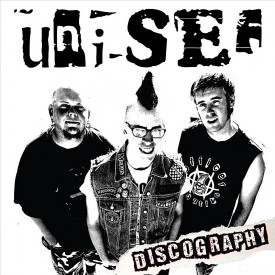 uniSEF was a 3 piece punk rock band based out of Boise, Idaho, that produced some of the finest JCHC music between 2004 and 2009.  Their Discography release includes all songs recorded by the band, including their Change the Word demo (2005), Can These Bones Live EP (2007), Death and Revolution split 7” (2008) and Ransom album (2009).  It also features several previously unreleased songs, acoustic versions and live tracks.  The album features 41 songs of fast paced, melodic hardcore and punk songs with influences by MxPx, Rancid, FBS and Five Iron Frenzy.

Discography CDs are available for purchase through the Thumper Punk Records webstore, and digital downloads can be obtained through iTunes and other digital retailers.  If you were part of the Boise scene, this is your opportunity to find everything you’ve been looking for.  If you missed this epic band, now is your chance.  Don’t let the world change you!  Change the World!