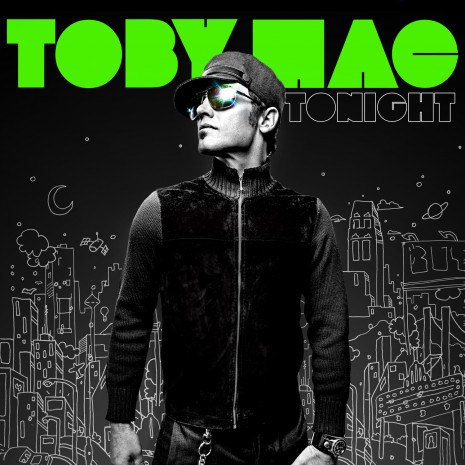 “TONIGHT” is getting a great head start this fall with TobyMac’s hit single, “City On Our Knees,” the fastest charting and selling track in his career.   The single has already sold over 133,000 copies and has hit No. 1 on the top 100 Hot Digital Tracks chart as well as on the Billboard Top Singles chart. In addition, it held the No. 1 spot on both the National Christian Audience chart for 9 weeks as well as SoundScan’s Christian Digital Track chart for eleven weeks.

“City On Our Knees” was fervently embraced at radio with 96 stations adding it to their playlist in the first three weeks, and sped to No.1 on AC Monitored and at CHR, while currently No.3 at AC Indicator.

Produced by TobyMac along with Chris Stevens (Portable Sounds), Jamie Moore (Ayiesha Smith,  Stephanie Woods) and Dave Wyatt (a.k.a. “D-dub) also his musical director,  TobyMac has spent the last two and a half years creating “TONIGHT,” in a recording process that he doesn’t take lightly:

“The recording process means a lot to me, and I don’t approach what I do haphazardly” he says.   “I have a lot of passion when it comes to my records. I don’t know if it’s good or bad, but there’s this range of emotions that come with making a record.  Music is something that can actually open people’s minds to who God is.  Music will never change the world, but God can choose to use music, and that’s what I count on. I want my songs to be said in a way that anyone can relate to them.  I want them to move people’s lives forward; move people toward God, and if I’m accomplishing that, whether or not anyone loves this record, as long as I feel like that is what I’m doing, then I feel like my job is done.”

As with previous TobyMac projects, “TONIGHT” also features special guest collaborations and a diversity of musical styles.  The title track brings in John Cooper of Skillet, while “Wonderin’” features Matthew Thiessen of Relient K, and Nirva Ready belts her vocals on “Changed Forever.”  A true highlight, and one of the most anticipated moments is with TruDog, TobyMac’s 10 year old son Truett’s, full song debut with the track  “LoudNClear.”

In an effort to offer only the best variety to TobyMac’s audience, “TONIGHT” will be available as a physical CD and in digital form, both of which will feature bonus remixes and behind the scenes video.

TobyMac is currently on the road on his annual Winter Wonder Slam tour and will announce exciting 2010 tour plans soon.

With all three of TobyMac’s solo projects receiving GRAMMY® nominations, his live CD/DVD taking home a GRAMMY® award,  and receiving 4 win as  a member of legendary group dctalk, the much-celebrated and acclaimed artist is now celebrating his fifth consecutive nomination with his new single, “City On Our Knees” receiving a nod for Best Gospel song.  The track will be included on TobyMac’s February 24th release, “TONIGHT,” and has topped the sales and radio charts faster than any of his previous singles, spending  8 weeks at #1 on the Christian Audience Chart.

Each of TobyMac’s studio releases,  “Momentum” (2001),”Welcome to Diverse City” (2004), and “Portable Sounds (2007),”  were awarded RIAA Gold Certification, with “Portable Sounds” making his highest solo debut ever on the Billboard Top 200 chart (No. 10), and hitting No. 1 on SoundScan’s Contemporary Christian Overall chart in its first week. Along with sold out tour dates, back-to-back radio hits, being named the GMA Dove Award’s 2008 Artist of the Year, and R&R’s Christian CHR Artist of the Year in 2007, TobyMac was nominated for a 2007 American Music Award as Favorite Inspirational Artist.   His song “Ignition” was also chosen to play during the 2009 Superbowl as The Arizona Cardinals entered the stadium in Tampa, FL.