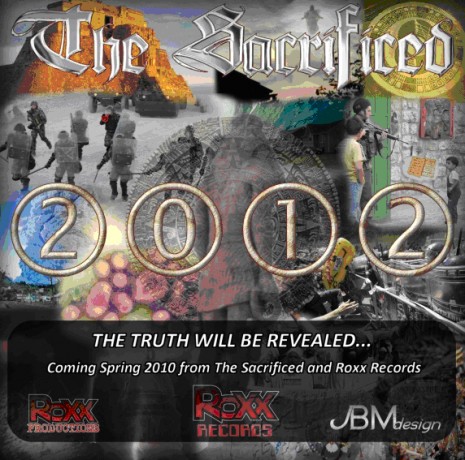 2012 … the truth will be revealed!!! Roxx Records is pleased to announce the recent signing of… The Sacrificed!!! All of your questions will be answered this spring with the release of the Roxx Records debut full length CD “2012”!

The Sacrificed, based in Lakeland, Florida have been together since 2005 and already have one independent demo CD entitled “The Da Vinci Hoax” under their belts. The demo has sold well and the band have been playing and getting rave reviews ever since! Now they are set to take the world by storm with the release of their most powerful release yet, “2012”.

While reminiscent of bands such as early Queensryche, Sacred Warrior, Haven and Deliverance, we assure you these boys are no copy cats or tribute band. The Sacrificed are not afraid to tell the truth, with brave, inspirational lyrics that illustrate their strong stance for what they believe in. Combine all this with a classic Power Metal sound and “2012” is sure to please.

Pre-Orders are going now, and you will want to get in early as the first 100 copies only will come with an exclusive demo disc comprised of the “The Da Vinci Hoax” and demos compiled from the bands pre The Sacrificed days when they were known as Sealed Fate and Sceptre.