The Great Transparency get SESAC honors 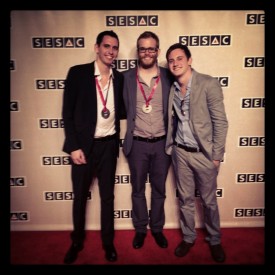 The Great Transparency (Razzbarry) recently traveled to Nashville to join some of the industry’s top artists and songwriters at the SESAC Christian Music Awards. Tommy, Jameson and Zack went to receive awards for their performances as SESAC writers and for their #1 Christian Billboard hit, “Rebuild Your Love.”

Christian songwriter/producer, Jason Ingram, was named SESAC’s Christian Songwriter of the Year due to the his ingenious work with such hits as “I Will Follow” by Chris Tomlin, “Strong Enough to Stay” by Tenth Avenue North, “Come Alive” by Ashes Remain, and “You Are” by Jason Castro.

The band was honored to be alongside such amazing professionals, and they feel incredibly blessed to be part of the SESAC family.

Razzbarry (Jacksonville, Florida) is an independent label and management company founded by Barry Blaze in 2007. Their current roster includes The Great Transparency, Code of Ethics, and Blaze’s solo worship venture as Barry Blaze.