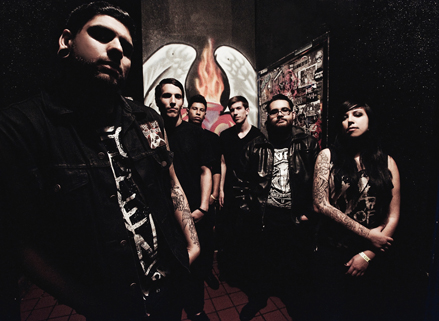 It has been around 2 years since I first got to see The Great Commission live. During my internship with HM Magazine back in 2010, I witnessed their amazing performance at the White Rabbit in San Antonio, TX along with Living Sacrifice and War Of Ages. The moment front man vocalist, Justin Singh, spoke into the microphone I knew this band was different. It appeared they had no shame in what they believed in and didn’t care what anyone thought of it. The passion and love they had for Jesus Christ was nothing but raw and unfiltered.

After their performance, I had to introduce myself to Singh and shake his hand. I explained how I’ve never seen any band be on fire for God like that before and that I wanted to create an article because he would have a lot on his mind.

A couple of years went by and I still hadn’t gotten this article together but after recently running into Singh again at Scream The Prayer Tour, its finally here. For this article I didn’t want to ask the typical questions such as: “How’s the band doing?” or “What’s your favorite pizza topping?”. I wanted to ask real questions. Questions that might make Christians nervous or tend to shy away from. This is what has been said.

For people who follow you on social media, it’s obvious to see you are into comic books. If you could watch in real life any characters fight each other, who would it be?

“Well first off, everyone should follow me on Instagram (@JustinCommish) haha or on Twitter (@TheGreatCommish) .Honestly out of all the possible scenarios of comic book characters I would much rather see a real life Angel and Demon fight. That would be more intense than any comic book I’ve ever read.”

Explain a little bit about yourself. Where were you born? How did you bring Jesus into your life? Etc…

“My real name is Allen but I go by Justin. I was born in sunny San Pedro, California. I like playing music, touring, comic books, and long walks on the beach. When I was at the lowest point in my life, the only thing that made me feel better was going to shows. Little did I know, that this one show I went to would change my life forever. At this show I met the real Jesus, and the Holy Spirit revealed to me that I didn’t have to live my life on my own anymore. I am a product of what God is doing in this music scene. That is one of the same messages I preach from stage.”

A lot of people bring up the theory that the teachings of Jesus are outdated because they were created for that certain time period. What are your views toward Christianity in today’s society?

“I don’t feel that the teachings of Jesus are outdated, I just feel that they can be misinterpreted a lot of times. I’ve had kids at shows come out and tell me that their parents/youth pastors/religious people tell them that they are going to Hell for wearing all black, listening to heavy Christian music, and for even having long hair. My views toward Christianity in today’s society are simple, it’s about personal relationship, not religion.”

The Great Commission comes out strongly with the beliefs that tattoos aren’t an automatic ticket to hell, as well as listening to heavy music. Why do you think some Christians  frown upon these life choices?

“Honestly…to quote Star Wars ‘They follow a dead Religion.’ When Jesus died, the old covenant law was broken and a new covenant began; a covenant where you didn’t have to follow a million religious rules to have a relationship with God. Like I said earlier, people twist the word of God, they will take something like ‘Don’t have markings on your body,’ and turn it into ‘You’re going to hell for tattoos.’ Where only a couple verses later, it is against Biblical law to cut your beard.”

Many Christians attend church but aren’t there spiritually and mentally. What is the true purpose of going to church and how can one at the same time “be” the church anywhere they go in life?

“I don’t believe that the Church is a building, I believe that the Church is the body of Christ. That’s not to say I don’t agree with people meeting in a building to fellowship and worship God. On many occasions I have run into people at shows, gas stations, malls, and even Walmarts, where we had fellowship and were able to encourage and build up one another in Christ. To me, where two or three are gathered in his name, Jesus said he is there. That to me is Church.”

In what role do you think Christianity should play in politics or should it not even be a part of it?

”I think that Christianity should play a bigger role in politics than what it is right now. This country was founded on the fundamental of ‘One nation under God.’. Over the past 40 years we have seen society slowly deter from those very ideals that the country was founded on. From discussion of taking  the word ‘God’ from the preamble to abortion. Now yes, we do have the right to free speech  but I think that is used more so now as an excuse. Leo Tolstoy said it best ‘Not only does the action of Governments not deter men from crimes; on the contrary, it increases crime by always disturbing and lowering the moral standard of society. Nor can this be otherwise, since always and everywhere a Government, by its very nature, must put in the place of the highest, eternal, religious law (not written in books but in the hearts of men, and binding on every one) its own unjust, man-made laws, the object of which is neither justice nor the common good of all but various considerations of home and foreign expediency.’ If we are to be the change that everyone talks about we need to rise up and take action. God changes people, Politics doesn’t.”

It is said that Christianity isn’t a “religion”,  but a personal relationship with a person and Jesus Christ. Emphasizing on the word “personal”, does that mean everyone has a different set of morals in their life with God? For example, gray areas in the Christian faith such as smoking and drinking. What are your thoughts?

“Yes, I totally agree, that it’s about having a personal relationship with Jesus Christ. I do believe that with personal relationships, come personal convictions. For instance, there are secular bands that I listen to, but there are some that I am convicted not to listen to. Paul, when he wrote to the churches, he wrote the letters based on different situations that the churches were struggling with. He also handled the problems in different ways. I personally do not drink or smoke, I do not believe that drinking or smoking is a sin. But the fact of the matter is these are 2 things that you should definitely pray into and ask yourself, are these things necessary in your life? Seek God’s counsel and follow your convictions. If you ask God, he will always answer.”

One thing that turns people away from loving God is the question “If God loves us so much, why are there so many bad things happening in the world?” What do you have to say to that?

“I don’t believe God ever does bad things to people. Sometimes I think we see them as bad because we see them with worldly eyes. It says in the book of James, that God will make good out of every bad situation. He is our defender and our healer, he is always looking out for what’s best for us. I would tell those people, who are blaming God, to ask God to show them the reality of the situation. Sometimes we can’t see the bigger picture, but he always does.”