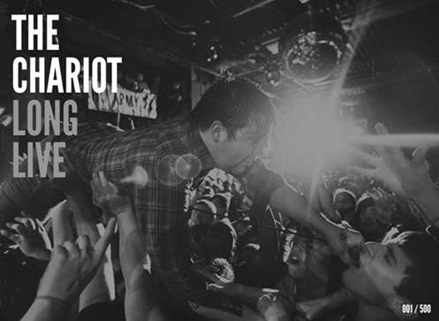 Georgia’s THE CHARIOT and PunkNews.org have posted the second of four exclusive video blogs in preparation for the release of the band’s new album, Long Live, on November 22nd. Head to this link to watch the video now! The band will release two more exclusive blogs throughout the remainder of the month at to-be-announced locations. Stay tuned for more updates on where you can catch the next video blog!

Shockhound.com is now offering the entire Long Live digital album for $6.99! Make sure to head over there to get your music now! The record will mark the first release for the band on their new label, GOOD FIGHT MUSIC. Behind the boards on Long Live is seasoned producer Matt Goldman (UnderOath, MyChildren MyBride, Four Letter Lie), who is known for his work on several past records by THE CHARIOT, such as Wars and Rumors of Wars (2009), The Fiancée (2007), Unsung EP (2005), and Everything Is Alive, Everything Is Breathing, Nothing Is Dead And Nothing Is Bleeding (2004).

A brand new group of pre-order packages have been made available for fans to purchase Long Live! See below for all of the packages, and purchase your bundles here!

The first 500 pre-orders (of any kind) receive a free signed, hand numbered silk screen poster (pictured above). Act now to get your bundle and poster before supplies run out!

THE CHARIOT will soon head out on a fall tour with CANCER BATS, taking them through eastern Canada and U.S.! The tour begins with some solo headlining dates from November 12th through November 17th, and the CANCER BATS join in on November 19th in Windsor! See below for all current dates!

The band was also recently added to the Peter Says Denim presented ‘Winterizer Tour’, featuring SILVERSTEIN, MISS MAY I, PIERCE THE VEIL, and A BULLET FOR A PRETTY BOY. The tour begins on Friday, January 7th in Clifton Park, NY. Make sure to see below for more dates!

Check out THE CHARIOT on tour this fall and winter!

***NEW DATES*** W/ SILVERSTEIN, MISS MAY I, PIERCE THE VEIL, BULLET FOR A PRETTY BOY

For more information on THE CHARIOT, please visit these sites: