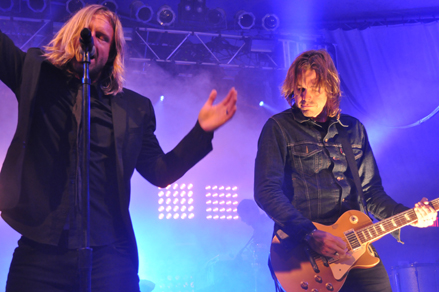 GRAMMY-winning rock band SWITCHFOOT will launch a North American headlining tour on March 22 in Kahului, HI. (See below for itinerary.) A ticket pre-sale for members of the band’s fan club, Friends of the Foot, is underway at www.switchfoot.com.

Next week SWITCHFOOT heads to Australia and New Zealand, where they will headline the traveling Soundwave Festival. They’ll also be capturing footage for Fading West, the San Diego-based band’s upcoming surf film, which will feature numerous other incredible surfing locations SWITCHFOOT has visited on its world tour.

On March 20, NBC SounDiego + Living Social present “An Evening with Switchfoot at La Jolla Playhouse.”  SWITCHFOOT and producer Neal Avron (Sara Bareilles, Weezer) will discuss the making of their latest album, Vice Verses (Credential Recordings/lowercase people and Atlantic Records). The evening will also feature a Q&A and meet-and-greet session. Tickets will be available on February 22 exclusively through www.livingsocial.com.

On Record Store Day, April 21, SWITCHFOOT will release a limited edition CD entitled Vice Re-Verses. The EP will feature remixes of songs from Vice Verses by Paper Route, Owl City’s Adam Young, Photek and Darren King. A digital version of Vice Re-Verses will be released on May 1 and will include a remix of the band’s new single, “Afterlife,” by the winner of the Switchfoot Remix Contest, which is underway now at http://www.talenthouse.com/remix-for-switchfoot and sponsored by Ultimate Ears.

SWITCHFOOT – comprising Jon Foreman (vocals/guitar), Tim Foreman (bass), Chad Butler (drums), Jerome Fontamillas (keys/guitar) and Drew Shirley (guitar) – has begun making plans for the eight annual Switchfoot Bro-Am will be held on Saturday, June 16, at Moonlight Beach in Encinitas, CA. The event will feature surfing contests, a live art mural created by local artists and a live concert. It will benefit San Diego area chapters of StandUp for Kids, a non-profit organization dedicated to making a difference in the lives of at-risk and homeless youth (www.standupforkids.org). Further details will be announced shortly. The event has raised more than $500,000 to date for San Diego-based children’s charities, including StandUp for Kids.

WITH SPECIAL GUEST THE ROCKET SUMMER