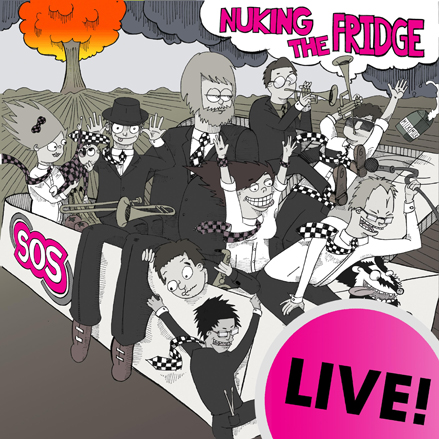 Through 7 years of gigging, worshiping and developing together, SoS have honed the art of bringing their extensive catalogue of Ska injected Rock-Worship to uproarious life on stage, helping them to become “British festival favourites” (Peter John Willoughby); “Going to see Sounds of Salvation is a Greenbelt must” (Matthew Lynch).  On the back of their critically acclaimed EP, Nuking the Fridge, the band undertook a UK tour in November and December 2011 and the energetic recordings taken at those dates are what feature on their FREE release. As Greg Sammons (Cross Rhythms) puts it “There’s really only one way to enjoy the joyous large sound of Reading’s Sounds Of Salvation, live and whilst skanking”! The band now bring this experience one step closer to home!

Comprising a set-list of 14 songs drawn from their entire discography (recent release Nuking the Fridge “Their best so far” (Barry; Amazon), 2008’s S’ka Gjë and even one track from the band’s debut recording, 2006’s Like It Is), and incorporating some re-workings of well known worship standards, Nuking the Fridge LIVE! is a true to life reproduction of what the band does best; leading people in worship in a unique, lively, loud and fun way.

Wanting to give something back to all the people who have attended a live show over the years, this recording is available for FREE via Bandcamp (http://soundsofsalvation.bandcamp.com/). At the time of downloading there is an opportunity to contribute to the bands recording fund, to enable completion of their next studio record, expected late 2012 and being produced by Dez Minto (yFriday) at Broadwater Studios in Exeter.

Having already tracked some of the new material, Dez says “After my deliberate year’s break from Christian music, what a perfect way to come back by working with the SOS guys! Great hooks, massive dynamic and a unique, unpredictable lyric often far removed from the standard we’ve all become used to. A real raw burst of energy that the UK and Europe are going to love!”