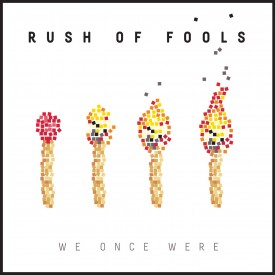 The wait will soon be over as one of the most highly acclaimed bands in Christian music, Rush Of Fools, gears up for their debut album on eOne Christian with the release of We Once Were on September 27, 2011. Produced by renowned mainstream producer, Dennis Herring (Counting Crows, Modest Mouse, Elvis Costello) and one of Christian music’s highly respected producers, Rusty Varenkamp (Tenth Avenue North, Aaron Shust), this new offering from Rush Of Fools brings the most creative project of their career with twelve new songs co-written by the band’s ASCAP Song of the Year award-winning songwriters. The tunes focus on the individual and collective struggles the band has faced over the last two years with their label closing and an ensuing lawsuit that was settled, in their favor, in 2010.

“We can’t go back to what we were before because we were heavily changed by the events that occurred along the way,” states guitarist Kevin Huguley. “We can only go forward from here. We learned how to count it all joy by writing songs in the midst of the storm. And what we hope and intend for all who listen to take from it, is that at the end of the night, it will be all right. There’s a bigger story going on here. It’s bigger than our shattered dreams. It’s bigger than our mistakes and failures. It’s bigger than us, because it’s not about us. That’s what makes this record the greatest in our history. Had we not walked through so many trials in the past two years of our career, we would never have the songs that are on this record. ”

With stellar production, the band’s immense talent and continued strong support from fans and Christian radio, Rush Of Fools is once again finding themselves rapidly climbing the charts with their first single from the new album, Grace Found Me. The song debuted at #30 at AC Indicator after only three weeks of airplay, and is currently #30 on the National Christian Audience chart. The momentum continues to build as the song can be heard on familiar stations like WDJC/Birmingham, AL; SOS Network/Las Vegas, NV; WBSN/New Orleans, LA; WJQK/Grand Rapids, MI; and K-LOVE Network, just to name a few. In a rare move, K-LOVE immediately added the song to their playlist and is making it available as a free download for the next two weeks. In the first week, over 20,000 fans have taken advantage of the offer.

“The very first time we played the song, we received a call from a woman celebrating five years of sobriety,” explains Scott Herrold, Morning Show Host/Program Director, SOS Radio. “She said, ‘It’s ironic that you played that song because five years ago today grace totally found me. I wasn’t looking to go to church, I didn’t understand how God forgave me, but I listened to SOS Radio and found encouragement. It led to plugging into a church that celebrates God’s grace and that song totally encouraged me this morning!’”

The entire album shows a maturity and growth for Rush Of Fools with their vocals, musicianship and songwriting that brings twelve solid hits in one package. The songs can have a comfortable audience in a church or a mainstream venue, as they talk about the healing that comes after our darkest hours. A message of hope in a burdened world that is conveyed so well in the title track: No way, no way/We can’t stay the same as we once were/Living in the blur/Looking backwards we can see that we’ll never be who we once were.

No stranger with mainstream media, Rush Of Fools’ last project brought a mainstream Top 10 hit along with major media coverage from WGN, Daily Buzz and CNN.com. We Once Were will once again cross the musical boundaries by being featured in Billboard and Mix Magazines in-studio stories, along with HearitFirst.com, CCM and TBN’s 1 Music Village interviews/performances coming up this month. For additional updates on Rush Of Fools please visit their website, www.rushoffools.com.

About Rush Of Fools

The group hails from Alabama and burst onto the Christian music scene in 2007 with their self-titled debut project. The first single from the album, “Undo,” became a world-wide mega-hit for the band by reaching #1 on the charts for an incredible seven weeks. The tune became Song of the Year by ASCAP and Radio & Records for the most number of spins at radio, and garnered four 2008 Dove nominations for the band. The following single, “Peace Be Still,” remained at the top of the charts for three weeks. Rush Of Fools’ sophomore album released in 2008 and broke them into the mainstream market with their hit single, “Never Far Away” (with Jim Brickman) which broke Top 10 on the mainstream AC charts, along with appearances on the national television outlets, WGN Midday News and the syndicated morning show, Daily Buzz, along with coverage on CNN.com. Rush Of Fools continues to be an active touring band with over 120-dates a year and they recently concluded their first European tour. The group is managed by Patton House Entertainment with exclusive booking through the Greg Oliver Agency.

eOne Christian Music is dedicated to the support of culturally-relevant and ministry-focused artists. Established in 2005, the Christian division of eOne Christian Music is fast becoming an emerging voice in Christian music with a roster including The Myriad, gospel chart-topper William McDowell and the recent signings of strong emerging talent such as Rush Of Fools, Echoing Angels and Nathan Tasker. eOne Christian Music is distinguished by their strong focus on artist development, their commitment to building relationships with artists and their goal to build lasting ministries, while making a difference in both the music industry and the global community.