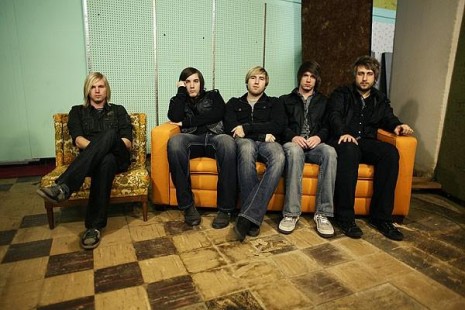 Taking their name from the Biblical cities of refuge, which God established through Joshua, Runaway City hopes “to be an escape for people from whatever they may be going through, even if it is for just a 3 minute song” according to their MySpace page.

The rapid rise of Runaway City, the flagship band for Vertusent Records (founded by Derek Graham, a former Wind-Up employee who has worked with Creed and Evanescence among others) might lead to the misconception that these guys have had it pretty easy.  Even the band admits to a case of whiplash.  “We have been extremely blessed with all the doors that God has opened in the past year.  This process has happened so fast for us that it’s easy to miss all the details along the way, but we know God has had His hands in this from the beginning and we wouldn’t be here without Him,” states guitarist Tyler Ricketts.

“The beginning,” however, saw Runaway City rising from the ashes of three prominent North Carolina based bands, Fighting Instinct, Chasing Daylight, and Layden, all of which had decided to call it quits in early 2009.  Although each member (including vocalist Josh Edwards, guitarist Jace Bowman, drummer Chris Burrow, and Ricketts) lamented the demise of their bands at the time, the smooth transition into Runaway City has kept them from looking back.  “We all knew each other through mutual friends and had played several shows together in our former bands.  It was perfect timing and there was no doubt this was the direction God was sending us,” Ricketts says.

Graham found the band through their MySpace page and worked quickly to sign the band.  Within six months of forming they had posted the song “Fade,” which has since become their first single, met with Graham, and begun working on their national debut cd.  Jason Elgin (Maylene, Collective Soul) was tapped to produce at Synchromesh Studio in Birmingham, AL.  Ricketts says of the experience of working with Elgin, “He really pushed us as a band and brought out all of our individual strengths.  It was a blast working with him.”

The resulting cd “Armored Heart” is “an album with a message of hope that we believe will provide encouragement to people through whatever they may be facing in life,” Ricketts states.  It’s a message that Runaway City will continue to spread on a fall tour with friends Decyfer Down, a band whose own TJ Harris has been a big proponent for them due to his association with Burrow from their days together in Fighting Instinct.  Their desire as a band is to point listeners to the One who provides the ultimate refuge – the kind that the ancient Biblical cities only foreshadowed.