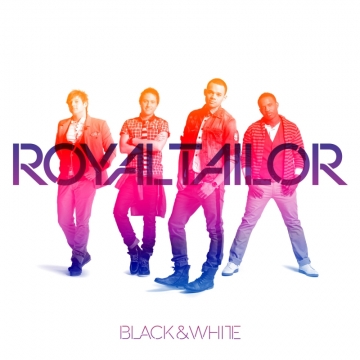 Essential Records’ newest signing, pop/rock band Royal Tailor will release its label debut, Black & White, June 7, 2011.  The album’s debut single, “Hold Me Together,” is already garnering early momentum at radio, while the band has been selected to perform at The Recording Academy® Nashville Chapter’s GRAMMY® Block Party on May 10.

Produced by Aaron Lindsey, Chuck Butler, and Daniel Kinner, Black & White showcases Royal Tailor’s distinctive musical blend, highlighting influences that range from Bruno Mars to Maroon 5 to Michael Jackson.  The result is 11 high-energy tracks that make audiences want to dance, pray, shout and sing along.  Band frontman Tauren Wells comments, “We like to get down. If you ever spend any time with the four of us, at some point we’re going to turn up the music, and we’re going to have a good time. That’s just who we are.”

But the band’s feel-good music has an equally attractive message. Having spent a year mentoring youth at its church in Granite City, Ill., and continuing to minister to young people while out on tour, Royal Tailor takes the plight of this generation seriously.

“We were personally working with these kids and dealing with their issues,” says Royal Tailor bassist Blake Hubbard. “I think we learned a lot about our calling and what kids were really going through.”

Consequently, songs like “Gravity (Pulling Heaven Down),” offer a unique perspective on life’s challenges by reminding the listener how difficult times draw us closer to God.  The buoyant anthem “Control,” which references hits by Ke$ha, Lady Gaga and Katy Perry, encourages youth to stand up for what they believe with the same boldness as nonbelievers who are pushing the world’s agenda.

“This record is pressing against the flow of the mainstream,” says Wells.  “There are so many songs and influences out there today poisoning the culture. We hope to be a remedy to that, to show people it doesn’t have to be this way.”

The album’s first single, “Hold Me Together,” which released to Christian AC and CHR April 15, is already winning fans at radio, capturing an additional two adds at CHR and seven adds at AC this week, including AIR 1 and WAY-FM Networks.

This early radio impact is reflected in charting positions, moving the single 20 slots in one week to No. 26 on the Billboard National Christian Audience chart.

Network Program Director at WAY-FM, Jeff Connell comments, “Since the first time I heard ‘Hold Me Together’ I was struck with two thoughts. First, there is NOTHING else that sounds like this…such a unique fresh sound.  Second, when the heck can I start playing this song…it’s a smash!  This is the perfect record for us.”

The band also has been tapped to perform at NARAS Nashville’s 13th annual GRAMMY® Block Party on Tuesday, May 10.  Known as the event that launches the summer music season, the Block Party gives industry folks a chance to mingle while enjoying a great variety of live music.  Other artists scheduled to appear include Laura Bell Bundy, The Civil Wars, Denny Jiosa, Jerrod Niemann, Old Crow Medicine Show, and Chancellor Warhol.

Royal Tailor is currently debuting new music from Black & White on the road, having just wrapped up the 20-city “The Overcome Tour,” which also featured Fireflight, After Edmund and Hyland.  For a complete list of tour dates, visit royaltailoronline.com.