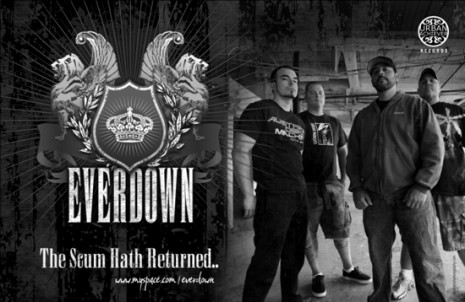 Name 3 bands that, had they not released a certain album at a certain time … and you would not exist as a band.
Helmet, Prong , Only Living Witness and Nothingface.

If there wasn’t music, what skills would your members use and what would they do?
Well – all the guys are really creative in the arts, graphic design and I am a landscape designer and and love to create with natural stone.

When asked to describe your band by comparing yourself to others (the dreaded “Recommended if you like” question), who would you list?
That is easy, we have no problems with that kind of question, everyone sounds like another band, unless you were rockin the 60’s and 70’s. Everything now is just another take off from something else. but we would be compared to – handsome, Helmet, Prong at times Only Living Witness and we have been told many times Erik (the singer) sounds like John Bush (Armored Saint and Anthrax, which is fine with us).

What’s a secret or little-known fact about your band (or one of your band members) that would make you the darlings of the music world if we all knew it?
Well right before our tour for straining I broke my ear drum with a Q-tip … because was trying to breakdance while I was cleaning my ears. pretty funny. And then at Cornerstone supporting Sicken our singer was really Sick… and needed to go!! And was trying to hold it. He dove off stage during a sick breakdown to surf and well … it all came out. We still had 20 minutes to play….

If there was another band and another album that you could give everyone as a present for Christmas, what album would that be? Why?
Phil Wickham’s sing-along worship album, amazing uplifting cd, and then I would have to follow it up with … Embodyment’s Narrow Scope of Things. I love them.

What is one belief, conviction, idea, or passion that you honestly think might’ve been deposited inside you or given to you by God?
The gift of giving. I have been blessed by God in so many ways all my life and I love to do for others as much and as often as I can. Usually nameless.

What’s one of the most memorable things (either good, bad, or funny) that’s happened at one of your shows?
To many to really mention, but we had a blast doing East Coast shows with Mortal on there Fathom tour and there was some crazy times when we did a bunch of shows with Sacrament. Wow I have just really dated myself.

If you had a chance to perform for most of the televised world and play just one song, which song would you play … and why?
Really, any our new material we are writing, but for older stuff – would have to be “Unleaded” from Straining, great live tune and usually fired up some insanity for the crowd.

If a super surgeon removed all of your emotions and the ability to feel any emotion for the rest of your life, which one or ones would you most want to have back? Why?
Emotions… I am a father of 5 girls. I need all I can get to survive, but I need to be able to love.

If you could ask God one question, what would you ask Him?
Too many questions to ask, I would like to just hug him and say thanks.

What’s the best video on YouTube (like, if our readers had to type in a word or a few to search it, what would the keywords be?)??
http://www.youtube.com/watch?v=xVPfhNschSs. So funny. Check it out.

If someone came to you and said, “Hey! I need to make some changes in my life…Help me out! I’m going to take one piece of advice from you and apply it to my life and/or make it a habit for 30 days. What would that piece of advice be?”
Well, if they are not a Christian, then I would say let’s get you in a relationship with God, and your life should come into place.

In 4 sentences or less, explain how your band came to exist. (and give us a date).
1992, Manchester, New Hampshire in Erik’s garage. Erik, Nate, Brian at the time and myself were all fans of metal and buddies, so we just said … ‘Let’s start writing meal together, we were all in other bands a not happy.’

What are your names, instruments, album titles (or song titles if no albums recorded), and location/hometown.
Erik – vocals / Chris drums / Becht – bass / John guitar and vocals / Greene – guitar and vocals. Manchester, New Hampshire – Everdown – Shelter; Everdown – Sicken; and Everdown – Straining and the new single release in july. Our new album will be out spring 2010 plus two eps and a 7″ as Crawlspace then name changed to Everdown.

What is the release date of your next (or latest) album? Or what is the next big date on your band’s calendar?
New album will be spring 2010 with a short tour to follow. We are also playing the opening of a huge local moto cross track in october.

What’s one question you’d always wanted to be asked in an interview? (and please provide your answer)
Who would you love to tour with? – That is really simple would love the line up to be as such – Helmet, Prong, Nothinface and Everdown!