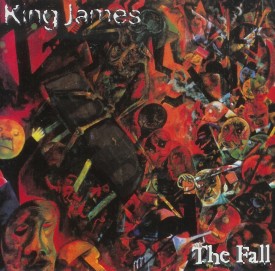 ABOUT THE ALBUM
Formed from the ashes of the ’80s Christian rock band Whitecross is King James, established by guitarist Rex Carroll in the early ’90s. Carroll, who is a two-time winner of the Dove Award as well as a five-time HM Magazine Critic’s Darling for his fierce guitar work, wanted another creative piece in which he could musically develop. Together, with vocalist Jimi Bennett (ex-Sacred Fire, Viktor) and Stryper alumni, Robert Sweet and Tim Gaines, King James was born and soon inked a deal with Star Song Records to release their eponymous debut in 1993.  Four years later, after a long break and regrouping, King James issued the sophomore effort entitled The Fall in 1997. The 2010 Collector’s Edition from Retroactive Records includes a much needed facelift with all new artwork in addition to a full-metal remaster by the amazing J Powell (Titanic, Final Axe, Bride and Malice).  This album was originally released in Europe, then twice in the USA – and they sold so fast that this classic has been out of print for almost ten years.  That means it’s a great album and there’s demand for it!  The music is mean and the guitars are nasty, reminiscent of the aggressive metal of Alice in Chains, Soundgarden, Holy Soldier and Black Sabbath. The Fall features a haunting, ponderous sound that sometimes flirts with the sophisticated progressive elegance of Queensryche.  It’s definitely a moody, portentous affair, filled with plenty of inspired riffing from Rex and hair-tossed wailing from Jimi!

Scott Waters/Ultimatum:  “Rex and Jimi Bennett together create a monster of a heavy metal record. A couple songs even come off as doomy, not unlike Trouble.”

NoLifeTilMetal.com: “Rex Carroll is known for his guitar shredding antics. To confine him to just playing simple riffs would be a crime. Thankfully, King James didn’t follow this trend and Rex unleashes plenty of guitar fury on the album. All in all, King James plays on the strength of guitarist Rex Carroll!”

KEY SELLING POINTS
**Full promotional/magazine campaign
**Rex has a significant and loyal fan base established over touring the world 6+ times with Whitecross
**Active touring band / Plans for a new release in 2010/2011
**Special liner notes written by Rex for the fans
**For fans of Whitecross, The Rex Carroll Band and towering heavy metal! ABOUT THE ALBUM
The band recorded their southern/progressive rock masterpiece debut Mountain In the Sky (1984) in Pat Travers’ studio.  The ’84 Vision release features Lynyrd Skynyrd members, Leon Wilkeson (bass) and Billy Powell (piano), who were trying to cope with life after the tragic 1977 plan crash that killed three members of Skynyrd (and injuring the others) while the band was at the height of its popularity.  Powell would tell the story of how Wilkeson had been pronounced dead at the scene when a “spirit-filled nurse laid hands on him and raised him from the dead.”  Vision was where both men would find further healing, strength and help from the Almighty.

Powell would continue playing with Vision after the band signed with Heartland Records for a sophomore self-titled release in 1985.  Five tracks from the debut would be completely re-recorded from the ground up, with significant differences in arrangement and production now that they were with a major label.  Five other newly penned songs were also recorded, one of which was the anthemic “Standing On the Rock” which Heaven’s Metal Magazine editor Doug Van Pelt would go on to claim was, “one of the absolute best Christian rock songs of the era.”  Powell’s keyboards, which made Skynyrd’s sound one of the most distinctive in rock and roll history, help Vision’s sound resonate with power and authority.  Marshall’s crystal-clear rock voice (a la Steve Perry or Dennis DeYoung) brings clarity to a powerful message that continues to inspire and move people today.  Vision put together all the necessities of a truly great rock band, combining elements of art rock with solid guitar-driven stadium rock.  Marshall and company created a unique sound all their own that still sounds good 25+ years after it was first recorded!  With prime riff-rockers from start to finish, this album is rock perfection.  Steve Holland (founder of Molly Hatchett) is quoted as saying, “Vision – I don’t need no stinking Vision. I’m blind as a bat as it is….but this old bat has great hearing!  And that’s all you need to know with these guys!  Wow!”  Beyond the tragedy, the history, the raging guitars and the killer songs, ultimately, VISION is about an indomitable will; about survival of spirit; unbowed, uniquely American and stubbornly resolute.  After 10 years of reissuing Christian rock and metal classics, this long out-of-print album has consistently been one of our most requested reissues.  That’s why the label is thrilled to reissue it on CD for the very first time, remastered, with exclusive and insightful liner notes and 100% rock!  For fans of Kansas, Styx, Mylon LeFevre and Lynyrd Skynyrd! ABOUT THE ALBUM
In 1983, an Assembly of God youth pastor in Florida asked some of his kids to form a band and put on a concert for their youth group.  Before long this youth group band would include people of great fame and notoriety who would give great witness of what God had done in their lives.  Lead singer Rocco Marshall’s long-time friend, Leon Wilkeson (bassist from Lynyrd Skynyrd) joined the band. Before long, Leon’s Skynyrd bandmate, pianist Billy Powell, was in jail for a 5th DUI and he asked Leon to visit him. Leon played Billy a Vision song called “Fight the Good Fight”.  The song had such a powerful effect on Billy that he immediately joined the band!

Vision now had an impressive pedigree, featuring two members of mainstream rock super-stars, Lynyrd Skynyrd! By 1984, the band would record their debut record as a custom self-titled release (now titled Mountain In The Sky, recorded in world renown guitarist Pat Travers’ studio with the Full Sail Dream Machine).  With no distribution or promotion, this ’84 release has been ultra rare and collectors have been willing to pay hundreds of dollars for this classic rock masterpiece. The album is 9 songs of wall-to-wall brilliance – chock full of explosive vocal arrangements and indelible guitar riffs.  Clearly cut from the Seventies, (Kansas, Boston, Blue Oyster Cult) Vision knew how to bring it with infectious hooks, marked progressive rock edges and a huge, biting, melodic guitar attack full of hope-filled lyrics that cut to the heart!  The Collector’s Edition exclusive bonus tracks for the Born Twice Records release are two powerful testimonies from Leon and Billy, sharing from their hearts about the difference God made in their lives.  This super-star studded band would go on to release a second album on Heartland Records in 1985 featuring several songs from Mountain In The Sky that were completely re-recorded (and quite different) for that album.  In the words of HM Magazine editor, Doug Van Pelt (who contributes special liner notes in the reissue, “I’m confident that, like me, you’ll be really glad to hold this CD in your hands right now. It’s re-release-worthy classic material, indeed.” THE REX CARROLL BAND – “THAT WAS THEN, THIS IS NOW”

Band:  The Rex Carroll Band
Title:  That Was Then, This Is Now
Label:  Retroactive Records

ABOUT THE ALBUM
Like a lumbering freight train, The Rex Carroll Band got started slowly (they have been playing live shows since 2004) following the success of 80’s Christian metal legends, Whitecross, where Rex established himself as a guitar virtuoso of epic proportions (2 Dove Awards & 5 consecutive HM Readers Guitar Hero Awards).  But, Rex grew up in the 70’s rock scene where he was profoundly influenced by blues and southern rock standouts like The Allman Brothers Band, ZZ Top, Stevie Ray Vaughn and Jimi Hendrix.  It is with great joy that Retroactive Records releases That Was Then,This is Now as the debut disc from this Chicago power trio that fuses Rex’s fierce guitar skills with soulful, imaginative and heavy blues.  “Foolsgold” is a scorching guitar instrumental showcasing Rex’s axeman-ship full scale (ala Eddie Van Halen or Yngwie Malmsteen) and it serves as the perfect intro to the riff-heavy “Working Man Blues”.  While this album will appeal to fans of Kenny Wayne Shepherd and Stevie Ray Vaughn, the mind-blowing, bluesy guitar heroics from start to finish establish The Rex Carroll Band as the choice band for those looking for air guitar inspiration!  Get your leather vest and fire up your Harley Davidson, because the blues tradition has just been elevated to a new level.

Brian Quincy Newcomb, ucc.org/news: “Rex Carroll has always been a serious guitarist, capable of shredding up a serious storm with amazing nuance and delicacy. But his playing exhibits not merely power, but a rich appreciation of melody and emotion, which more than suits the bluesy tenor of his latest music.”

DangerdogMusicReviews.com:  “Drawing from diverse and formidable roots, Rex Carroll delivers emotional and fiery guitar work on his latest creation. From neo-classical metal fireworks to rough and tumble gritty blues, Carroll is the real deal and worth every minute of your time.”

Ken Tamplin/Shout: “Rex has sustained the art of great guitar playing throughout the years. It’s more than obvious that Rex is on fire and his light shows no signs of dimming.”