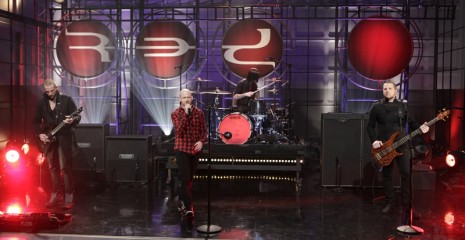 On the heels of a riveting performance on “Conan” last week, Nashville-based rock band RED took the stage on NBC’s “The Tonight Show With Jay Leno” with a powerful version of its moving ballad, “Not Alone.”

To watch the performance please click on the link below, provided by “The Tonight Show with Jay Leno.”
http://www.nbc.com/the-tonight-show/video/wednesday-february-16-2011/1295633/?tin=2308
In addition to the high profile, national television performance yesterday, the band
also celebrated news that it received a Dove Award nomination in Rock Recorded Song of the Year category for “Start Again” from its GRAMMY nominated Innocence & Instinct project.
About RED:
Nashville-based rock outfit RED, made up of MICHAEL BARNES (vocals), ANTHONY ARMSTRONG (guitar) RANDY ARMSTRONG (bass) and JOE RICKARD (drums), has logged an impressive 1,300 + live shows since releasing its debut album End Of Silence in 2006.
Since the emergence of the band’s debut, RED has delivered two Top Ten Active Rock singles, Three Top Ten Mainstream Rock singles and nine consecutive No. 1 hits at Christian radio. In addition, the band has maintained a near-constant presence on the road, performing alongside notable rock names such as Hinder, 3 Doors Down, Creed, Breaking Benjamin, Three Days Grace, Godsmack, Sevendust, Drowing Pool, Flyleaf, Seether, Papa Roach, Buckcherry, Saving Abel, Staind, Third Day, Switchfoot, Skillet and others. Rave reviews for the band’s live shows and albums have been featured in top media outlets including USA Today and Billboard.
The band has sold more than 700,000 albums across its first two album projects, both of which were GRAMMY nominated. RED’s sophomore project Innocence & Instinct released with first-week sales of nearly 40,000 copies, according to Nielsen SoundScan, which made it the No.15 best selling album on Billboard’s Top 200 chart that week. It also reached the No. 5 spot on iTunes Overall Albums chart. To date, Innocence & Instinct has scanned more than 260,000+ units. The sophomore project built on the momentum of its debut album End of Silence, which has scanned more than 400,000 units (including track equivalents) and earned several awards and nominations.
RED’s Until We Have Faces (2/1/2011) was the highest debut in the country with the No. 2 spot on the coveted Billboard Top 200 its first week out. The project also claimed the No. 1 spots on the following Nielsen SoundScan charts: Current Hard Music, Current Rock Music, Current Alternative, Christian Rock, Current Contemporary Christian Album and Record Label Independent charts. Further, Until We Have Faces remained in the Top 5 on both iTunes’ Overall Album and Rock Album charts its entire street week.
Launched with massive online marketing and press campaigns, Until We Have Faces quickly yielded “Faceless” as its first No. 1 radio single – the band’s 11th No. 1 radio hit – all while receiving a flurry of media coverage in major entertainment and news outlets. The band’s street week culminated with a riveting performance of “Faceless” on TBS’s “Conan” Feb. 8 followed by a moving delivery of its power ballad, “Not Alone” on NBC’s “The Tonight Show With Jay Leno,” Feb. 16.
RED continues to unleash a torrential outpouring of its signature in-your-face rock as it tours the country as a part of the Winter Jam lineup through early April.
For more information about RED, please visit: www.redmusiconline.com.
For Red’s Behind-The-Scene’s video, click here: http://www.youtube.com/watch?v=gm2elQizlGE.