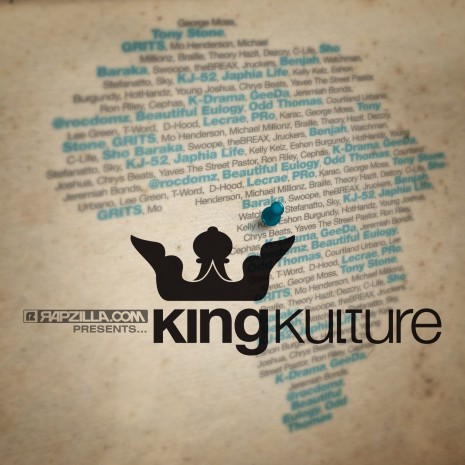 RAPZILLA.COM ANNOUNCES ‘KING KULTURE’ FOR A CAUSE

Rapzilla.com Announces ‘King Kulture’ for a Cause
The All-Star Compilation Album Gives Back to a School in Africa

Christian hip hop is making a difference for African students in the Congo this winter. Premier music web site Rapzilla.com in conjunction with Syntax Distribution releases the compilation album King Kulture on January 31st. Proceeds from the album benefit Ecole de la Borne, a school in the Congo started by Christian missionaries.

The idea came about when Rapzilla founder Philip Rood and his team were looking for ways to expand the web site’s charitable reach. “We wanted to give proceeds from a project to some kind of charity in Africa,” Rood says. “It hit me that my grandparents are missionaries in the Congo. We can do something with them.”

Rood’s grandfather, Jacques Vernaud, was born in the jungles of Africa and started preaching in the 1950s. He married a medical missionary nurse, and their ministry work thrived through church planting. In 1981, the seeds for the school were planted when the Vernauds started ministry targeting the French-speaking people of the Congo.

Vernaud became known as a church planter and a significant figure in the evangelical history of the Congo. But it didn’t stop there. By 1989, he and his wife established the Christian Congolese kindergarten Ecole de la Borne in Kinshasa, Congo. It expanded to an elementary school five years later. Today, Ecole de la Borne also has a high school with nearly 400 students in total where Children receiving a Bible-based.

“The literacy rate in the Congo is 66% versus 99% in the United States,” says Rapzilla co-owner and editor-in-chief Chad Horton. “We’re doing a project that is going to benefit people in the Congo who haven’t been afforded the same opportunities that we have.”

Rood adds, “We wanted to get involved, so we decided to help out the school with scholarships. However, once I visited the school in person, I realized they need a lot more than scholarships. We are helping in that area, but they also need building improvements, more classrooms, and basic supplies.”

That help came in the form of an all-star compilation album. King Kulture is a two-year project in the making. It features never before heard tracks from Lecrae, KJ-52, GRITS, Braille and more.

“You’re going to get an album that’s amazing with all the artists you love and all these songs you can’t get anywhere else,” Rood says. “It’s a must-have for any Christian hip hop fan, but also what you’re putting into is helping others.”

“This is something that hasn’t been done in Christian hip hop before, everyone coming together for a cause,” Horton says.

Syntax Distribution will be putting its energy behind King Kulture. CEO Tim Trudeau is excited to work with his longtime friends on this cause oriented project and had this to say:

“For most of my involvement, Christian hip hop has poked its head into anywhere and everywhere, waving its hands just trying to get noticed. Now that it’s gained some decent traction and developed respect, it has a responsibility to steward this platform,” Trudeau says. “To me, this is exactly what King Kulture is doing. It’s synergizing any notoriety that Rapzilla has, any brand power the artists on this project may have, any industry clout that Syntax may have developed and putting it all together to raise money for something bigger than all of us.”

Vernaud died in the fall of 2011, but the legacy of La Borne lives on. Through the efforts of Syntax Distribution and Rapzilla, listeners can help his mission to evangelize Africa and share the Good News of Jesus Christ.

Established in 2003 by a 15-year-old missionary kid in Belgium,  Rapzilla.com is the leading news and media outlet on the web dedicated to covering rap and hip hop artists promoting Christ.  In the last two years Philip Rood and partner Chad Horton have seen a 550% growth in unique visitors, and currently receive over 100,000 unique visitors to the site monthly.  The pair have launched the first Christian Hip Hop iPhone & Android applications, a webstore focused on urban street wear, and are releasing their first music compilation album January 31st, 2012. To learn more about Rapzilla, visit: rapzilla.com.

A division of Quality Junk, Syntax Distribution is a digital distribution and aggregation firm based in San Diego, California, handling many of the top independent artists such as David and Tamela Mann of Tyler Perry’s Meet The Browns and Disney’s Next Big Thing winner Jasmine. Their record label clientele includes Central South, Crossroads Music, and Bema Media, among others. To learn more about Syntax Distribution, visit: syntaxdistribution.com.