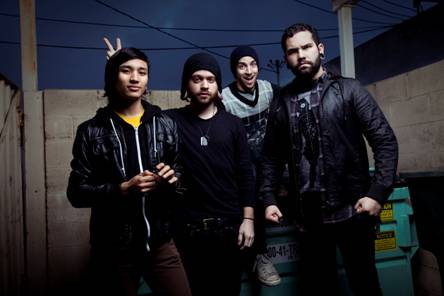 MYCHILDREN MYBRIDE has released a brand new track, ‘Terra Firma’, off of their upcoming Solid State Records release, Lost Boy. The record hits stores June 8th, 2010, and the new track can be found at the band’s MySpace page. Also on the horizon for MYCHILDREN MYBRIDE is a month-long tour with HASTE THE DAY and UPON A BURNING BODY! See below for all upcoming tour dates.

Lost Boy is the eagerly-awaited follow up to 2008’s critically acclaimed Unbreakable. Unbreakable has sold an impressive 30,000+ copies in the United States alone, and has generated two music videos. MYCHILDREN MYBRIDE’s most recently released video for ‘On Wings of Integrity,’ shot at The Waterfront Tavern in Holyoke, MA, received over 60,000 views in less than 24 hours. Lost Boy was recorded at Glow In The Dark Studio in Atlanta, Georgia by producer Matt Goldman (UNDEROATH, COPELAND, and THE CHARIOT).  The new record recalls both the vehemence and sincerity of 2008’s Unbreakable while progressing in musical maturity.

With a hectic touring schedule both leading up to and following the release of Lost Boy, MYCHILDREN MYBRIDE are sure to be busy in 2010. In addition to dates with HASTE THE DAY, MYCHILDREN MYBRIDE will be performing at a festival near you! Check out their current tour dates below:

ON TOUR WITH HASTE THE DAY, UPON A BURNING BODY:

Be sure to keep checking the MYCHILDREN MYBRIDE MySpace, which currently features studio updates giving a sneak peak of Lost Boy, as well as all of the bands current and future tour dates.

For info on MYCHILDREN MY BRIDE be sure to visit: http://www.myspace.com/mcmb