Your Memorial heading into studio 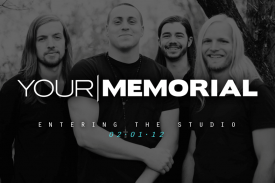 This February Your Memorial will be heading into Covenant Studios to record their follow up album to 2010’s Atonement. The band will work with engineer Josh Barber to put the album together, and then Josh Schroeder from Random Awesome will step in to do the mixing and mastering. The band expects to finish up the album in late spring for a summer 2012 release with Facedown Records. You’ll be able to follow the band’s process via video updates.

From the band:
It’s time for a new Your Memorial record. We’ve been in the writing process on and off since early 2011 and right now we’re working on wrapping up our third album, and sorting out all of the ideas for pre production. We’re working with our friend Josh Barber, who also was the main engineer on our last record ‘Atonement’, at Covenant Studios in our home away from home Kansas City, MO. We are also really excited to be working with Josh Schroeder at Random Awesome Studio who will be mixing, mastering, and helping build soundscapes for the record. We’re excited about how the songs are shaping up and can’t wait to share them with everyone. We’ll also be posting video updates of the whole recording process so be on the look out for those in the coming weeks!