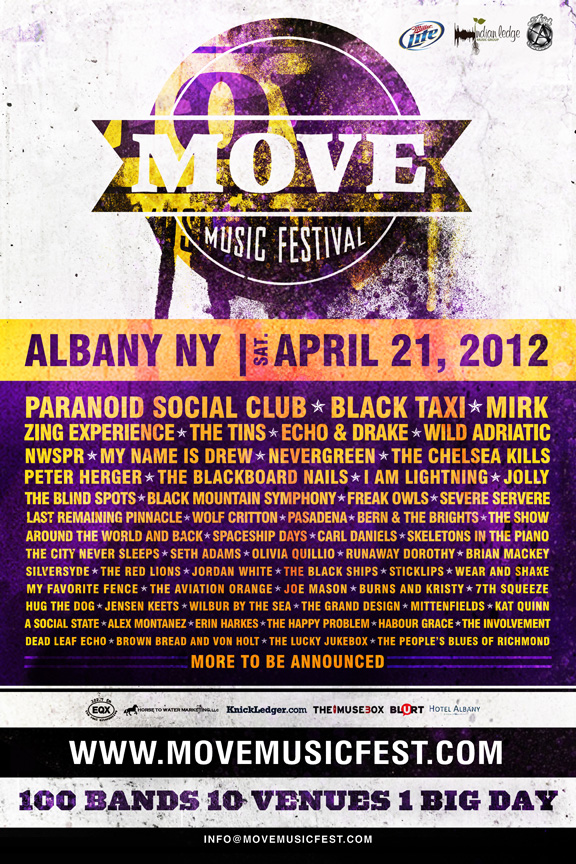 The MOVE Music Festival (http://www.movemusicfest.com ) , Albany’s inaugural indie music festival taking place on April 21, 2012 in Upstate New York, has released its final list of the 100 bands selected and confirmed to perform. The festival includes a tradeshow and exhibition which will be held at Hotel Albany with music performances taking place at 10 venues throughout downtown Albany.

Nadine Gelineau, the founder, CEO, and president of The MuseBox (http://www.musebox.net) , a renowned New York City-based marketing and public relations agency for developing music artists worldwide, has been named keynote speaker for the festival’s trade show exhibition at the Hotel Albany lodging and convention complex.

This event is designed to garner exposure for the incredibly talented yet undiscovered bands in the Northeast, as well as provide them with education and industry-know-how from some of the most respected individuals in the indie music world.  The tradeshow exhibition will present roundtable discussions attended by representatives from Pledge Music, Reverbnation, Planetary, The MuseBox, Rockethub, Pirate!, and EKG Booking.

The festival is presented by Miller Lite <http://www.millerlite.com> , produced by Indian Ledge Music (ILMG) and the Avid Agencies, and sponsored by The MuseBox, WEQX, the Knickerbocker Ledger, BLURT Magazine, Pearl Street Entertainment and Hotel Albany.