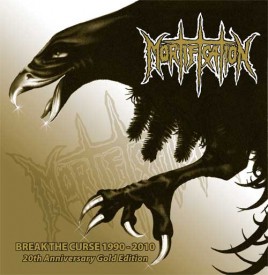 1990 was a year that would forever change and have an impact on the Christian Metal scene. The world would see releases from some of the most seminal artists in the scene…

Vengeance Rising – Once Dead; Deliverance – Weapons of our Warfare; Believer – Sanity Obscure and Tourniquet – Stop the Bleeding just to name a few!

This would be the world’s first introduction of the band that would go on to pave the way for Christian Death Metal bands to come! Touring the world over, releasing multiple albums and DVD’s, playing in front of thousands of raging metal fans across the globe! Bold and unashamed they would play anywhere and everywhere that would host them! Never afraid to speak their mind and let the world know their convictions!

Break the Curse was the initial release that would start it all, this release has long been out of print and a much sought after collectible for the Mortification fan!  In celebration of the 20 year anniversary of this release Roxx Records is set to release a strictly Limited Edition 2 Disc Gold Letter Edition of ‘Break the Curse’.

Disc one is set to include the full remastered release of Break the Curse as well as 8 Bonus tracks!! The bonus tracks will consist of another much sought after Mortification release…  “Noah Sat Down and Listened to the Mortification Live E.P. While Having A Coffee”. That’s right! For the first time since its release, the much sought after EP will be made available for the first time and with this limited quantity of only 1000. If that’s not enough for you 2 more specially added bonus tracks will be included here that have not been made available since their original release… For the first time ever on a Mortification disc the studio version of Time Crusaders! Also the long out of print ‘Eyes of Destruction’ originally recorded by Lightforce and that is only Disc 1!!!!

Disc 2 will be a very special DVD release of a show that has never been released in its entirety! Not just any show, this is the VERY FIRST Mortification live show ever captured live in Melbourne Australia at the Harvest Centre! Recorded June 15th of 1990 and completely remastered and restored this concert DVD is sure to become a true collectible for the Mortification fan!

WAIT, that still is not enough for you??!! What if we had a special ‘Ultimate Die Hard Mort Fan Edition’ with a very Special Limited Edition 20th year anniversary ‘Break The Curse’ T- Shirt!!!

2010 is set to be the year for Mortification fans! Visit www.roxxproductions.com for details and to get in on the pre-order!!!