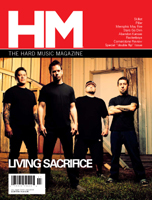 “You can hear LIVING SACRIFICE’s legacy in the entire generation of bands who’ve come after them… And those bands still haven’t caught up.”
– Tim Lambesis, AS I LAY DYING

“You would be hard pressed to find bands who started during the time LIVING SACRIFICE did that are still around making albums at all, let alone timeless and relevant metal.”
– Dave Peters, THROWDOWN

“LIVING SACRIFICE have always displayed a greater level of skill, songwriting ability and professionalism. They are one of those bands that you can count on to continually release amazing material.”
– Ryan Clark, DEMON HUNTER

After an eight-year absence, LIVING SACRIFICE – the legendary group who have been helping to define metal music in both the Christian and secular worlds since their inception 20 years ago – are back, as loud and vital as ever, with The Infinite Order, released on longtime label SolidState Records on January 26, 2010.
The band’s seventh full-length overall, and first since 2002’s acclaimed Conceived In Fire, The Infinite Order finds the band returning to its thrash roots for an unapologetic reminder as to exactly why so many of today’s heavy music leaders hold LIVING SACRIFICE and their legacy in such high esteem.  “The music is fast, heavy and thrashy,” singer and guitarist Bruce Fitzhugh said of the new album in an October  interview with AOL Noisecreep. “We love metal and playing heavy music. We didn’t wimp out at all.”

Produced by Jeremiah Scott (DESTROY DESTROY DESTROY) and mixed by Andy Sneap (MEGADETH, MACHINE HEAD, AS I LAY DYING), The Infinite Order finds LIVING SACRIFICE once again pushing the envelope of the metal genre, incorporating new dynamics and thrashier / more aggressive elements into a formula sure to appeal to fans of Conceived in Fire and The Hammering Process in particular, as well as the legions of younger fans who have grown up without LIVING SACRIFICE‘s direct influence, but rather the influence of the bands who have looked up to them – a long list that includes most of the biggest names in underground metal.   Starting today, Fitzhugh, fellow original member Lance Garvin and longtime bandmates Arthur Green and Rocky Gray (also of EVANESCENCE/WE ARE THE FALLEN) will let fans in on the excitement with an in-studio video blog, the first in a series of four, with a new video blog posted each week in November. LIVING SACRIFICE have also revealed plans for a video for lead single “Rules of Engagement,” and have announced the production of a live DVD, release date to come.