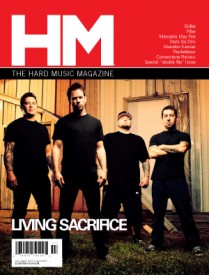 LIVING SACRIFICE FORTHCOMING ALBUM MOVED RELEASE DATE TO JAN. 26TH
First Album Since Reforming in 2008 “The Infinite Order”
As previously announced, Living Sacrifice are back with their brand new album, “The Infinite Order,”  their first release since reforming in 2008. The release has been moved from November 3 to January 26, 2010 on Solid State Records.  This will be the band’s seventh studio album.

Powerful, forthright, thrashy and skillfully executed as ever, the album serves as an unapologetic reminder as to exactly why so many of today’s heavy music leaders hold Living Sacrifice and in such high-esteem.

As I Lay Dying singer Tim Lambesis sums it up best, “You can hear Living Sacrifice’s legacy in the entire generation of bands who’ve come after them. And those bands still haven’t caught up.”

“The Infinite Order” was produced in Nashville, Tennessee and Little Rock, Arkansas by the band’s longtime friend Jeremiah Scott (The Showdown, Destroy Destroy Destroy). Mixing duties are once again being handled by Andy Sneap (Megadeth, Machine Head, As I Lay Dying), who mixed the band’s last album, 2003’s Conceived in Fire.

The band recently taped the music video for the first single “Rules of Engagement” in Los Angeles.   Stay tuned for an early 2010 tour to be announced shortly.

Living Sacrifice:
Living Sacrifice is one of the legendary Christian metal bands. Former and current members of the metal band went on to play in Evanescence, P.O.D. and Norma Jean. The forthcoming 2010 release, was produced by Jeremiah Scott (Destroy Destroy Destroy) and mixed by Andy Sneap (Megadeth, Machine Head) and announces the return of Living Sacrifice with might and majesty. Living Sacrifice’s storied career stretches back to 1989. Bruce Fitzhugh (vocals / guitar) and Lance Garvin (drums) remain from the band’s earliest lineup. Rocky Gray (guitar), also known as the drummer for We Are The Fallen and the former drummer for Evanescence, and Arthur Gray (bass) joined for 2000’s The Hammering Process.
http://www.myspace.com/livingsacrifice