LIVING SACRIFICE Lay Down The “Rules of Engagement” 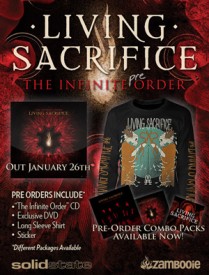 Metal legends LIVING SACRIFICE are giving fans their first taste of one of 2010’s most anticipated hard rock releases, The Infinite Order, out January 26 on SolidState Records.

The first single, “Rules of Engagement,” is available today for purchase on iTunes and for streaming on the band’s MySpace page, www.myspace.com/livingsacrifice.

“Rules of Engagement just came out as a really strong song musically,” says singer and guitarist Bruce Fitzhugh, who, with the rest of LIVING SACRIFICE, is celebrating 20 years of genre-defining metal. “It was one of the last songs that we wrote for the record and it came together really well. It was one that we wrote in pre-production. We all agreed that it would be the song that we wanted for the video.” The video will be making its debut shortly.

LIVING SACRIFICE has also opened the gates for album pre-orders, with several options available, including added value such as DVDs and t-shirts. Options can be viewed at:
http://www.zambooie.com/solidstate/Results.tpl?&st_id=112&category=Pre-Order&startat=1&directionsort=as&sortfield=title
The band’s seventh full-length overall, and first since 2002’s acclaimed Conceived In Fire, The Infinite Order finds the band returning to its thrash roots for an unapologetic reminder as to exactly why so many of today’s heavy music leaders hold LIVING SACRIFICE and their legacy in such high esteem.

“You can hear LIVING SACRIFICE’s legacy in the entire generation of bands who’ve come after them… And those bands still haven’t caught up,” says Tim Lambesis of AS I LAY DYING.

Produced by Jeremiah Scott (DESTROY DESTROY DESTROY) and mixed by Andy Sneap (MEGADETH, MACHINE HEAD, AS I LAY DYING), The Infinite Order finds LIVING SACRIFICE once again pushing the envelope of the metal genre, incorporating new dynamics and thrashier / more aggressive elements into a formula sure to appeal to fans throughout the metal diaspora. “The music is fast, heavy and thrashy,” Fitzhugh said to AOL Noisecreep. “We love metal and playing heavy music. We didn’t wimp out at all.” Let the countdown begin.