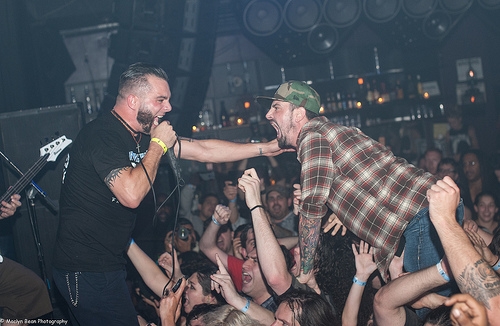 Killswitch Engage is back and better than ever (or at least as good as they used to be). During an intimate set at the Santos Party House in New York, Killswitch brought classics and new songs to an extremely receptive and completely packed house.

Former and reunited-with-the-band current singer Jesse Leach abandoned the operatic “pretty-core” stage moves that KSE has developed for that last 10 years in favor of crowd participation and a thrashier punk style set. Of course they played the singles that you’ve heard on Guitar Hero (“My Curse,” “End of Heartache,” etc.), but they weren’t the stars of the show they used to be. It was almost as if Leach had a little bit of disdain for the songs and might be tired of crowds requesting them. (“My Curse” was dedicated to “all the guys on their man periods.”)

But honestly, who could blame him? The band is sitting on an entire new album of gold just itching to get played on repeat and have kids learn the tracks for guitar solo YouTube videos. All in due time though.

Guitarist, Adam Dutkiewicz kept the vibe positive, told bad jokes and generally managed to outshine everyone else on stage in pure personality. It was hard not to spend the entire show just watching to see what he would do next.

As the crowd started to get more and more into the set, some well-understood rules of attending a show began to go out the window. People (see: old people) that still like to mosh, crowd surf and dive off stages started overstaying their welcome. One of the volunteer crowd members actually stayed on stage for over 30 seconds, singing into a microphone that wasn’t offered to him before security threw him off.

KSE gave somewhat of a teaser of their upcoming tour, where they will be playing Alive or Just Breathing in its entirety for the 10th anniversary of the album.