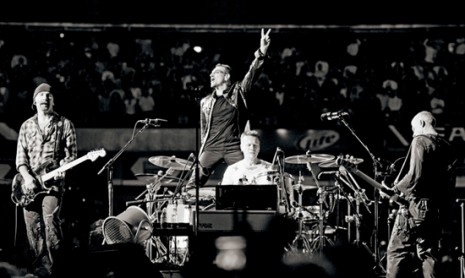 The opening band on this leg of the tour was MUSE, and they delivered an amazing set. Unlike the so-called common practice of “blue-mixing” the opening band with less-than-deserved volume levels, MUSE was shaking the place with its intense modern rock. 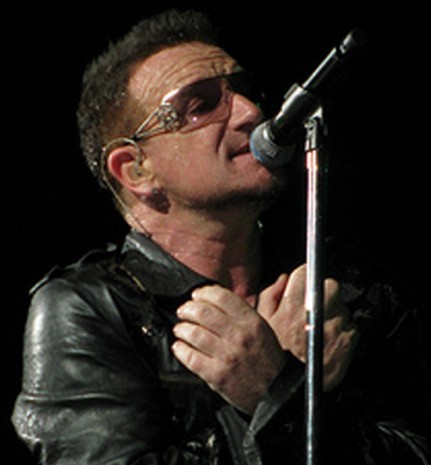 Drummer Larry Mullen strode onstage with a spotlight leading the way as the crowd erupted in cheers. He did a nice solo intro and then the band came on for “Breathe.” It was kind of a raw and primal way to start off an arena/stadium show, but it worked. The building percussive crescendo exploded with The Edge’s bombastic power chords. Along with several dozen thousands of fans, I was a foot off the ground in musical joy. “Get On Your Boots” kept the show moving along at a brisk pace as the band continued to explore their large musical playground. “Magnificent,” with its worshipful lyrics wrapped up the first segment of three brand new songs that started the show. Bono introduced the band to the crowd and declared like an astronaut on his spaceship stage, “Houston, we have no problem.” They romped through the groove-heavy and soulful “Mysterious Ways” that gave way to “Beautiful Day.” The audience sang all the words to “I Still Haven’t Found What I’m Looking For,” which seemed to close the deal that audience and band were one on this night. “Until The End Of The World” echoed back to the adventurous middle phase of U2’s career and then the video curtain started descending as the band went into the old title track from The Unforgettable Fire. The atmospheric sounds of this early collaboration between the band and producers Brian Eno and Daniel Lanois was another high point in a must-see show. The skipping and bouncing guitar notes rang out with trails of reverb as the hexagon-shaped video panels separated from one another until they almost reached the stage. This elliptical cylinder of a video screen spun red and multi-colored lights around and around to great effect. It was a nice touch that reinforced the song’s melodic and somber mood. 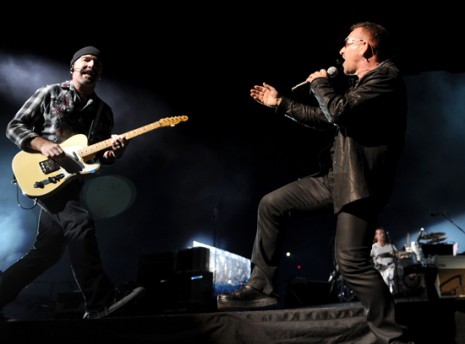 The lengthy set turned political with “Sunday Bloody Sunday,” which Bono introduced with a call out to those listening to their radios in Iran. After “One” the band segued into “Where The Streets Have No Name,” which has to be the greatest building crescendo in all of rock. The band said, “Good night,” but everyone knew that a few more songs lay ahead. They peaked out with another rarely performed tune, “Ultraviolet,” which the band seemed to tip its own hat to in “Get On Your Boots” with the melodic cries of “Baby, baby, baby.” U2 finished things off with a spiritual exclamation point, as they traditionally do at the end of a show. Previous tours used “40” or “Yahweh,” and this one was capped off with “Moment of Surrender.” Quite a memorable show that lived up to its hype and the anticipation of U2 fans everywhere. I think they failed to exceed the height of the musical bar they set with the Vertigo Tour a few years prior. Visually, they topped themselves, to be sure; and this one was no musical slouch. I just remember the afterglow of that tour lasting a few days longer than this one. Which is not a bad “problem” to have. I’d still give ‘em an “A.”