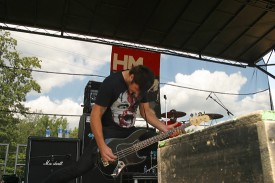 The follow-up to 2008’s buzz-inducing I Swear…, the new album is a career-defining exercise in dynamics and energy, combining squelchy, feral guitars cascading off of commanding screams and pleading melodies. It’s a dizzying give-and-take of brawny riffage and chiming, atmospheric guitar tapestries.

“With Bury Me Alive, we really sat down and tried to do something different and fresh for our fans,” explains guitarist and principle songwriter John LaRussa. “We feel like this is the album they wanted us to write also. There is a lot more energy in the songs, and we stepped it up a notch on heavy progressive side of things.”

After releasing two rapid-fire albums in just over two years, the members of INHALE EXHALE enjoyed a brief but well-earned respite in early 2009, during which babies were born and marriages were performed. But, following a few idyllic months off the road, the boys are keyed up for another round of revelry with their fans, centering around the release of Bury Me Alive. Tour plans to be announced soon.

Says LaRussa: “We are the most excited we’ve been since the creation of INHALE EXHALE. This is the first record that we all really sit and listen to and enjoy 100%, and most importantly, we really are all on the same mindset as a band and as friends, and we’re excited to hit the road to support this album.”

2. Did You Ever Have A Touch To Lose

5. A Dark Place For Your Mind To Be

9. Better Her Than Me

Past praise for INHALE EXHALE:

“[Frontman Ryland Raus] handles the guttural screams part as competently as anyone outside the Chariot. His melodic vocals are what make him a real MVP… [a] full on assault.” -ALTERNATIVE PRESS

“I Swear… finds Inhale Exhale still rolling out pure headbanging, gritty brutality; only this time, the band is at its creative best.” -ULTIMATE GUITAR