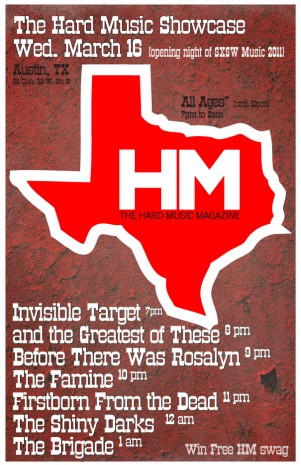 The show starts at 7pm with Austin’s own Invisible Target (at 7pm), followed by and the Greatest of These (8pm), followed by veterans from last year’s showcase Victory Records and Houston’s own Before There Was Rosalyn (9pm), The Famine is next at 10pm, followed by Firstborn from the Dead (11pm), a midnight show by Houston’s The Shiny Darks and Austin’s own The Brigade at 1am.

I’m told that at 10 pm that all minors will have to leave, which is a bummer, due to curfew laws in Austin’s entertainment district. NO SXSW WRISTBANDS/BADGES/ATTITUDES needed!