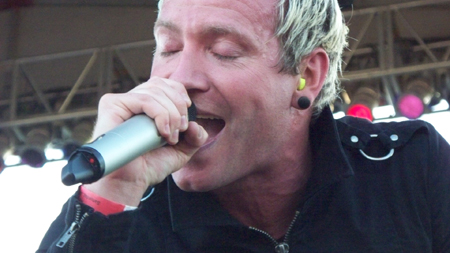 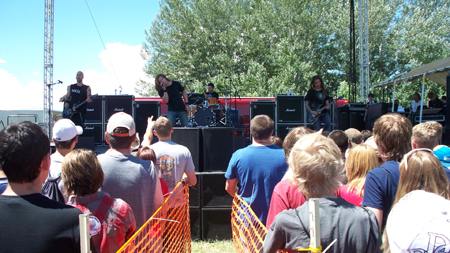 the corridors of power...

July 31, 2010. While the rest of the country drooled over every detail of Chelsea Clinton’s wedding, an estimated 35,000 people migrated to Longmont, Colorado the new site of the 3rd annual Heaven Fest. 70 artists filled 7 stages on 300 acres making Heaven Fest bigger and badder than years before. Kutless, Casting Crowns, Mary Mary, and a Petra reunion all graced the main stage, while harder bands like Maylene and the Sons of Disaster, Sleeping Giant, The Devil Wears Prada and White Collar Side Show rocked on the debut of the hardcore/metal stage. But like last year, my time was exclusively devoted to the rock stage. 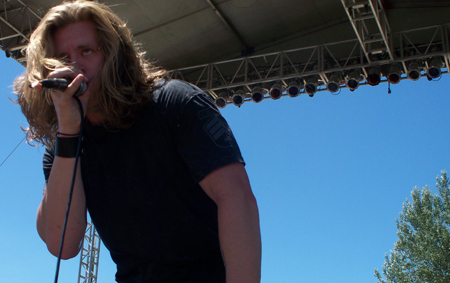 This year’s rock stage kicked off with Decyfer Down. From the very first song I was reminded of the excellence in sound quality that comes with Heaven Fest. Unlike pretty much every other concert I’ve been to where the guitars tend to drown out, well, everything, at Heaven Fest the vocals were so clear one could very easily follow along, assuming they knew the words, of course. Decyfer Down definitely didn’t waste time rocking the stage, starting their 45 minute set fast and hard for the first three or four songs. Then they slowed things down a bit in what singer T. J. Harris described as an “altar call” with an explanation of their song “Best I Can” informing the crowd that they didn’t have to feel the need to be perfect. They then finished up with fan favorites “Fight Like This” and “Ride With Me”.

Next up was the rock/worship group, The Kry. Coming all the way from Quebec City in Canada, they would be the first of three Canadian bands performing on the rock stage. They opened up with the song “Everywhere” and a shout out to Canada. One thing especially notable about the set was that this was the first time in 10 years that all three original band members Pete Nelson, Yves Lajoie and Jean-Luc Lajoie had played a show together. The performance mostly consisted of songs that leaned toward the praise and worship side of the rock spectrum with songs like “Something About You” and asking the crowd to sing “Believe in God”. They fittingly ended with the reading of Bible passage 1 Corinthians 15.

Filling the 2:30 to 3:30 slot was last year’s main event at the rock stage- Disciple. They played several songs from their upcoming album Horseshoes and Handgrenades as well as other fan favorites like “321” and “The Wait is Over”. Unfortunately, I missed most of Disciple’s set due to being hassled by event security staff. Which brings me to my next point; if you do decide to make the trip to Heaven Fest next year, do not waste your money on premium passes. You’re basically paying 50+ extra bucks for a sparkly wristband that doesn’t get you to the front of the rock stage like I was told it would. Disciple, however, would remain unfazed and continue to rock the crowd to the point of earning the day’s first encore. Singer Kevin Young would once again take the mic to talk to the crowd about not always asking God to give them things, but instead to give back and be a blessing to others. He then urged the crowd to go visit Compassion International’s table in the main tent and to consider making a difference in an impoverished child’s life. 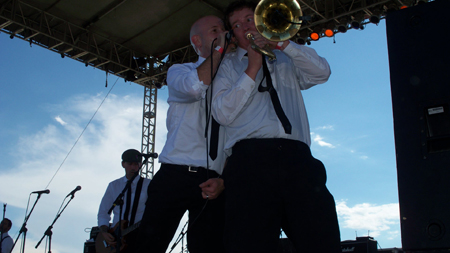 The midpoint of Heaven Fest came at 4 o’clock and with that brought the first ever signed Christian ska band the O.C. Supertones. It has been several years since the Supertones played a show in Denver and for people like myself who had yet to see them live, it was well worth the wait! They walked onto the stage to Peaches and Herb’s “Reunited” and began their one hour set with a song that was older than half the kids in the crowd “Adonai”.

OC Supertones fans having a go

The energy on stage was consistently high throughout the performance as the self-proclaimed “old guys” were constantly jumping around and off the stage and that energy was clearly mirrored by the crowd. They played a massive 12 song set from their first four albums including “Supertones Strike Back”, “Grounded”, “This is What it Comes to” among others. They then took it down a notch with “Away From You” off of their 3rd album, Chase the Sun. After that, they had a line-up switch as the crowd was led by drummer Jason Carson donning an acoustic guitar in a worship song while Tony hopped on drums and Matt covered bass. The set was supposed to end with “Little Man” and “Who Can Be Against Me?” but the crowd would not let them leave the stage so easily. After several shouts of “encore”, they came back with “Unite”.  The Supertones’ set was filled with great music and all kinds of craziness. Between all of the jumping on and off of the stage, several mic tosses into the crowd and Darren wanting Matt to jump off of his back, the Supertones definitely had the best all around performance of the day.

Barlow Girl had the stage between 5:30 and 6:30 but after a breakfast of water and a lunch of more water, I needed to go get some food because there was no way on earth I was going to miss the next band. Sorry Barlow Girl! 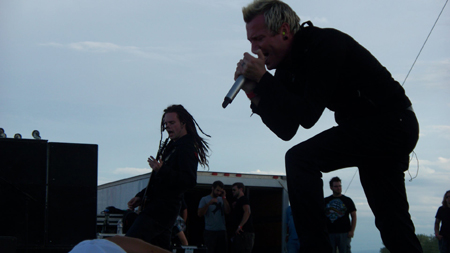 Now I will start this section off with a disclaimer: I am EXTREMELY biased. Thousand Foot Krutch is one of my three favorite bands, so anytime they take the stage I’m going to love it! These Canadian rockers walked onto the stage to “The Invitation”, the opening track on their newest album Welcome to the Masquerade. One of the first things I noticed was there had been a change in the lineup since I last saw TFK. Long time touring guitarist Nick Baumhardt had been replaced by new guy Ty Dietzler but that did not affect the performance one iota. With extremely intense facial expressions and dreads flying every which way, Ty actually enhanced the viewing experience. TFK got the party started with title track “Welcome to the Masquerade” followed by “Bring Me to Life”, “E for Extinction” and “Scream”. I almost died of shock during “Bring Me to Life” when a photographer from a local magazine asked me who was playing.  I looked at him and said “Are you serious? It’s only one best bands ever!” as I pointed to my shirt. Probably not the best response I could’ve given but I’m still astonished that some people don’t know TFK. It’s just wrong.  Anyway, concert staples “Move”, “The Flame in All of Us”, “Falls Apart” and “Rawkfist” all made an appearance. And after 45 short minutes of awesomeness, they finished off with “Fire It Up” and “Puppet”.

As the sun set, the lights turned on and that can only mean the headliner for the 2010 Heaven Fest rock stage would soon appear. Canada’s third and final group Hawk Nelson hit the stage running with “Friend Like That” off of the similarly named album Hawk Nelson is My Friend. After playing “You Have What I Need”, “The Job” and “Things We Go Through”, they began to talk about every Canadian’s favorite sport (or so I’m told) hockey. Which led to a ukulele solo that I did not recognize but the rest of the crowd did as they all sang along. “Bring ‘Em Out” got the crowd jumping again but that was short lived as Jason Dunn gave a message about Christians who are on the fence and referenced something that he had recently seen that stated “What if God only thought about you on Sundays?” and transitioned into the song “Try to Be”. “California”, “Let’s Dance” and “Live Life Loud” finished off the evening to the screams of the hundreds of adoring fans. 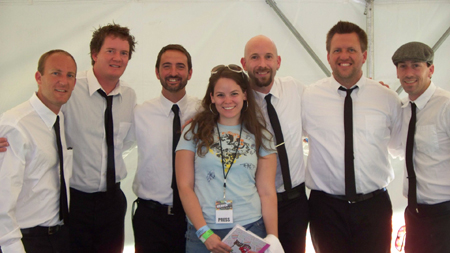