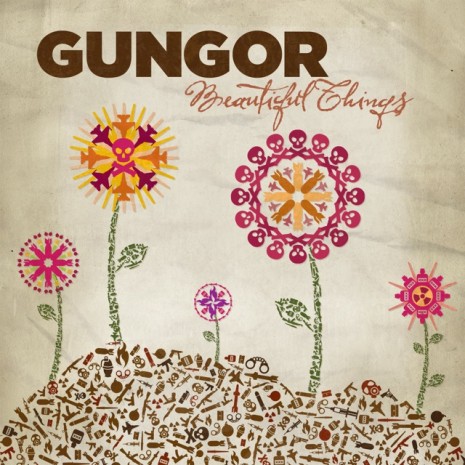 Gungor, alongside Brash Music, will release Beautiful Things, a collection of songs birthed out of an honest journey of faith on February 16, 2010.

“This album is an expression of hope that God will make beautiful things out of the dust in our lives,” explains band front man Michael Gungor. “That God will somehow use us, use our obedience and love, our feeble human effort, and build Himself a kingdom.”

Formerly known as The Michael Gungor Band, the socially active, Denver-based foursome is comprised of Michael Gungor, his wife Lisa, as well as friends Brad Waller (guitar) and Josh Harvey (bass). Gungor hits the scene with a different perspective than most bands as the lead singer is perhaps best known for co-writing distinguished songs like “Friend of God” and “Say So” made famous by Israel Houghton.

The music is not the only impressive thing about Gungor, as likewise the band is also incredibly involved in missions both in their hometown and abroad. Michael and his wife moved to Denver and eventually founded a community of believers called Bloom. The connection between worship and social justice became concrete in Denver with regular involvement with the homeless & needy of that area, and the outcome is evident on Beautiful Things. The group of four also headed to Africa in late September to further their involvement with the Mocha Club, an online community of people funding relief and development projects in Africa including clean water, education, women at risk, orphan care, children, HIV/AIDS and healthcare.

Ironically, most of the music is not directly about caring for the poor and ministering to widows and orphans. Instead, much of the album addresses the spiritual journey and the understanding of God that happens when we do these acts. The self-produced album’s credits, which reflect a loose and varying lineup, include Gungor’s wife Lisa on glockenspiel along with bandmates on horns, strings, banjos, a melodica, “foot-stomping mayhem” and Gungor’s now-signature toy piano.

Filled with unique instrumentation, the album features original songs such as “The Earth is Yours,” “Dry Bones” and “Call Me Out.” Israel Houghton even guests on a bass-driven romp called “Heaven.”