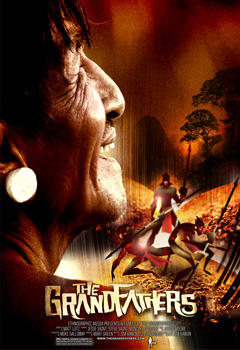 Churches and ministries hoping to better serve students and young adults are now incorporating documentary films into their efforts. These films, however, do much more than entertain and educate—they also inspire action. New films by EthnoGraphic Media (EGM), an educational non-profit based in Oklahoma City, have been created to address a desire among young people to come together around important issues, engage in meaningful dialog with others, and become positive forces in the world.

Student screenings of EGM films this year include The Grandfathers, as part of the Youth 2011 conferences which are the national youth conferences of the United Methodist Church as well as the opening night of the Cornerstone Music & Arts Festival in Bushnell, Illinois.

The Grandfathers, a motion-graphics film about a young man’s struggle with his complicated heritage, completes a trilogy produced by EGM that includes End of the Spear and Beyond the Gates of Splendor. The film is receiving tremendous exposure and empowering a large segment of students. Screenings are being held nationwide this summer, impacting youth with themes of reconciliation and heritage. Screenings of the film this year include the Youth 2011 conferences which are the national youth conferences of the United Methodist Church. The Grandfathers was recently awarded Best Documentary from the National Broadcasters Convention, it will be screened as part of the UMC program in both West Lafayette, IN and Sacramento, CA., as the opening night late night event for all attendees.

These first two films, also from award-winning director Jim Hanon and producer Mart Green, tell the unforgettable and inspiring story of the killing of five missionaries by a stone-age tribe deep in the Amazon jungle. The impact of this tragic event lives on today in families of these slain men as well as among those responsible for their deaths.

Steve Saint consulted with Hanon and Green to help bring the story of his father, Nate, to screen through the feature film End of the Spear and the companion documentary film Beyond the Gates of Splendor. These films trace events leading up to and including the deaths of these men. More than that, they show the impact these events played on the lives of both their survivors and their killers. When the widows and their children went to live among the Waodani—a tribe regarded as the most violent on earth—they became an integral part of an incredible redemptive journey.

The Grandfathers showcases both the burden and benefit of the Saint family’s legacy. Jesse Saint, Steve’s oldest son and Nate’s grandson, was not raised among the tribe like his father. He struggles to find his place under the weight of the memory of a famous grandfather he never knew and a heroic father he does not fully understand. This will all change after Jesse travels to the jungles of Ecuador with his family and gradually forms a special bond with Mincaye, one of the tribesmen who took part in his grandfather’s murder. Only then will he confront his family’s past and come to terms with his own destiny. And there he will find his place in this story.

The Grandfathers has been awarded The Dove Foundation seal of approval.

EthnoGraphic Media (EGM) is an educational non-profit (501c3) organization that explores critical issues of our time. As a community of artists and filmmakers, EGM uses media to tell true stories of hope and compassion in the midst of suffering and strife. EGM believes that gaining a deeper understanding of the human condition inspires positive action. Projects include Little Town of Bethlehem, The Grandfathers, Miss HIV and Beyond the Gates of Splendor.