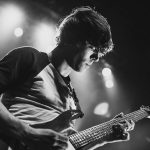 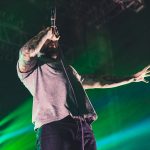 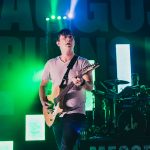 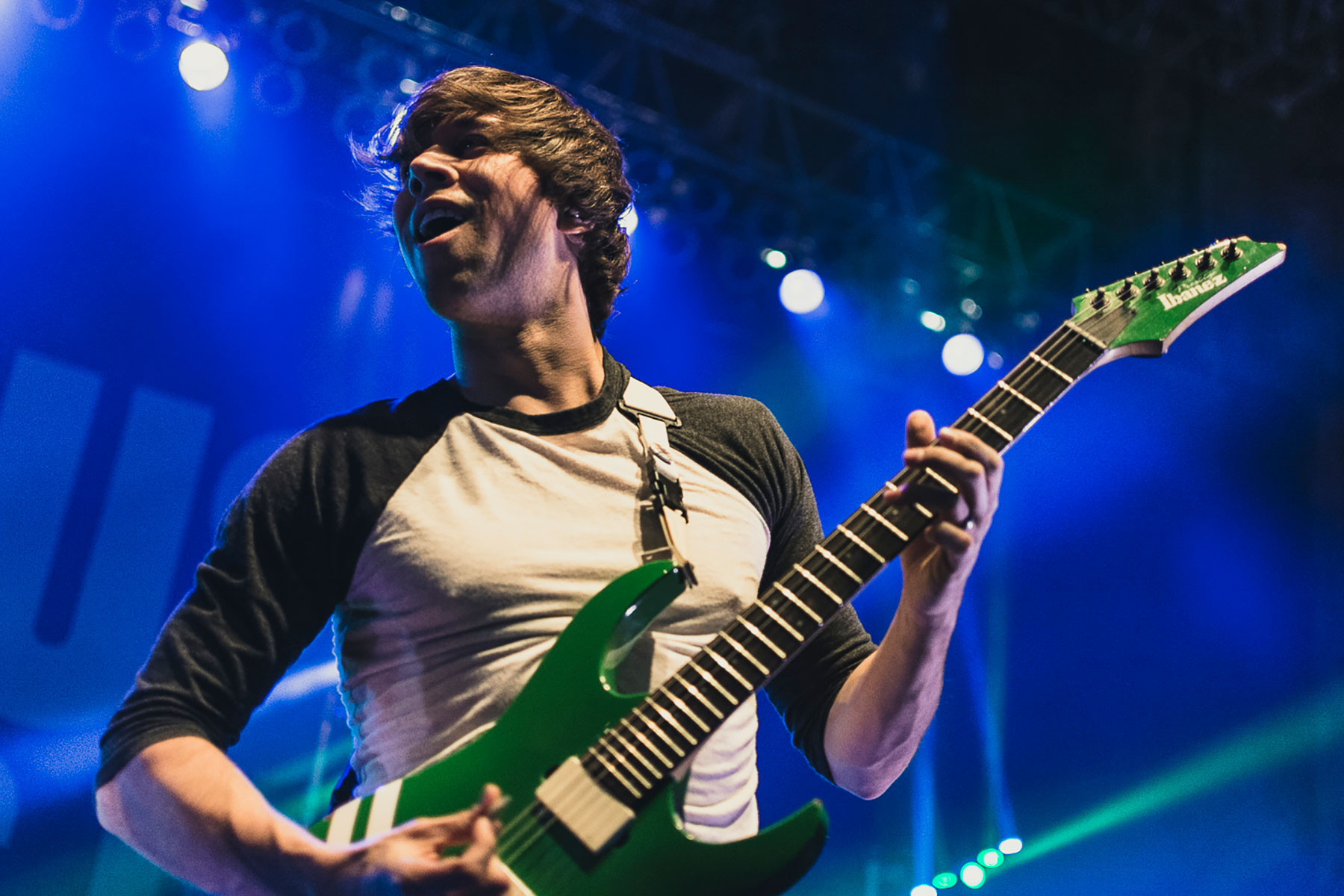 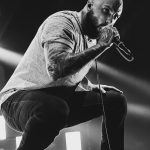 I found out about the Messengers Ten-Year Anniversary Tour by chance from a friend of a friend. I looked at the lineup, ecstatic to see two other bands that I loved with cheap tickets to boot. It would be my first exposure to the New York hardcore scene, and despite the short notice, I resolved to go. The show was going down in a theatre next to my grandfather’s own old haunt, the Majestic, where he sang as Buquet in The Phantom of the Opera. Though, that was a different time and a different brand of belting.

Ten years. It’s been ten years since August Burns Red released Messengers. At the time, the group had just experienced rebirth. With two key members recently swapped out, the band — whose then-new lineup still stands to this day — wrote their first album together, taking it with them down that long touring road. Along the way, they laid down the foundations of an ongoing musical legacy that’s still bearing the torch for a community of happy people who like angry music. I was 13-years-old then, and though I hadn’t yet begun my days of head banging and hair growth, there was already world of dissonance writhing all around me.

Josh Scogin has been around awhile himself. Three years since leaving The Chariot, he teamed up with drummer Michael McClellan to begin something new. ’68 has since become a hybrid heavy-metal-stage-theatric. When Scogin wasn’t seeing how many times he could throw his guitar or spit over McClellan’s head, he’s creating six-stringed, feedback-laden mayhem, shouting raw and personal lyrics that invoke the ghosts of Nirvana.

“We are Brittney Spears,” Scogin announced to the crowd between songs, their show reminiscent of the pop star’s ’07 meltdown, “halfway through the shave.” He chuckled to himself.

They ended their set with an extended edition of “Track 01.” Halfway through the madness, the duo appeared to finally crack under the pressure of their own music. The guitar abruptly cut out, drums slowing to a halt like a derailed train. They hung together there between a musical crossroads of silence and confusion that seemed to stop the entire show — but it’s all part of the act. Scogin and McClellan knew exactly what they were doing and exactly where their cue was. The music resumed, whatever anxieties stirred by the abrupt quiet melting away in the force of McClellan’s incessantly pounding drums and Scogin’s ongoing conversation between his screams and own guitar. Their performance onstage felt like an exercise in existential crisis.

Those unfamiliar or uninterested with Scogin’s onstage antics may not enjoy the band, which pains me considering the potential of the project. Admittedly, their performance may come off as a schtick after extended exposure to their angst and tomfoolery. Displays of unhindered emotion have their place, but when it comes at a sacrifice to the performance of the music itself it can take away from a live show. “Thanks for looking at us,” Scogin offered in departure. With a second album on the way, time will tell whether the third time’s the charm or if three’s a crowd for Scogin’s brainchild. I hope they find a way to bring out the story they’re trying to tell, because they have chaos down to a science.

In Heart’s Wake had their own ten-year anniversary to celebrate.  The band formed in 2006 and has toured with genre giants like Parkway Drive and Chelsea Grin. This show was my first exposure to the band.

Jake Taylor channels positivity into his philosophy as a front man, interacting frequently with the crowd, at one point leading them in a chant of, “No hate, no fear.” He remarked half way through the set what a milestone the night was for the band. Like so many of us wannabe high school metalcore musicians, I could say the band and I shared similar experiences covering August Burns Red in a high school band’s basement.

In true Aussie fashion, Taylor dove onto the crowd riding an inflatable crocodile.  The music was heavy, fun, and carried an important message of togetherness that often seems goes unacknowledged at these gigs. The only complaint was the song composition felt constrained by strict adherence to genre norms. Despite the stereotypes, the band’s technical prowess was clean and clear, and, compared to ’68, a more tempered approach to working the crowd.

The Brief But Unstoppable Force

The veterans in Protest the Hero haven’t slowed down in 15 years despite their demanding style of shred. The band’s trademark endless sweeping guitar riffs, sustained howling vocals, and rocket speed rhythm section pulled no punches. They gave the crowd a taste of their most recent album, Pacific Myth. Rody Walker called attention to the song “Tidal,” remarking on a grammatical error in the song’s lyrics concerning the line “Begging the question: Why?” But then again, when your songs explore the ridiculous subject matter of Ghengis Khan, space ships, and train suicide, what’s one missed English lesson?

He continued on, “I still don’t fully understand it. I’m stupid, but my wife’s smart. ‘Don’t worry, nobody will notice,’ she told me.” Sure enough, “What was the first Facebook comment concerning the song about?” Walker asked us. Somebody remarking on that very error. “Learn from your mistakes,” he finally said. Protest’s air of humor and humility, like their musical talent, hasn’t faltered over the years. They make fun of themselves, advertising for the office supply store Staples “by contract” and poked fun at their Canadian heritage by swearing in french.

Luke Hoskin and Tim Millar are as surgical as ever. Arif Mirabdolbaghi and Mike Ieradi provide a rhythmic base in hyperdrive to the often dueling guitarists. I was glad to hear classics from Fortress keeping in tune with the tour’s nostalgic theme, but I would have liked to hear more from Pacific Rift and some personal favorites from Scurrilous.

In typical Protest fashion, their set ended super early, leaving me hungry for more music having only given the audience a sample of their discography in the course of a little more than a half hour. I guess I can’t blame them. When you shred on the level of musicality this band does, there’s a tendency to burn bright and fast.

After a short interlude between sets (in which the audience collectively sang along to System of a Down’s “Chop Suey”), it was finally time for August Burns Red to play. The band was all business, introducing themselves by immediately jumping into “Truth of a Liar.” (As it is the tenth anniversary of the album, the band has been performing the full album There was no pause between songs, Jake Luhrs breaking the fourth wall only to encourage circle pits or to quiet the audience before a particularly heavy breakdown in “Back Burner.” That isn’t to say the front man isn’t without theatrics. Between his broad roars, he’d pound his chest to the drums or present himself as a cross to the crowd. Not to mention, Jake Luhrs’ mic swinging skills would give Taking Back Sunday’s Adam Lazzara a run for his money.

Guitarists JB Brubaker, Brett Rambler, and bassist Dustin Davidson never let up, never showing any indication of fatigue despite the speed and length of a set that extended well past the entirety of the advertised album. Matt Greiner was an animal behind the throne, driving the entire set with seamless fills that pumped lifeblood into their entire musical organism.

After ABR’s performance, Greiner joined Mike Iedari of Protest the Hero in a drum duel before the band’s encore, inevitably claiming victory in part to the lack of microphones on Iedari’s set. Despite playing Messengers front to back, the band and the crowd were ready for more, continuing to play pieces from Leveler and Constellations before disappearing backstage.

As time passes and I continue to follow music, I’m constantly reminded of how old I am getting. As I write this, I think to myself, “What about another ten years? What about 20? What’s the next generation of headbangers going to look and sound like?” Whether you’re looking to relive your glory days or are new to the scene and just now attuning yourself to the finer points of dissonance, this tour was the place the be. The lineup is experienced, prolific, and — most of all — very metal.