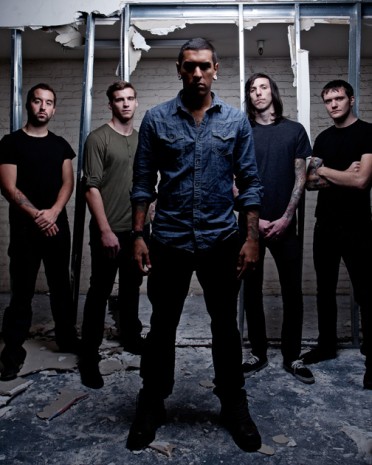 New Album “Immortal” Set For Release On May 22nd

For Today’s new single “Fearless” off their upcoming studio album, Immortal, is available at iTunes today.  “Fearless” is currently in the Top 5 on the iTunes Rock Chart.  Immortal (Razor & Tie) is set for release on May 22nd and features 11 new tracks produced by Will Putney (Lamb Of God, Suicide Silence).  Putney previously worked on For Today’s Breaker, the band’s 2010 release.

For Today will hit the road on a nationwide headlining “Fight The Silence Tour” presented by HK Army and Substream Magazine.  The tour kicks off March 9th in Nashville, TN and will make stops throughout the country including the Never Say Never Fest and New England Metal & Hardcore Festival before concluding on April 22nd (tour dates below).  For Today will also play at SXSW at the Pantheon Agency Showcase.  The tour features additional support from A Skylit Drive, Stick To Your Guns, MyChildren MyBride and Make Me Famous.  For Today is also confirmed for the entire run of the 2012 Van’s Warped Tour.

Preorder bundles are available today at ForTodayBand.com in 10 different configurations offering a variety of different items.  All preorder bundles include a poster, digital download of Immortal and an instant download of “Fearless.”  The bundles offer a series of different band merch options including t-shirts, hoodies, as well as a limited edition watch.  Immortal will also be released on vinyl, which is available in several of the preorder packages.  The first 250 vinyl orders will receive the album on a limited color grey marble color, while all later purchases will be a standard white copy.

For Today is a Christian metalcore band that will release their fourth full-length album and first for Razor & Tie this Spring 2012. They are currently working with producer Will Putney (Lamb Of God, Suicide Silence) previously worked on For Today’s Breaker, their 2010 release.  The band recently confirmed the Van’s Warped tour for this summer and are kicking off 2012 with the nationwide headlining “Fight The Silence Tour” presented by HK Army and Substream Magazine this March hitting the Never Say Never Fest, SXSW and New England Metal & Hardcore.  For Today is currently on the cover of Substream Magazine’s March issue- view HERE.    For Today formed in 2005 and has since released one EP and three full-length albums.  The hardcore-influenced metal band is known for their non-stop touring, high energy live performance, and unrelenting message.  Having played over 1000 shows in five continents, For Today has toured with Emmure, We Came As Romans, Winds of Plague, The Devil Wears Prada.  The band headlined the Scream The Prayer Tour 2010 with Maylene and The Sons of Disaster and also was on the Motel 6 Rock Yourself to Sleep Tour with We Came As Romans this past year.  To date, For Today has sold over 70,000 albums in North America.  As forthcoming about their faith as they are about their musical prowess, For Today have become widely known as one of modern metal’s most technically proficient bands.  For Today is Mattie Montgomery (lead vocals), Ryan Leitru (lead guitar, vocals),   Brandon Leitru (bass), Michael Reynolds (rhythm guitar), and David Morrison  (drums, percussion).