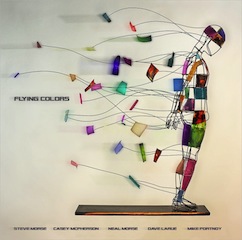 FOR DEBUT FROM FLYING COLORS

Mascot Label Group has announced a March 27 release date for the debut from Flying Colors (available the day prior overseas) on their Music Theories Label. The formation of the ensemble began with a simple idea: virtuoso musicians and a pop singer joining together to make new-fashioned music the old fashioned way.  Refreshing, classic, old and new, the recordings are saturated with the many styles, tones and hues of the players who in becoming a band have delivered a unique fusion of vintage craftsmanship and contemporary music.  Flying Colors is Mike Portnoy (drums, vocals), Dave LaRue (bass), Neal Morse (keyboards, vocals), Casey McPherson (lead vocals), and Steve Morse (guitar).  Portnoy shares, “This album has bits and pieces of what you’d expect from each of us. However, the sum of all its parts led to brand new, unchartered territory for all involved.”

In 2008, executive producer Bill Evans brought the idea to the world renowned musicians and producer Peter Collins. Intrigued by the idea, and the prospect of working together, the four signed on to form a band and record a first album.  Steve Morse and Dave LaRue have developed a magical music chemistry over the years, that began early in their careers as partners in Dixie Dregs.  Morse subsequently became a member of Deep Purple in 1995, while LaRue’s ongoing musical adventures include Joe Satriani, John Petrucci, Jordan Rudess, Steve Vai, and the aforementioned Portnoy.  Multi-instrumentalist, composer and singer Neal Morse is one of the leading figures in progressive rock, who’s significant notoriety follows his co-founding of the seminal band, Spock’s Beard in 1995, recordings as a solo artist, and contributions to the super-group Transatlantic.  Mike Portnoy is one of the most popular and respected drummers in both metal and rock, and an accomplished writer and producer.  He is the recipient of numerous industry accolades, including 26 Modern Drummer awards, Revolver Magazine’s Golden God award for “Best Drummer” and Drum Magazine‘s “Drummer of the Year”.  He rose to prominence as the leader, drummer, producer, and co-writer for metal/prog juggernaut Dream Theater, before moving on in 2010. That same year, he worked on Avenged Sevenfold’s #1 album Nightmare and their subsequent tour.  And, it was Portnoy who recommended Alpha Rev’s emotive singer Casey McPherson as a contender to join Flying Colors.

McPherson, who’s 2010 Hollywood/Disney album New Morning debuted in the Top-5 on two Billboard charts, enjoyed major success at radio with multiple hits.  The track “New Morning” spent 17 weeks in the Top-10 on Triple A Radio, and enjoyed a run on Vh1’s Top-20 Countdown for months. Steve Morse offers, “Casey was a glorious find, because he could make anything sound fantastic, and is a multitalented like the others.”

Flying Colors convened for just nine days in early 2011, and composed and recorded this album during a short and intense session.  Dave LaRue recalls, “It was quite an experience – the band moved at a fast pace, ideas flying around the room at all times. Sections of tunes were arranged, then re-arranged, ideas were tried every which way until we made them work, or, in some cases, discarded them altogether. Just keeping track of everything was a challenge!”  McPherson adds, “This record is filled with trial and triumph. Raw and delicate songs alike amidst the swirling and daring orchestration of Steve, Neal, Mike and Dave. It’s been such an inspiring challenge melding folk, prog, pop, and metal all into one big recording.”

Touring plans for Flying Colors will be announced in the coming months.