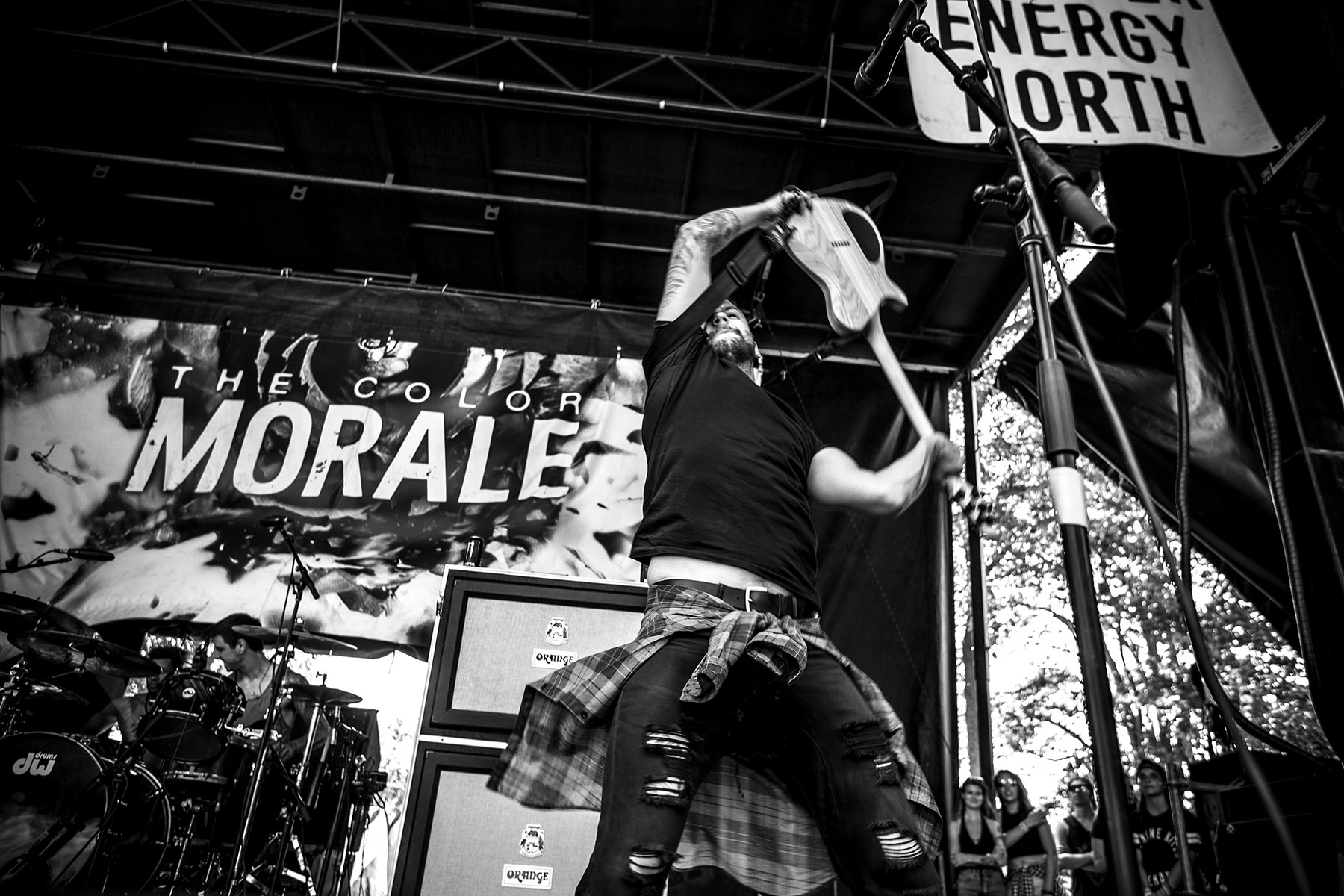 As the sun sets on Summer 2016, Vans Warped Tour puts an end to year 22 and looks forward to year 23. This milestone got us thinking: What does legacy mean to these bands?

The Vans Warped Tour turned 22 this year, and the milestone got us thinking: What does legacy mean to the bands? We set out to ask the questions that made us and our subjects feel a little uncomfortable, but, in the end, the challenge brought out the best in conversation. We chose four bands to explore these heady topics and find out from them what truly lasts — and what it takes to overcome their obstacles and make it this far. 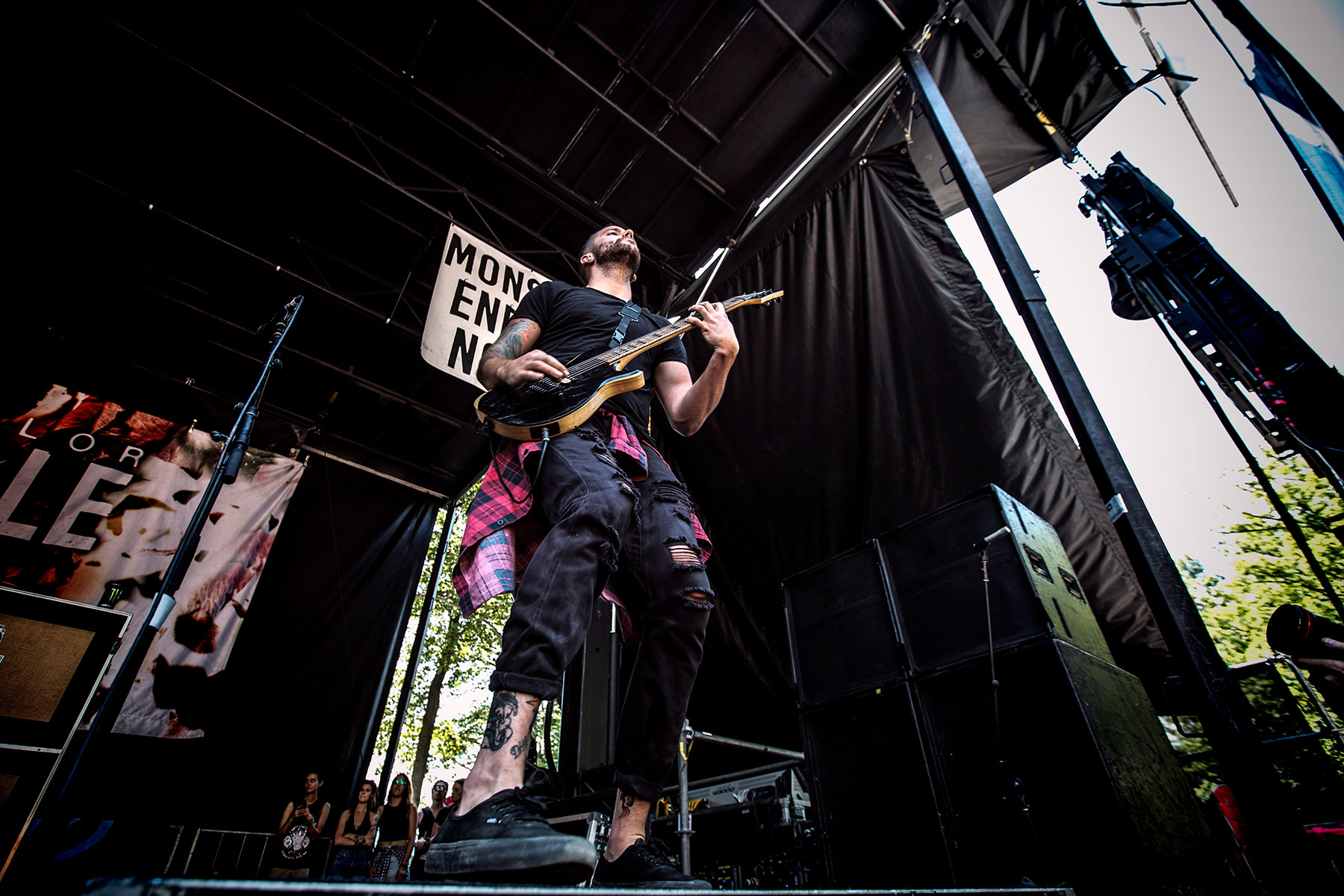 I feel like, for us, our legacy would be that our band is about a sense of community and building people up. It’s letting people know that whatever you’re struggling with, you’re not alone. At the end of the day, we’re just normal dudes. Garrett (Rapp, vocalist) lives on a horse ranch in the middle of nowhere. I’m from a town of less than 10,000 people in Wisconsin. We should not be here doing this. We just want people to know that anything is possible, and you can accomplish what you want to accomplish. You’re not alone in your dreams and aspirations or your struggles. That would be, for me, the legacy of our band.

I feel like it was there from the start. I’m not an original member, but, just from talking to everybody, we’re all from the Midwest and we’d all drive hours to go to shows back when we were kids. (We loved) those bands where you could go talk to the members; they were normal people. Somewhere along the line, I feel like the industry sort of lost that. Everybody wants to be a rock star, and they don’t want to talk to fans. We want to pass on what we had as kids to the next generation and create a community.

Garrett always says this story where he was hoping to be a BMX rider. He got pulled up on a box jump and someone did a back flip over him at a skate park and from that moment on he know he wanted to ride bikes. He did it for a number of years. So pulling that one kid on stage or talking to that one kid who wants to start a band? It’s like, hey, I grew up surrounded by cows and cornfields, I should not be here. I am because I worked for it and I wanted it. Don’t sell yourself short by saying you can’t do this because of where you’re from or your personality. You can change somebody’s life just by having that conversation and sharing your story.

The Color Morale at Warped Tour 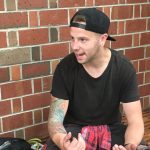 The Color Morale at Warped Tour 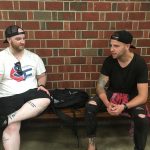 Aaron Saunders of The Color Morale 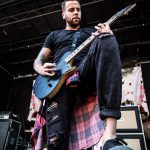 Aaron Saunders of The Color Morale

I wouldn’t even say failure because you learn from every good and bad experience. We’ve had co-writing sessions that we left going, “What the hell just happened?” Our last record was very rushed. We got home from Europe, and we were told, “You’re going into the studio in five weeks,” and we had to write an entire record in a month, which — in our minds — was rushed and could have been better. But you learn from it. You do it differently the next time or apply things the next time — and you don’t do the bad stuff.

For a while, we didn’t want to be a big band. Everyone wants that, but we would hold ourselves back from certain things thinking it wasn’t us. If we put ourselves out there a little more… Like, I don’t like posting on social media, but if I put myself out there more, I can reach more people and change people’s lives.

I don’t even know if I’ve learned anything. I feel like once you’ve done Warped, you know the groove. (This year) the stage set up was a little different. (The run) seems short; we’ve all made the comment that we could do another two or three weeks of this. But, for whatever reason, it’s like, “It’s done already?” 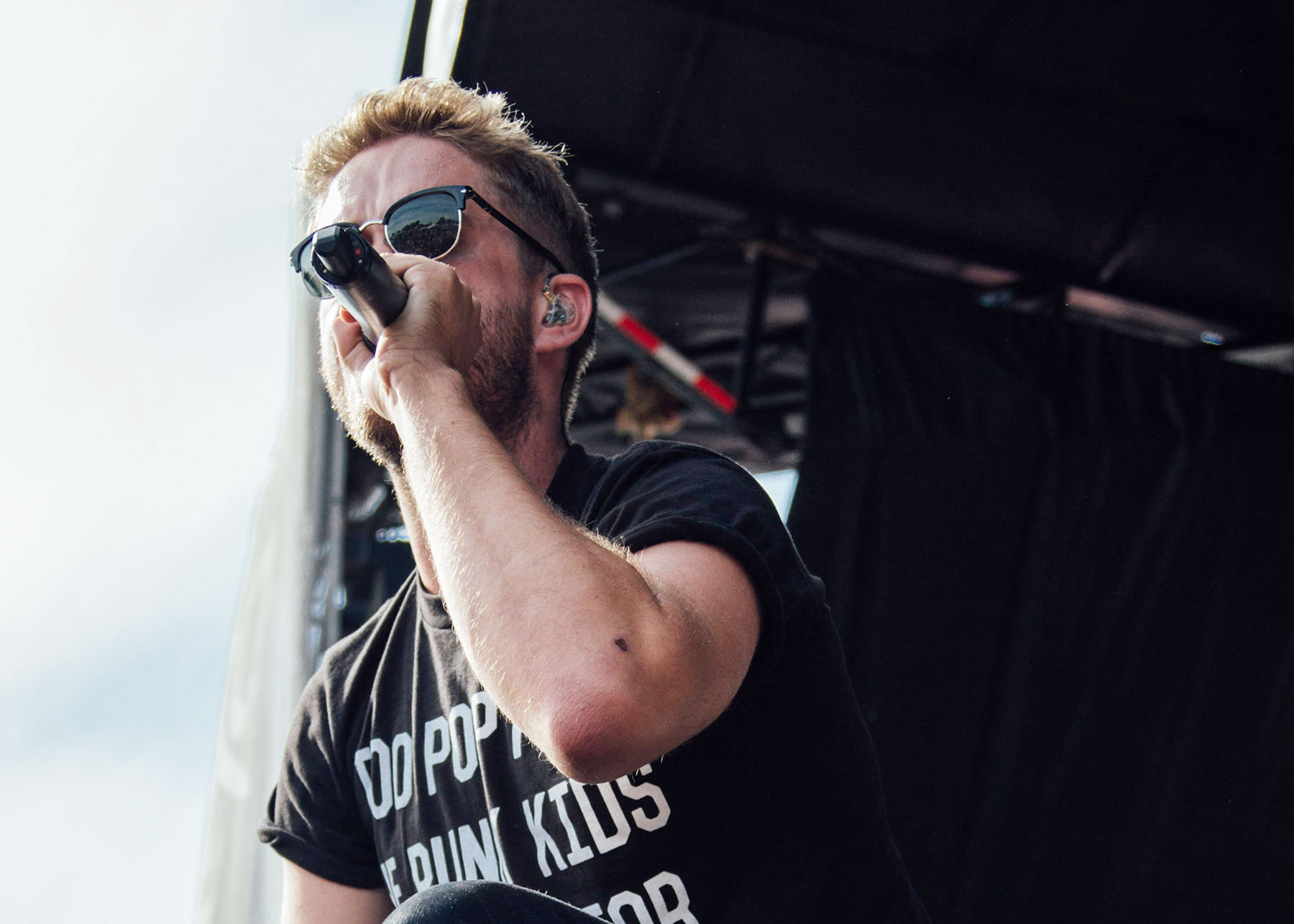 I was fortunate enough to grow up on some great music; my parents knew great music. I want to follow in the footsteps of people I looked up to. At the end of the day — all of this aside — to me, it’s just about great songs. I just want somebody 30 years from now to think even one song I wrote is great and stands the test of time. I want one great song. I’ll settle for one.

That’s sort of an interesting one, because a lot of things that I think were maybe failures we learned from and made us into the band we are. We didn’t know what we were doing when we were 18 and starting a band and signed to a record label that was going bankrupt and having a manager that wasn’t really a manager. If someone gave us a textbook on how to do it, we essentially lit it on fire and threw it away. We essentially gave it to the other side and sort of got to write our own book. Most things I would consider failures maybe ended up being our successes.

The Summer Set at Warped Tour 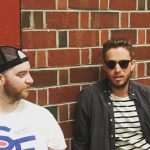 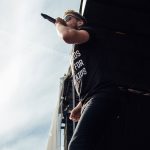 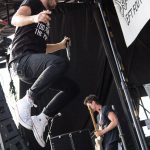 Not growing, plateauing. Always change it up. There are a lot of bands I love and respect who fall into the same things and don’t necessarily get any bigger but don’t get any smaller. To me, I’d rather just take all the risks in the world because I don’t want to do the same thing over and over again.

This is the first year we didn’t do the full (Warped Tour), we just did the last eight shows. You sort of learn to cram an entire summer’s worth of friendships and crowd involvement and adventure into a very short period of time. We just put out our fourth full-length album, and we finished a headlining tour where we were playing 90 minutes to two hours a night. What I learned this year more than any other year is how hard it is to figure out how to cram our set into 25 minutes. We have four albums of songs and our new songs are kind of long, so we have to figure out how to really pack a punch in a very short period of time. I’m somebody who likes to play a long time — I’ll play for three hours. 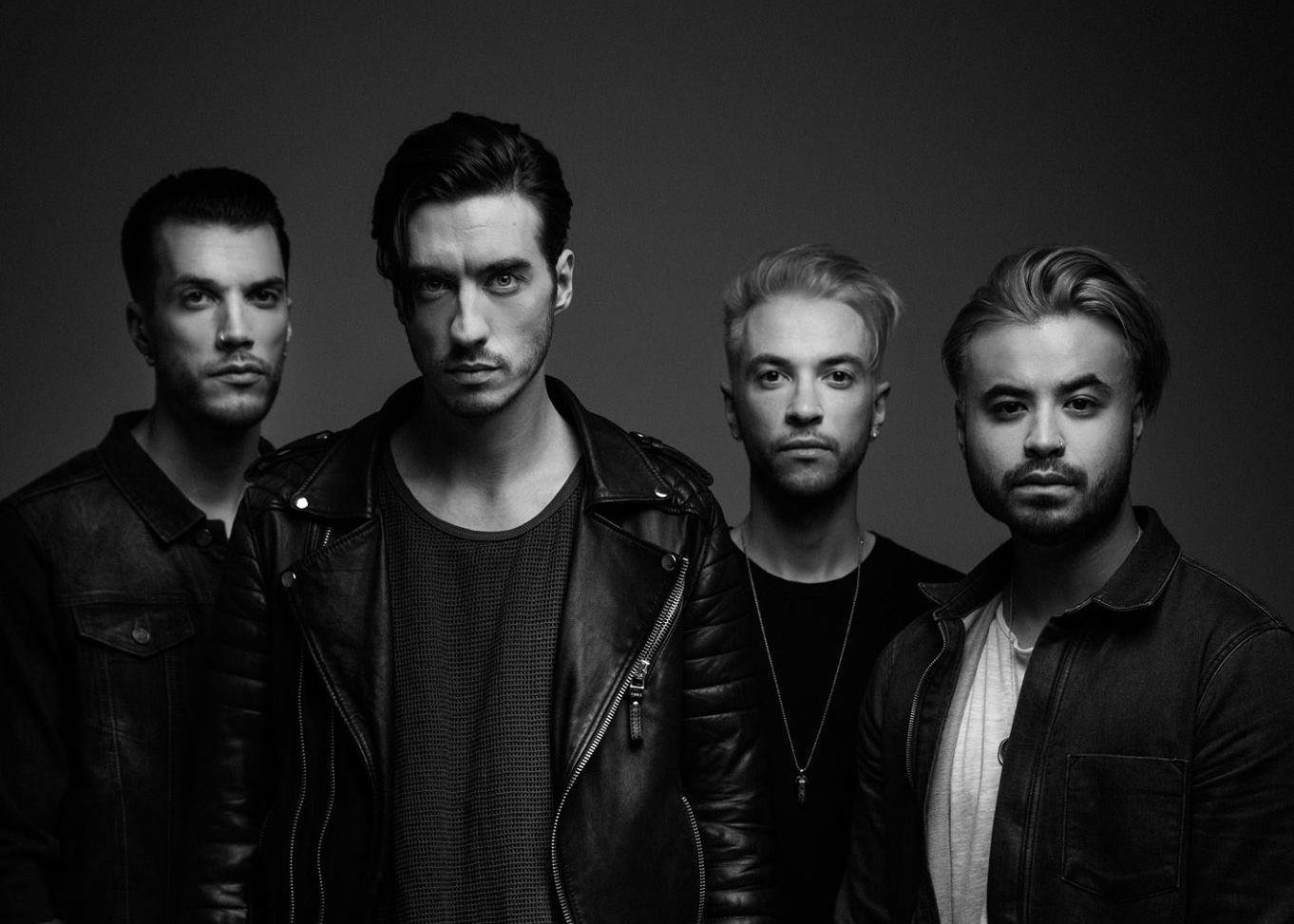 I always feel like no matter what we do it’s not good enough. It drives me to keep creating. It’s frustrating. The last record we spent so long writing it for various reasons, I wish we could be a little more focused and maybe not tour as much.

It’s kind of a tough question to answer. The biggest thing I’ve gotten over is that I’m very much a glass half empty person, so one of the constant battles I’m winning now is this idea of just enjoying it. I get to do something unique that not a lot of people get to do — that a lot of people want to do, and I grew up wanting to do — don’t kick the sh-t out of yourself all the time. Don’t make a small issue a big one and just enjoy what you do and realize you’re lucky. I’m out here among these thousands of people orchestrating this big machine, and I’m standing in the middle of it, standing on stage. It’s a privilege, so just chill out and enjoy it. 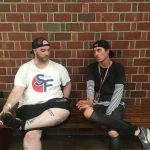 I gained a great degree of self-confidence from this tour. It’s so relentless. You do not have a choice: You are getting up on that stage and playing, and there is nothing you can do. I wake up with one hour sleep and I’m like, “Oh no,” but you get up and do it. We did 21 days in a row on this tour, and I feel like we’re road hardened. I think that’s going to be the thing I take away from this tour the most: self confidence in myself and the band. It’s a good thing. 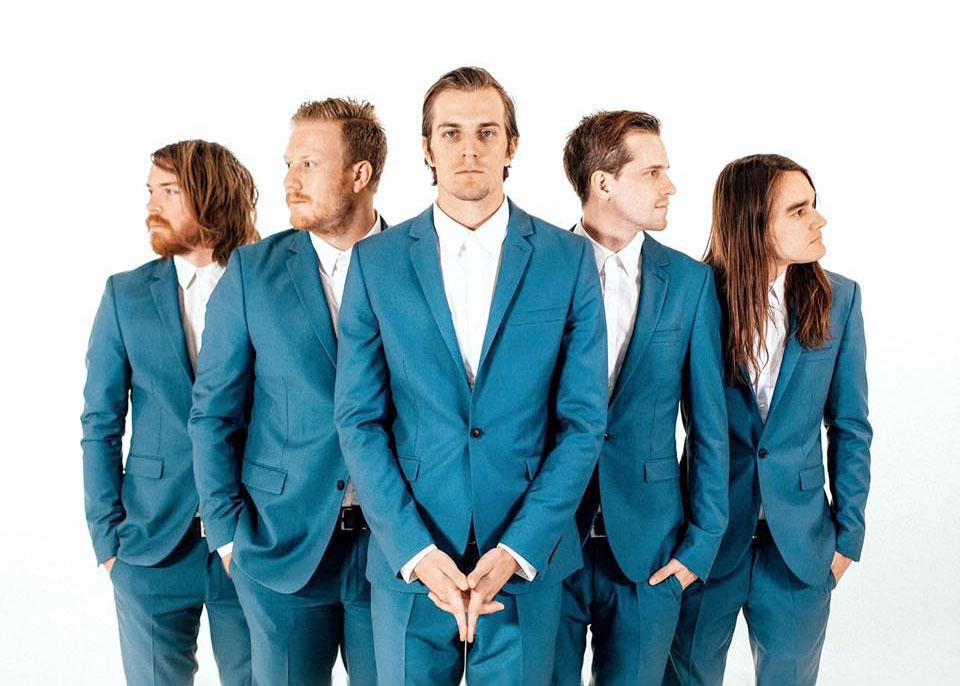 I don’t know if I have any control of that. It’s kind of what people take away from it. Obviously, from people enjoying the music itself, I’d like to think we’re a band who did everything for their fans or didn’t play by any rules. That’s our thing. Those are the people who make it possible for us to do it, so we try and do everything for them.

The Maine at Warped Tour 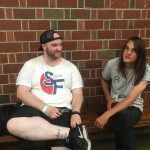 Everything is a work in progress. It’s tricky because I think that everything we’ve done — it’s such a cliché thing — but everything we’ve done has led us to be here. We’ve done some things in the beginning that, looking back, we probably don’t enjoy, but that caused us to go in a different direction that we’re very happy with. For the most, part we’ve had a set of beliefs, and we’ve fought for our fans. I don’t think I would change anything. For us, it’s just trying to make better records every single time. It’s so easy to get caught in the trap of feeling like your past is more important, but, for us, we just want to break all those rules.

Me, personally, I always have the fear of, “This could be it and no one is going to care anymore.” That’s constant, but it’s a matter of figuring out how to not let that get in the way. Or thinking you better not make one bad decision or play one bad show. I think I’ve gotten better at it. This is just one decision out of a million in our ten-year career so far. Or this is just one show or tour out of the many. Does it really matter? At the same time, we take it very seriously. It’s a balance.

I think we feel more comfortable with ourselves. That’s been a big difference this year. We feel like we belong on this tour. Before it was like, don’t bump into the wrong guy, but now we don’t really care. We’re our own band.

Warped Tour 2016 was posted on September 5, 2016 for HM Magazine and authored by Jameson Ketchum.