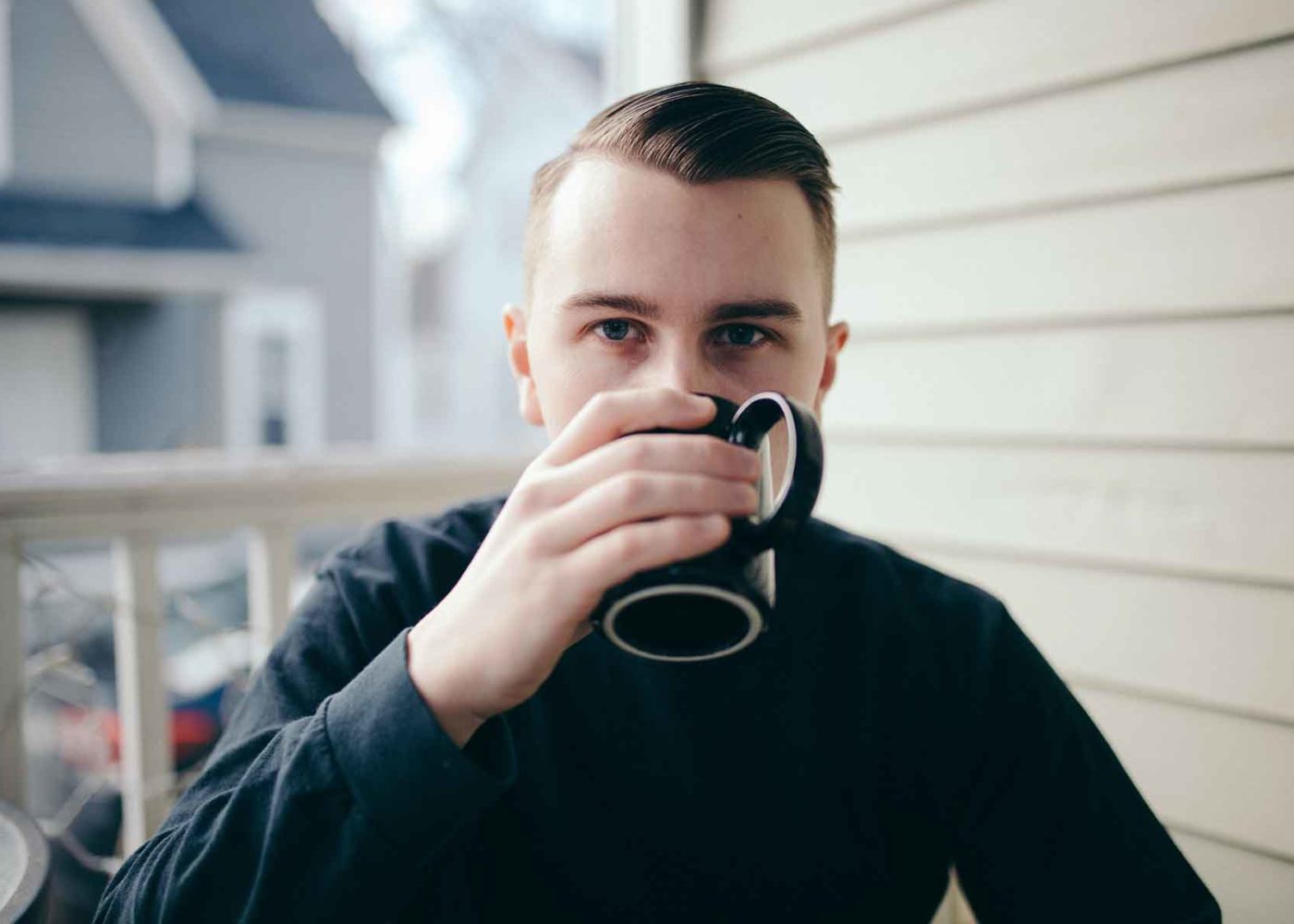 On Vagabonds' latest release, 'Liminal Space,' frontman Luke Dean lives between the seasons but embraced one mentality: "I wanted to create and contribute something beautiful to the world."

Michigan is in a warming state. The winter chill is falling off and a tentative transition toward spring has begun. It’s early afternoon there, but the sky here in Oregon is heavy with rain and a stubborn sun that refuses to shy away. (Yet.) An in-between state, it’s not quite the dark, damp cold that was but is yet to be full of sunshine and light. These in-between seasons can be tricky, but they can also be lessons in appreciating where we are. It’s a perfectly painted backdrop to discuss Vagabonds‘ new ambient and dramatically different EP, Liminal Space, with founder Luke Dean. It’s a day that creates a living metaphor for the album’s title and it embodies what it means to be here now.

HM: As a collection, the mood and the feel of Liminal Space are so different from your preceding work. It’s an intentional pivot. Was that just organic? And most importantly, what inspired that huge change?
Luke Dean: It definitely was an organic thing, shifting the sounds and the mood. It was written at the same time as a lot of other darker songs. There are a lot of those still on the backburner for what the next record is, but this one…

I wanted to make something that would be a little bit easier to play live. (I wanted) to allow myself to musically connect to a different part of myself – and express things other than fighting off the darkness, which I hadn’t done before – that had always existed, like searching for beauty and trying to take care of myself. I think I just wanted a step away to have a breath of fresh air from songs that were more intense in the past. Not to say those kinds of compositions won’t come back in some form, but this record I tried to have just one thing kicking around in my mind going into it: I wanted to create and contribute something beautiful to the world. And create something that I really enjoyed rather than something that had to be created purely on the basis of catharsis or those types of personal problems.

I can really appreciate that. I, too, have dealt with a lot of heavy things in my life, and, in my experience, when you get through something really emotionally burdening, you almost have this romanticized appreciation for what’s still there. I thought there was a sense of that in Liminal Space.
Yeah, I think so, too. More definitively on this record, I was looking at the things around me, too. There’s a love song on this record for the first time, and being able to lean into things that are good. There are also a lot of other things, like the song “Undone,” which deals with me looking at things that were going on in my life that were really intense in a way that was not as cut-and-dry literal as what I’ve written about before.

I really enjoyed “Undone.” There are different ways you can interpret it, and I think your life experience frames that interpretation. It did seem like there was a religious component to it and maybe how you view “Undone” would be based on your experience with religion or church.
Yeah, that definitely weighed into it. That song came about when I was going through challenging that stuff in a religious context. I was watching things go awry in my personal community and I was reading – I forgot what book honestly – but it talked about Nero and his failed leadership. “Undone” touches on some myths about Nero’s leadership and doesn’t lean too hard into a historical retelling, using that as a metaphor for poor leaders or people we look up to that kind of set themselves up.

The love song on the album I was curious about from an artistic standpoint. What’s more difficult to share: something that’s like that, or something that’s about your more difficult life experience?
I think it can be easier sometimes to make painful art seem beautiful and easier to attach to it. I wanted to challenge myself to make something that was framing a completely different portion of my life than I’ve shared in the past. It was almost disarming to share that part of myself publicly because I’ve never been a very publicly romantic person.

How have your fans reacted to that? Have they heard it live yet?
They have heard it live, they haven’t heard it recorded yet. I’ve been playing out with the string section and with drums as much as I can, which I think people have really liked. People like it very differently than they did the old songs.

I played a show a little over a week ago in my hometown, Grand Rapids, and I played most of the songs off of Liminal Space and one song that came out even before I Don’t Know What to Do Now. The reaction to the old one was yelling along, grabbing the mic, and jumping around whereas people react to a song like “Patience, Longing” in a way that’s more observant and thoughtful.

I don’t want to get too much like an artist that will just sit on the stool and have people ponder what I’m playing. I still like to be interactive, but it’s nice to have a mix of both. I think people appreciate the intentionality of the new songs where they more so appreciate the release and transparency of the old ones.

Something you specifically have taught me is the fact that when I first met you, I didn’t understand the DIY scene. Through our conversations, I learned a lot about how much work is involved and how many facets of it there are. Coming into listening to this with that knowledge, I was blown away by the fact that this album is something you created on your own.
On this one, I had a little bit more help than the past few, which I think shaped the record in a really positive way. This record was still made in a basement, but it was with a little bit more equipment. My friend Matt spent a lot of time creating this studio in his basement. So we tracked it down there, just me and him most days, and then my friends who play the strings and drums on it would come in one by one usually, sometimes as a group, and play along to it. This one was more of “doing it together,” too, but still on a tiny budget, self-funding with each paycheck I would get from working at the coffee job I was working at the time.

This one, in a sense, is even more of a DIY record than the last – even though I had more help with the physical recording – because it’s being self-released. I think I expect it to be received a little bit different than the last in that I think I will have to pick up touring a lot more again. I think it’ll be a little bit more of a slow burn because there isn’t any higher PR and there’s no label that’s said anything about it. It’s just the people whose attention I hopefully still have and the people that they choose to show.

It’s going to be a little bit more challenging even than the last record, which did come out with some help from a label, even though it was a pretty small DIY label in itself. It’s definitely a lot more work trying to do it somewhat more legitimately. Like, I’m doing layouts for all the cassettes and CDs and fronting all the money for those to be produced and sending out everything for my own PR, to tell people about what this is and hopefully why they might get something out of listening to it. 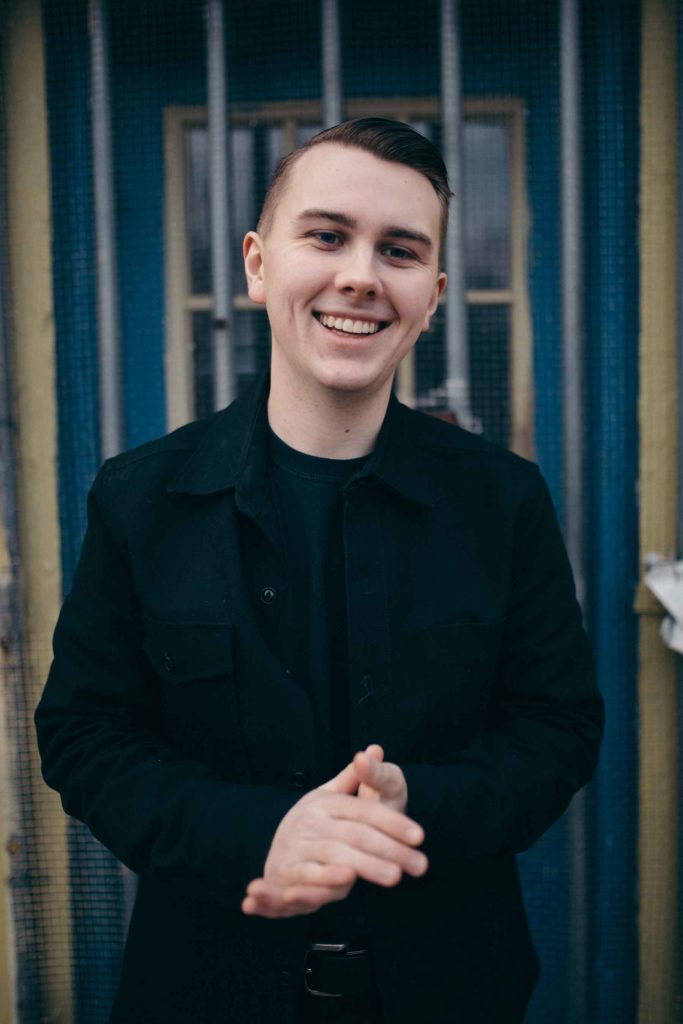 Who did the artwork for it? I thought they did a really good job illustrating the emotional fluidity and that meditative calm.
For sure! That was my friend Cameron Klingenberg. He plays in a hardcore band in Grand Rapids called Bitter Truth, and those are all really good friends of mine. We used to go to church together and I lived with them. He doesn’t usually work in that specific painting medium. We came up with the palette it would use and then he put together a handful of preliminary sketches and chose one for the front cover and one for the back cover. I think he really captured it super well, too. I was really happy with that. That was another place that I relinquished some control because I’ve always done the artwork for everything I’ve released.

Was that hard or was it a little bit of a relief?
I think it was both. It was hard in the sense that (I didn’t have) the same control. In another sense, it felt nice not having to be so exhausted by every point of making this piece of art. Sometimes, in the past, I’ve been a little bit overwhelmed trying to cover every single aspect of all this.

When I see records, I think about how they sound. If I’m in a record store and if (an album cover) has a certain font, color palette, and style, I’ll think This sounds like a ’90s vegan straight edge record, or this is a folk record. So yeah, giving away how people will perceive my music (from the artwork) is slightly challenging in some ways, but I’m really happy I did it. He did a way better job than I could have done with it myself.

Do you have any desire to get Vagabonds to a point where you’re out of the DIY realm and you do have that full label support?
Yes and no. I think there will always be an element of DIY in Vagabonds, and I don’t ever want to be at the point of not wanting to play a house show. I would have lost a part of myself if I ever felt like that. Someone like David Bazan from Pedro the Lion, he still plays house shows regularly, still tours regularly through people’s living rooms, but also he can go out and play the mid-sized rock club in any town and do that pretty well. In my future, that’s the kind of balance I’d like if I can get it there.

I think having a label next time I do a full length (or maybe the record after that) could be really beneficial. If it was the right label that had the right mentality and right background that cared about the project, I would probably be open to working with one; it would have to be someone who shares similar visions at some level if I were to do that. But I don’t think it’ll go to the point of “full-time manager, tour manager all the time, and agent for booking, and a label and PR” – at least not for a while. If that universe where all these people were on board even existed, I would still want to play house shows. I think that it’s just my natural state.

Vagabonds was posted on April 9, 2020 for HM Magazine and authored by Danielle Martin.