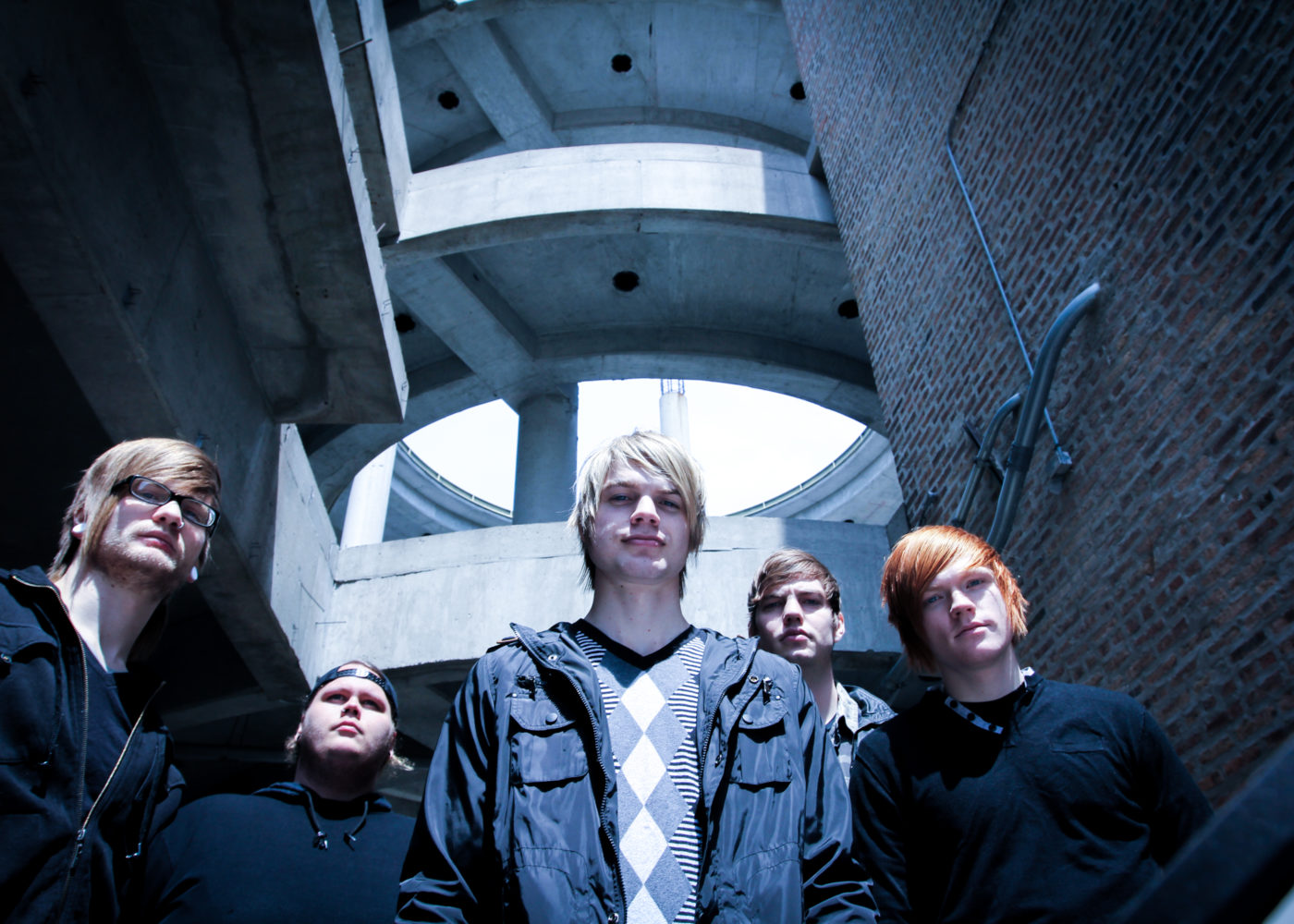 When these hearts releases its third album this July, they will likely have made some people mad.

Some fans might feel betrayed, as chant-along hardcore has given way to pretty-boy pop punk. The band utilizes the gang vocal lifeblood of hardcore (a la Comeback Kid), and they channeled it into both a passionate bloodletting of energy and an outpouring of emo angst. Talk about conflicted – what else would you expect coming from a band out of Fargo, North Dakota?

Either way, These Hearts are one of the hardest working young bands in rock today, and there are going to be girls at their shows. (Learn to embrace it.) The sonic formula produced by combining all the collective influences of vocalist Ryan Saunders, bassist Tyler Rice, drummer Isaiah Folk and guitarists Kyle Colby and Daryl Van Beek is matched by lyrics that marry life experience, boy/girl relationships and struggle.

The expert hands of Andrew Wade (A Day to Remember) mixed the band’s latest effort, Yours to Take, and metal guru Joey Sturgis mastered the album. The results are sure to somehow cross the snobbery divide between their metalcore breakdowns, and the audience holding their hands above their heads, using fingers and thumbs to form the shape of a heart.

The relational rifts belabored are a tad more mature than your typical high school fare, and some of the bigger questions of life get tossed around in the mix. “You know,” ruminates Saunders, “people think we do it all for the girls, but I’m married, another member is married and we have another member that is engaged and the other two have girlfriends.”

It’s refreshing to hear a bit of balance coming from a band that smiles for the camera and their audience as much as a band like These Hearts does. One byproduct of the cute-boy looks is a pretty evenly split audience, male-to-female. Saunders rides the middle with the kind of ease that it takes a politician years to learn. “Honestly,” he said, “I wouldn’t miss any sort of attention girls coming to our shows brings. It is really about if there is a crowd there or not, and if they are interacting, having a good time. That is what it is all about.

“Guys at our shows are a lot more active,” Saunders continued, “moshing or dancing or just jumping around. Girls are more so just screaming and kind of doing their own dance type of thing.”

With this kind of positive attendance at their shows, you might wonder how a band of their stature could write a lyric like, “We’ve been through hell, we’ve got a story to tell, but we’re having the time of our lives.” A sad song like “Miserable,” a melancholy chorus like, “So much for happy ever after…” A call to arms like “War” (which features guest vocals by For Today’s Mattie Montgomery), or bring up words like “challenges” and “struggle” in an interview. Saunders pulls no punches when talking about the source of his tension.

“The biggest challenge was being away from home. I got married pretty close to before the last album came out. You are supposed to be starting this new life together, and then we find, shortly after we get married, that if you go out and be on the road more than you are home – the biggest struggle is making your relationship with your wife work. You’re trying to have fun and enjoy where you are at, but you’re also missing a girl. That is why a good chunk of the songs on this album deal with missing your significant other.”

Everybody that reads this is probably in a relationship of some sort. Not everybody has a girlfriend or a wife or whatever, and not everybody is in a band, but people have relationship struggles and challenges. What are some of the top lessons you have learned, and what kind of advice would you give as far as something you have experienced that’s helped with relationships?

“For a Christian relationship, you always want to keep God as your first priority and your significant other a close second, but if you are in a secular relationship (or if you aren’t a Christian), then the key is communication and honesty. With technology, there is Skype and you can see your girlfriend’s or boyfriend’s face, hear their voice and, if you can talk to them with Skype and FaceTime and all that, it’s not too hard. You just have to take time out of your busy schedule to say, ‘Hey, how is your day going?’”

Switching gears back to the band’s conflicted yet credible music, Saunders revealed that he personally leans more to the heavy side of things. “I grew up listening to Blink 182, Reliant K – all the pop punk – so it is definitely easier for me and the band to write pop punk. But we love throwing breakdowns in there to make it a little more aggressive and fun to listen to. We definitely write more pop punk, and then go with a hardcore as a secondary influence.

“For this album,” he continued, “we didn’t really think about how it was going to be performed live or anything, we just concentrated on making them the best songs possible. We made the choruses rich and easy to sing along to for everyone to grab a hold of. We are just now playing the songs live. We certainly didn’t purposely think about whether this song or that song would sound great live or anything. When we’re crafting a chorus, we’re not so much thinking about a single person in the audience singing along, but our desire is to make the chorus stand out and flow really well.”

Anyone that’s seen the band at a festival or promoting an upcoming live show will quickly realize these guys work hard at presenting their band and it works – they get a lot of attention. There seems to be more involved than just getting girls to smile back at the band; there’s a hardworking ethos and a spiritual motivation.

“Our band’s goal is to try and show God’s love through our music, our performance and, most of all, our relationships with our fans and our audiences,” Saunders said. “That is why we are working so hard to get out there and talk to people. We play this music just to meet everybody. We work hard, and, if we can reach just one person and make their day that much better, it’s all the more worth it to us. It is definitely why we are doing it. We are showing God’s love through our relationships, and show all these kids that need attention.”

Even though These Hearts have been pounding the pavement to get to where they are, they carefully measure their patience against their energy trying to get noticed. “I like to think of myself as a pretty patient person,” confesses Saunders, “but, when you are in a band, you want big things to happen – and you don’t know whether they are going to. Very few bands just blow up overnight, (but) you always have that hope . You always want more people to hear your name, but you have to be patient and let God use your music and what He is going to do with it … Use your abilities at His time, you know?”

If their excitement to get back out on the road to promote this album is any indication, their patience appears to be wearing thin. “We took a pretty good break to finish up writing and recording this last album,” Saunder said, “so it will be nice to get back on the road. We are doing a short headlining tour, and then we are kind of seeing what happens after that. I think we are hitting all of our favorite places to play, so it is really exciting.”

These Hearts was posted on July 3, 2013 for HM Magazine and authored by Doug Van Pelt.