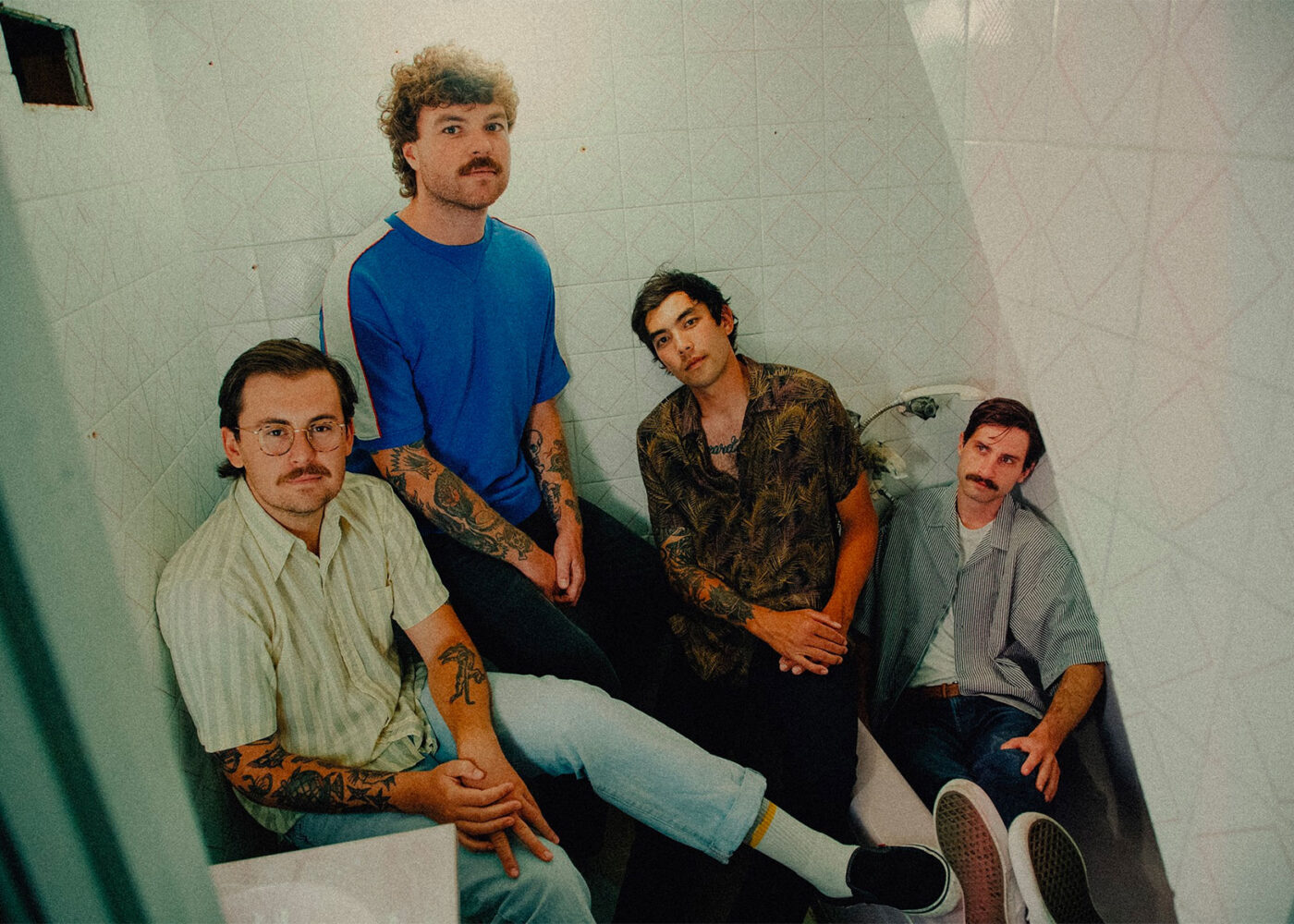 Today, Ryan Locke looks like anyone you might see in a coffee shop hanging out with your friends with his glasses, black beanie, and zip-up hoodie. But if you saw him in the video his band Seaway just released for their single “Mrs. David,” you may mistake him for an entirely different person. The song matches the Bowie-inspired video, complete with ’80s finesse and loaded with power-pop flair. A musician that claims to enjoy the pageantry of stage performance, it doesn’t take long to discover that Locke also has a true affinity for the artists that largely inspired Seaway’s latest album, Big Vibe, with its huge hooks and sticky melodies. The record has, perhaps, some of the most color and life that has come out in 2020.

Danielle Martin, contributing writer for HM, had a chance to talk to Locke about how he and the band evolved from their punk-rock roots into power-pop heroes, what makes this era so special for Seaway, and why they need to ring up Harry Styles.

In some interviews you’ve done, you were talking about how this album was the one you guys felt best represented where you wanted to be. I’ve heard a lot of artists say that the best music that they’ve made was when they stopped listening to what people were telling them to make. What do you think helped you get here with this album? What made it different?
Ryan Locke: I guess the reason this one is different is, maybe, because we realized – after doing things the way we’ve been doing for, I’d say, the last two records (Colour Blind and Vacation) – we were taking into consideration what the label had to say and what people think about us. Clearly, it didn’t get us to that next level. All the success we’ve had has been great, and I wouldn’t trade it for the world, but – being super critical of ourselves – I think we realized that if we kept going that way, we knew where it was going to get us.

So, it is one of those introspective things, like, okay, if we’re going to get to the next level, we’re going to have to do something different. That, for us, wasn’t going, “We need to completely go pop-rock on this record.” There’s a lot of pop-rock influence and some seriously poppy songs on the record, but there’s also some heavier hitting stuff on there. For us, it was really kind of a fuck-it thing, like, let’s just go in, and let’s just make the record that the people in this room want to make, you know? The label’s never pushed us in any way, but they have their input, and it’s been helpful. But, this one, they’re just like, we don’t want to push you in any sort of direction, we want you to just go in and make the coolest, most different, weird – whatever it may be – just go in and do that.

There’s the internal pressure that we felt, but there was not as much external pressure. I guess that’s the difference. After Colour Blind, we were like, this is the make-or-break record, and, two years later now, we realize it’s not really make-or-break. Maybe it could have made us, but it’s not going to break us. It’s not going to completely bomb or we’re not going to get kicked off the label at this point. So it’s more like, how do we set this (new record) apart? Let’s do something different. 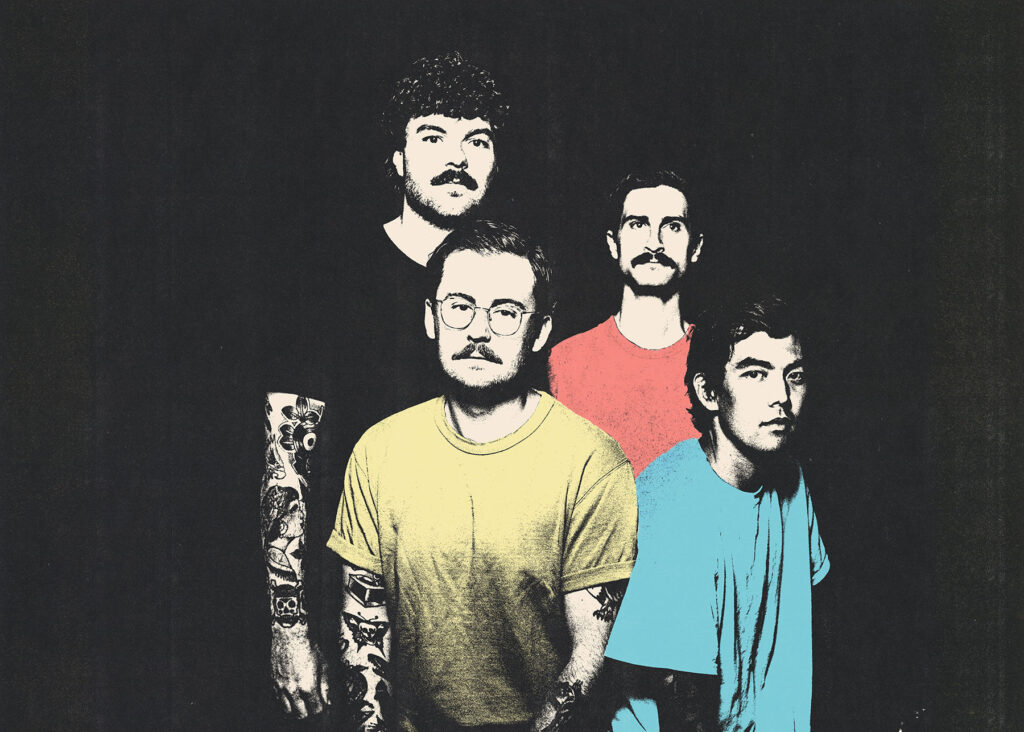 One of the things I absolutely love, especially in the videos, is this eccentricity about it. There’s very clear and obvious influence from David Bowie and that generation; it was a hallmark for the ’80s. You don’t see a ton of that now, which makes it even better. He had an aura about him. What was it about him that made you want to draw off that influence on this record as heavily as you did?
It starts with being such a fan of his for so long. It’s not something where I just found out about David Bowie; I’ve been listening to Ziggy Stardust and The Spiders from Mars and all those records since I was a kid, really.

It’s the artistry of David Bowie, specifically, that I’ve always been super drawn to, how every single record – from Ziggy Stardust to Aladdin Sane – are completely different worlds and looks and characters that he’s building through those (records). I wouldn’t say there’s a character on Big Vibe or anything, but the uniqueness and individuality and artistry of that speaks to me a lot. I always liked the idea of getting up on stage and, “This is the person I am on stage, but maybe I’m just wearing a hoodie and chilling when I get off stage.” We work really hard to set ourselves apart on the music. For a video and for live stuff we’ve always tried to do that as well.

As somebody who’s consuming the music and the videos, it’s fun to watch. A lot of people in our generation and younger have no idea about any of the references in your music, so it’s a new thing, as far as they’re concerned. It’s cool to bring new life into it.
For sure. It’s something different.

This album was such a breath of fresh air to me. It was a bright spot in this nasty dark storm of a year. I can’t even imagine how it’s going to hit in the summertime.
It’s funny because Colour Blind, Vacation, and now Big Vibe have all come out in the fall. For Big Vibe, we had it planned all out so that we would be recording in the winter instead of in the spring to have a summer release, but with the COVID stuff, it just ended up coming out in the fall. A summer record coming out in the fall in maybe 2018 or 2016 is a lot different than hearing one come out in the fall of 2020 because everyone’s kind of fucked up about everything going on. It does hit a bit differently.

You guys have done some really cool covers, and that’s always a nice thing to add to the discography. If you could have one of your songs covered by any artist in the history of music, who would it be and what track?
John Mayer covering “Big Vibe” or “Wild Things” I think would be cool. If Neil Young could do “Sick Puppies” but a bit grittier… Who else do we love? Harry Styles covering “Mrs. David,” that would be sick.

That would be amazing. You guys could almost just do a collaboration, I think.
(Laughs) Yeah, we’ll see if we can call in some favors!

Seaway was posted on November 11, 2020 for HM Magazine and authored by Danielle Martin.