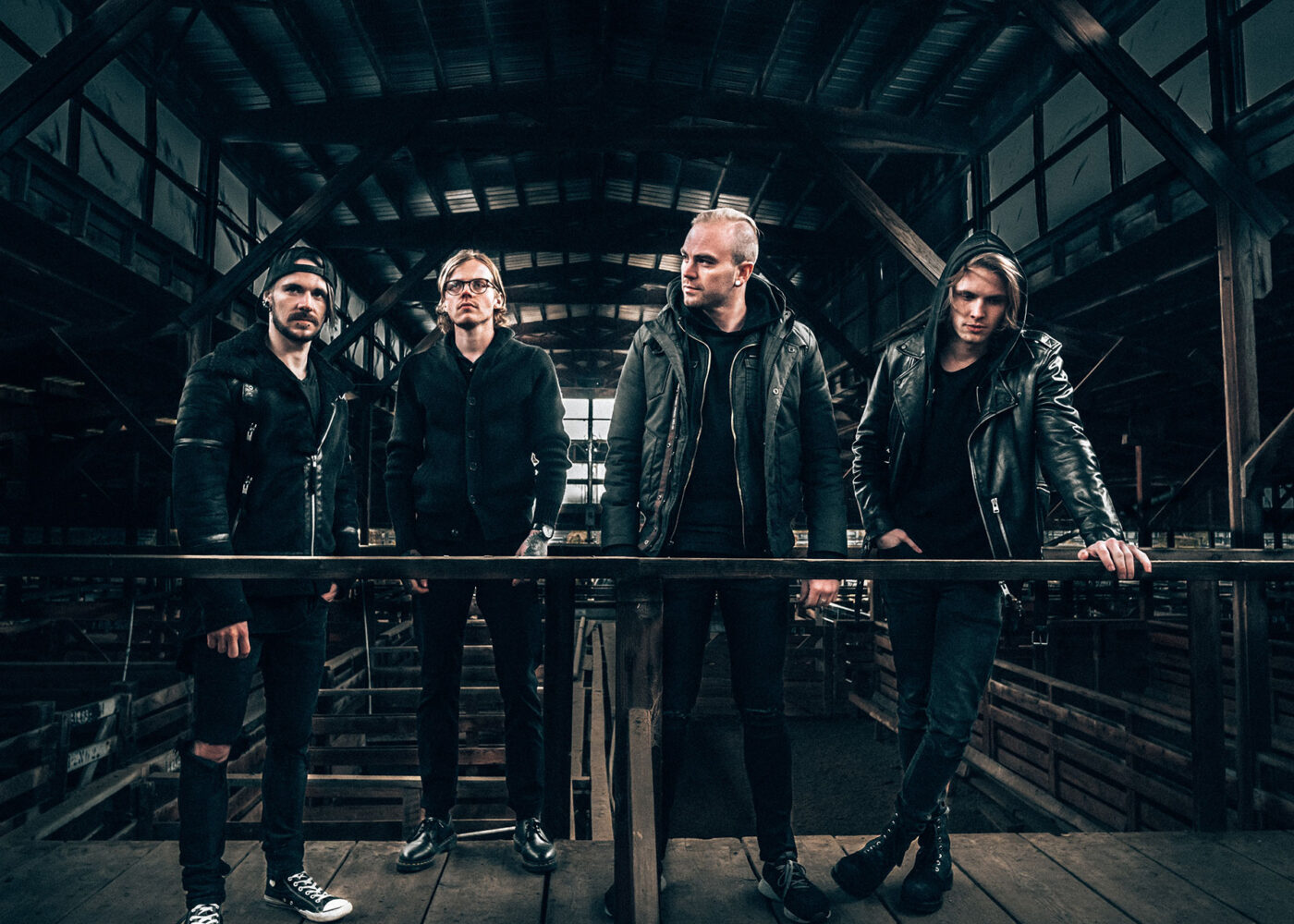 After canning the entire album in 2015, Righteous Vendetta is ready to release 'Not Dead Yet' and prove they're still thriving. We recently got to sit down with Ryan Hayes, vocalist of Righteous Vendetta, to discuss the band's upcoming album, life in the Mountain West, and how the pandemic has him venturing into country music songwriting.

The state of Wyoming is known for many things, including skiing in Jackson and delicious bison burgers (first-hand account, I’m biased). Throw in the Snake River and Yellowstone National Park and you have yourself a beautiful piece of Americana.

Now? Add some metalcore into the mix and there’s little that compares to such beauty.

Thanks to Righteous Vendetta, Wyoming can say with confidence that rock music didn’t pass them by. And though Wyoming birthed them, the band is still putting out music, though they have since relocated to Montana. But now – 11 years later – they’re doing it independently. Oddly, as the global pandemic has limited the number of people’s freedom to move about the cabin, it’s given Righteous Vendetta the freedom to share their music with fans in any way they desire. The band, who just recently released their first new single, “Gunpowder,” since 2017’s Cursed, we can be quite sure that the energy and passion that defines Righteous Vendetta isn’t dead yet. We recently got to sit down with Ryan Hayes, vocalist of Righteous Vendetta, to discuss the band’s upcoming album, life in the Mountain West, and how the pandemic has him venturing into country music songwriting.

HM: You guys are from Wyoming?
Ryan Hayes: Montana. The band is from Wyoming, but we don’t live there anymore; we all live in Montana now.

And from what I hear, Righteous Vendetta has a new album due soon!
Well, it’s not a new album. The record that we’re going to be releasing that we’re calling a “new album” – even though we’re not, we’re telling people that it’s “old” – we recorded it in 2015, right when we signed with Century Media. We recorded the album, we had it mixed/mastered, all of it was done. They got the album back and the label was like, “We absolutely hate this record; you’re doing another one.”

You canned the whole thing?
The whole thing. That’s why it took us four years to release a new record. We scratched that entire record, and that’s where Cursed came from. Cursed was the product of them hating that record. We’ve been sitting on (the upcoming album) since 2015. We’ve released a couple of singles from it, like “Kill the Lights,” and then three songs from it came out on our re-release of Ignite the Fire Inside, which they made us take down when we signed the record deal.

There are still 11 songs that never came out. We weren’t going to release them. We were sitting at home and COVID hit, and we were like, “Dude, let’s just release them. Let’s just do it. It’s done; they paid for it. It’s free money for us, free music for everybody else” (laughs).

What’s the title of the album?
The album’s called Not Dead Yet. We released the single “Not Dead Yet” already.

“There’s a lot of wild songs on there, left-field songs you didn’t expect us to write. It’s anywhere from straight metalcore to Nickelback rock. It’s like Nickelback on crack.”

You guys wrote all of this prior to 2015?
Yeah, this is like 2013-2014. It was right after Lawless, really. It’s so old. To us, we’ve been sitting on it for so long. I actually listened to it for the first time all the way through a few months ago and that was the first time I had listened to it in, like, four years, and I was like, “Holy cow! I forgot about this!”

The cool thing is, it may be old to you guys, but it’s new to us.
Yeah, it’s gonna be super new. I became such a better singer after the fact, so I listen to it and I’m like, “Ugh. I hate this.” I’m actually excited for people to hear it because it is very different. There’s a lot of wild songs on there, left-field songs you didn’t expect us to write. It’s anywhere from straight metalcore to Nickelback rock. It’s like Nickelback on crack.

The song “Gunpowder” was written… The label told us, “Don’t focus on anything but writing a radio hit.” We were like, OK, fine, whatever. And that’s what we wrote. We wrote it in one day. Me and the guitar player wrote it in one day. Just threw it together and the label was like, “This is it; this is the song that’s gonna blow you guys up, blah, blah, blah…” All this stuff. Obviously, that never came out. There’s a lot of history to this song and this record.

Were you planning on releasing this album the past few months, or was this a spur-of-the-moment decision?
This was a COVID-19 knee-jerk is really what it was. We’ve got new stuff that’s done that we’re waiting to release. But we thought, man, this is a perfect time to get this out there and see what happens with it. We just released “Unshakeable,” which is probably the heaviest song we’ve released in eight years. It didn’t do that well; people weren’t that into it. We thought people wanted us to go back to the heavy roots, but it didn’t perform like our song “Kill the Lights,” which is off this (new) record. That (song) still is on two of the major rock playlists on Spotify. It just hit a million spins today, so we’re trying to figure out what people want from us because it’s really hard to know what people are into.

“We’ve got new stuff that’s done that we’re waiting to release. But we thought, man, this is a perfect time to get this out there and see what happens with it.”

Honestly, in this era of hard music, I’m not sure you can appeal to everybody.
You can’t. You can’t. We’re metalcore kids. My favorite bands growing up were As I Lay Dying, August Burns Red, and Haste the Day. Obviously our music is gonna be like that because that’s what we love. We’re trying to do our own thing with that.

Do you plan on doing a tour once it’s safe to return to the stage?
Yeah, as soon as this COVID stuff is over. Who knows when that’s gonna happen? We’ve already canceled two shows. Our big home show? We haven’t played in our hometown in three years, so we had to cancel that. We were supposed to be going to Europe in October and that’s going to be canceled.

During quarantine, what is the weirdest, coolest, or most enjoyable thing you’ve done?
Man… I’m not a Vegan, but I kind of went on this Vegan kick. I was like, “OK, I’m just gonna try it and not knock it.” I read this book called Eat to Live by Joel Fuhrman and, for a week, I was shoving spinach in my mouth, like only eating that.

But now I started making homemade hummus that is absolutely, incredibly good. That’s my thing now. I made three batches last night; I do it from scratch, too. Raw beans. All of it is raw.

I was very productive over COVID. Several other artists have been doing side projects outside of their roles in their “main bands.”

Are you working on anything outside of Righteous Vendetta?
Actually, I’m in the process right now. Me and Justin, the guitar player of Righteous, we started a country band. We’ve got this TikTok-famous guy named Jonah Prill, and we’ve been producing and writing this new record for him. Completely left field compared to what we do for Righteous, but we love country, so we’ve been working on that.

What inspired you to write country music?
Justin has been into country since I’ve known him. Even five years ago, I was like, dude, country sucks. I hate it, I can’t stand it, I don’t get it. Over the past five years, I’ve started listening to some of the newer country and really started to appreciate their writing. I’m like, “Wow! I want to do this; I want to try this!”

I’m from the country, man. I’m from Wyoming. We’re as country as you get. I tried writing my first country song and everyone loved it. So, I was like, “Oh, I’m a Country writer now!” (laughs). So, I just started running with it and writing songs. Next thing you know, we had a couple of meetings in Nashville.

The thing about the project is, we’re not the focal point. Me and Justin are just the dudes in the band. We’re producing it and writing it all, but the main focus will be the TikTok guy. He’s already six times as big as our band will ever be just from TikTok (laughs). But that’s what we want. We don’t want to be like “the guy” or the frontman; we just want to be the dudes in the back who are just rocking out.

Returning to the “new” album, is this going to be one of your heavier records?
Dude, it’s like rap-rock, nu-metal, super-aggressive Limp Bizkit without the stupid lyrics. I do a lot of rapping, like scream raps. It’s different, man. The label hated it. They were like, “You’re trying to be a rapper!” And I was like, “Well, so? It’s cool!” There’s a ton of heavy stuff and, obviously, the catchy choruses – that’s what we love. It’s right up the alley of “Not Dead Yet.”

You also said you have some new music in the works?
The new stuff is already done; we could release it now if we wanted to. It’s more in the vein of what Cursed was, like that theatrical, movie trailer, exaggerated, catchy choruses, super-heavy verses – exactly what you’ve heard in Cursed. But we’ve been experimenting with Pantera-kind-of riffs. We’re not bound to anything anymore. We want to give people that feeling like, “Man, this is awesome!” on as big a scale as we can.

COVID-19 has really affected the music industry, especially artists who depend on touring. How can we best support you guys during this time?
Our band is so blessed and so lucky that we got out of our record deal when we did. Now, whenever we release music, we keep all of the streaming money, all of the sales – everything comes back to us. One hundred percent. That’s why bands tell you, “We have to tour or we can’t make money” because those record labels are sucking them dry. They’re taking every single penny that band makes on a sale and keeping it because that band owes them money.

The best way to support us is to stream the music; just listen to it. Go back to our socials and say hi and comment and keep that relevant, so that when we do release new music… As long as people know we’re releasing music – we have such a great group of people that follow us – we just need them to know. The battle isn’t if people know who we are, it’s whether they know that we actually released a song or not. Because it’s so hard to fight through the noise of social media without spending thousands of dollars to promote your post to people that already like you.

Righteous Vendetta was posted on June 13, 2020 for HM Magazine and authored by Andrew Voigt.