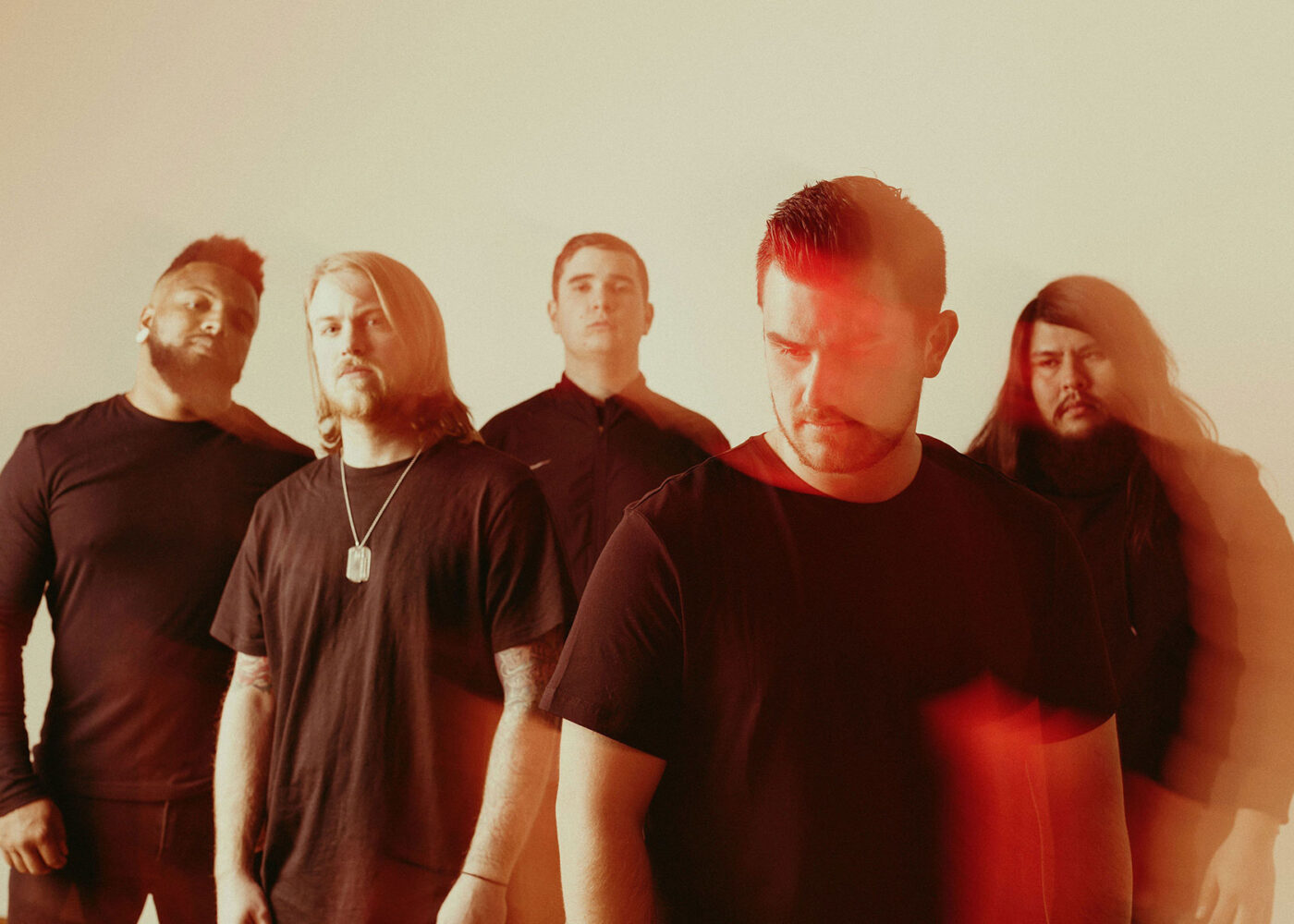 Despite metal’s by-nature niche following, a band Michigan should celebrate is Of Virtue, the in-the-orbit-of-Lansing-based quintet embodied by Damon Tate (guitarist), Tyler Ennis (vocalist), and Michael Valdez (guitarist). With three albums under their belts – including their most recent, What Defines You, which was the first with SharpTone Records – Of Virtue is no stranger to earning their stripes. Signing with a reputable label is a massive leap for the band, yet it is a residual of the hard work Of Virtue has put into their craft. Currently, Of Virtue is working on their fourth album with Josh Schroeder and Andrew Baylis (that will be their second release on SharpTone Records), but they are planning to release a deluxe edition of What Defines You, including five re-imagined tracks and two B-sides. Andrew Voigt, a contributing writer with HM, sat down with the three bandmates to discuss vinyl record requests on social media, how they are the craft beer of bands, and why Detroit sports franchises are really, really not… good.

Of Virtue’s upcoming single, “Torn Apart,” comes out on Nov. 13.

Michael: I’ve never noticed that. That’s the first time someone ever pointed it out to me. I have a tendency of focusing on weird, non-essential details about bands.

Tyler: That’s what’s cool about it though. I like those kinds of questions because that’s not a normal question (laughs).

You have a new single of the song “Torn Apart,” which is an acoustic version coming out Nov. 13. What inspired going with an acoustic version?
Damon: Honestly, it’s a different way to branch out. It’s acoustic-based, so there’s gonna be a little bit more going on with it. You hear more stripped versions of songs all the time, and it’s an area we really haven’t gone into. There are plenty of bands that we’ve grown up with that do all different kinds of versions of songs. It’s something we haven’t done before.

We all love that style of music. I would even say for me personally, it’s a challenge because you can get up there, you can scream and do all that stuff, you can hide some flaws. But, when you’ve just got an acoustic guitar and you’re singing into a mic and that’s it, it’s like, “Oh! That’s how I sound” (laughs).

You guys also are planning to release a deluxe edition of What Defines You that will include two unreleased B-sides. I’m curious: why did those songs not make the cut on the last album?
Michael: One of them is titled “Ghost Town.” That was the first single we actually wrote and recorded with Tyler. I think, at that point, when it was time to do the album, we felt like we had progressed from that song. We had played it for a while. We felt like it wasn’t in the right place to be on the album. The other song – I gotta be honest with you – I don’t really know why it didn’t make the cut.

Damon: I know why. With What Defines You, as a whole, everything about that album is completely different from our old sound. With that one, we already had some experimental-ish tracks. It kind of boiled down to, “Which one of these do we think would possibly do the best on an album?”

Tyler: I think that’s the coolest part about releasing a deluxe version. We’re able to give those both the chance. 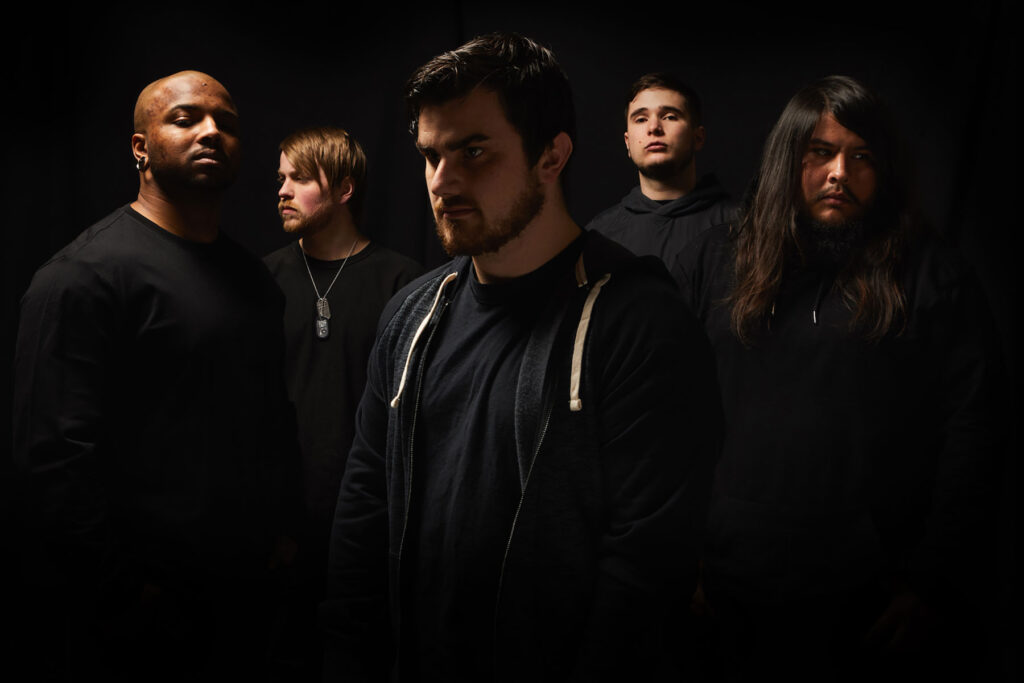 So, I was told you’re in the process of making new music. Can you describe the vibe of the upcoming album?
Tyler: That’s actually kind of tough.

Michael: You could probably get three different answers to that question.

Let’s get the three answers then. We’ll start with you, Damon.
Damon: It’s something (laughs). Just catchy. Big. I want to say the strongest parts of the last record. One of the cool things about that record for us is that we recorded it in three sessions and in-between we were touring. It’s cool we had the chance to do three songs, tour and test them out, go back into the studio, go back for a few months… You really get to see what works and what doesn’t. For me, I want to maintain this bigness to it. There’s an energy to our music that is unique. I’d be lying if I said I didn’t like looking out into the crowd and seeing people sing our songs. That’s a pretty cool feeling.

Tyler: The vibe is definitely “you’re at a concert, you look out, you see a lot of dudes with Busch Light.” (Damon starts laughing) Just let me finish, let me finish. There’s a beautiful spice to it. Then, the moment we’re playing, they go and get a craft beer. It’s definitely a mix of that heavier rock but also keeping the metal. When I joined the band, there were songs that were written, like on Salvation, and we tried my vocals on it. Those songs weren’t written for me. It was one of those things where the way Damon and Mike started writing was, “OK, we’re going to write to Tyler now.” Obviously, What Defines You – we all love that album – the newer stuff that we’re writing, I think, showcases what we were trying to do with What Defines You. We’ve done enough experimenting to know the direction we want to go.

“The premise? Honestly, to be a better version of yourself. … You can look back and be like, “OK, I’ve done some really cool things. I’ve impacted my surroundings in a way that hopefully inspires other people to do the same.”

Michael: What we did on What Defines You is no secret in that it was different than the albums we’d done previously. Damon and I grew up in an older era than when Tyler did, so we went back to things we truly enjoyed listening to. The things we’ve done on this album, so far, have been different than what we did on previous albums as far as writing goes. I think it’s a good thing.

We’ve butted heads on these songs already, making sure they’re going to be the best that they can for this album. This is our sophomore album on our label, so we’re making sure this can be the best music we can write as a band together and go tour and make a big album. At the end of the day, that’s the goal of this band: to write the best music that we can at the time that we’re in.

You guys are based in Michigan, right?
Tyler: Yes.

Detroit area?
Michael: No. Mid-Michigan. Lansing. If it makes us sound cooler or harder that we’re from Detroit like a lot of bands do… (laughs).

I have to ask you guys: What does “Of Virtue” represent in the namesake?
Damon: The premise? Honestly, to be a better version of yourself. It’s one of those where life, as a whole, is a journey. It’s taking the steps to becoming a better person, being better at your craft, putting out positive energy into the world so that, if it comes back, cool. If it doesn’t, at least you can live with yourself. You can look back and be like, “OK, I’ve done some really cool things. I’ve impacted my surroundings in a way that hopefully inspires other people to do the same.” That’s the general message in our music. Not every situation is going to be positive, but you can take something from it and use it in a way to put your best foot forward. Outside of that, the name sounds cool, so… (laughs).

Before we part ways, what are some of the things outside of music you guys enjoy?
Tyler: Mike’s a huge hockey fan.

Damon: Hold on, this is completely unprompted. I need all of the good energy for the Los Angeles Lakers in Game 5! (Editor’s Note: The Lakers went on to win the NBA Finals.)

A Lakers fan in Pistons country?
Damon: No, I’m a Lebron fan. The Pistons are hot garbage (laughs). I’m disappointed in them. It’s hard to watch the games. I still watch them anyway. It sucks. It hurts. We all like sports. Mike likes hockey: Red Wings. Terrible. (Tyler) likes the Tigers. Trash.

Tyler: No, I like Oregon Ducks football. Not trash.

Michael: I’m a Red Wings fan. I’m loyal to my state, but I also have other teams that I like. I’m a Dallas Cowboys fan, as well.

(It) has been a rough year for everyone. In the music industry, 2020 has been a year that has heavily affected artists as they are not able to tour. For fans who are able, what are some of the ways they can show their support during this time?
Michael: Merchandise, for sure. We’re clearing out all of our old merch right now. Merch is definitely the biggest thing, whether you’re at home or on tour. Merch is always the moneymaker for bands. Definitely since we’re not out touring, it’s a little harder.

Damon: Like he said, merch. Honestly, just going about your regular business. Stream the album, buy the CDs, and buy the merch. We’d done some live stream stuff and some of those places you can donate and help the cause.

Will you be releasing your music on vinyl?
Tyler: Yes, there will be vinyl on SharpTone’s website. Vinyl was already gaining a large market of music buyers, but I almost feel like it’s become particularly a hot selling item during the time of COVID-19.

Why is that?
Tyler: It’s pretty crazy. I can’t tell you how many times I’ve seen where, literally, they haven’t even released a single yet, and there’s always that one person on there: “Is this gonna be on vinyl?” It’s like, No! It’s a single!

Of Virtue was posted on October 23, 2020 for HM Magazine and authored by Andrew Voigt.