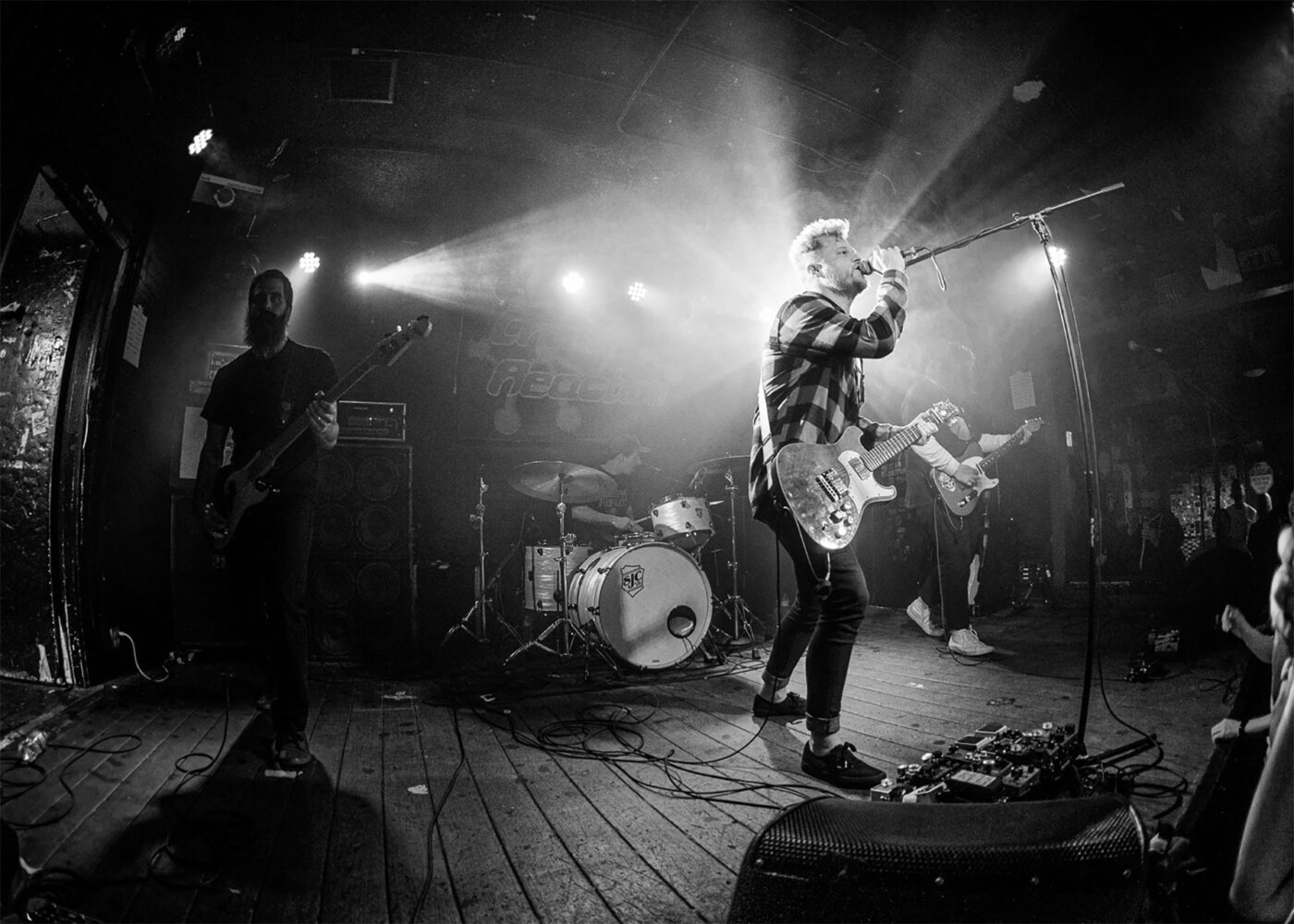 My Epic is an anomaly of art in that, for whatever reason, hasn’t cracked into the mainstream or been lauded among the universal populace. It’s not for lack of quality; they’re critical darlings. Originally formed in Charlotte, North Carolina, My Epic has been playing its brand of indie-alternative/post-hardcore for over a decade now and has built a deserved, small, faithful, cult following in the process. With the members of the band living all around the United States and working various day jobs, My Epic is still making music because they love it, not because they have to in order to pay the bills. Maybe that’s the reason the band’s music translates better as critical success – love. They love what they do, and they do it unmoved by a capitalistic structure. They are the epitome of artists who love to create art and accept what comes in its wake; they are not driven to create success in the hopes it comes from their art.

Their most recent EP, Violence, features a blend of indie-alternative enchantments alongside pseudo-metalcore adrenaline, particularly highlighted on the track “White Noises” featuring Cory Brandan of Norma Jean. The pairing is magical, guitarist and vocalist Aaron Stone’s melodies and Brandon’s cries echoing a yin and yang balance. The song is a masterpiece, so, in true My Epic fashion, they follow it up with Vangelis ambiance on “Spit and Blood,” the two tracks a slightly larger macrocosm of the band’s sangfroid also representative within “White Noises” alone. There is an equilibrium among their contrasts, highlighting the band’s musical range and throwing listeners off their scent.

Their last studio album, Behold, was released in 2013 and they’ve piqued interest with only a handful of EPs since, and it causes a lingering question, a near-demand for new music en masse. Some of them are now fathers and, with full-time work, it’s unreasonable to expect records to be cranked out, and the melee of the global pandemic certainly isn’t helping. Though, as the band lives and works remotely, they’re uniquely set up for the near-term, but with self-admittance, it’s still hard to dig the well and produce fruitful work that means something and is longstanding in its nature.

Drummer Jesse Stone and guitarist Nate Washburn (who joined the band in 2017) were able to take some time to sit down over Zoom and talk about what magic they’re concocting. The backdrop in Stone’s home featured a framed poster on the wall from Facedown Fest (an annual celebration of bands signed to the tried-and-true Facedown Records label that includes alumni and surprise reunions), while Washburn, donned with a Silent Planet shirt and clearly prepped for communication amid life at home, joined us with a microphone in his face that was more suited for a radio broadcaster.

HM contributing writer Andrew Voit talked to Stone and Washburn about how hard it is to release music consistently, the difficult nature to pen meaningful words on a timeline, and how they’re going to get music out in the new normal.

HM: When it comes to My Epic, who are the primary songwriters?
Jesse Stone: Historically, it’s been Aaron (Stone, Jesse’s brother and lead vocalist). It will start with him, and then Jeremiah (Austin, bassist) and I are his first filter. We’re like, “Nah, that’s terrible.” I feel bad because Aaron will spend days and weeks and months crafting ideas and we’ll just hack them to bits. With the advent of Nate, there’s a lot more of Nate’s input. There are even some songs on the last record and some as we’re writing this next record that we start with a song idea that Nate had as opposed to Aaron, which I think has been a breath of fresh air for Aaron. But let’s back up. Pre-Nate, Tanner also shared writing duties too. With Behold, Tanner would write a lot. I don’t know if we necessarily had “songs” that Tanner wrote, but his input was huge.

Nate Washburn: When the band first started, Aaron was the primary writer. I started with the band four years ago. Violence is really the first record where I brought ideas.

“My Epic is not a band where Aaron just sits down and pens a song into completion. He really spends time trying to convey exactly what he wants to say in exactly the way he wants to say it.”

Since Behold in 2013, My Epic has only released EPs rather than full-length albums. What is it about the EP format that appeals to you most?
Jesse: Time (laughs).

Nate: When I started with the band, it was during the release of Viscera, which was the first EP after Behold. I knew those guys since 2010. Fast-forward five years, we don’t see each other, we don’t know each other really, and I’m working at Glow in the Dark Studios in Atlanta. They came to make the Viscera EP and I work there, so that’s when we became reacquainted. At that time, there was this attitude within the band that the grueling nature of writing ten songs and getting it out was just not going to fit in anyone’s life. It just wasn’t going to work.

Jesse: There was a long season where My Epic was the focus and we had part-time jobs to try to make ends meet, to fill in the gaps – which, there were a lot. Behold we wrote with all of us holding a full-time job. That was the first time My Epic had the transition where the band was kind of on the backburner but we were still trying to write a full-on record. That’s when we were just like, “We can’t do this anymore.” We want to give our fan base annual to semi-annual records. We want to get our songs out in a more regular timeframe, so let’s just be really structured about trying to hit an EP every year to year-and-a-half.

We still got behind in our timeline, because it’s hard.

Nate: I think part of it is seeing the weight of finishing lyrics and feeling really satisfied with songs – which was weighing on the band but really just Aaron. Lyrics are a bottleneck for Aaron; he really cares how the lyrics turn out. My Epic is not a band where Aaron just sits down and pens a song into completion. He really spends time trying to convey exactly what he wants to say in exactly the way he wants to say it.

Jesse: It’s not about putting the time in; like, he put a ton of time in. With Aaron, he’ll write pages and pages and doesn’t get excited about it. Then, all of a sudden, it’s like a stream of consciousness, he’ll just hit a paragraph or a verse or sometimes half the song. It just comes when it comes. 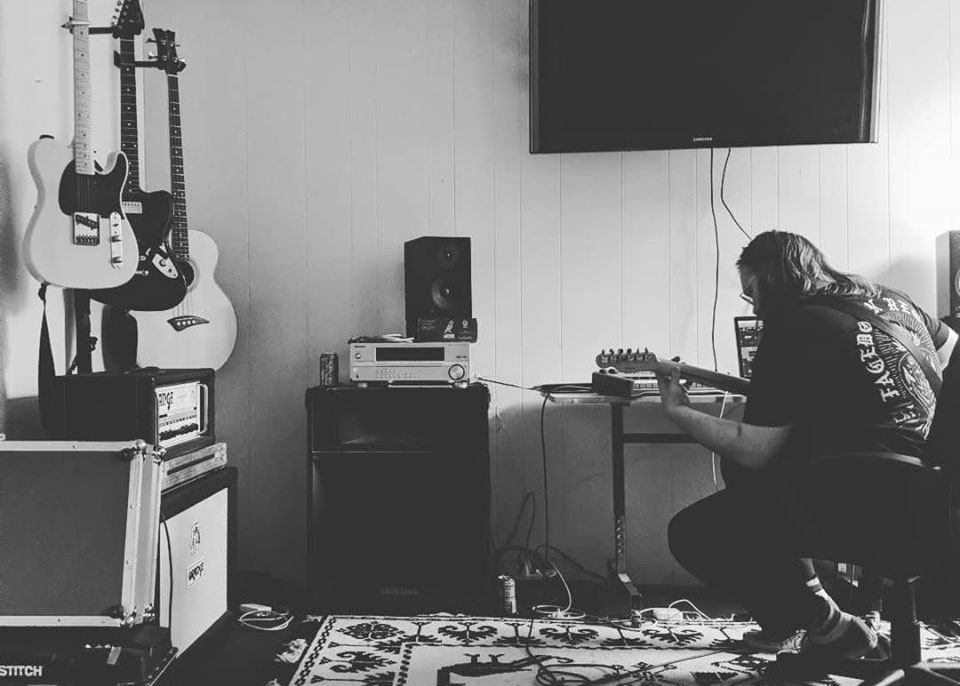 My Epic is signed with Facedown Records, of course. What is the relationship between My Epic and the other bands on the label?
Jesse: There was a season where there was a lot more interaction. Part of that is probably the amount of time we spend on the road. I would say Facedown Fest is kind of the impetus and climax of the Facedown bands getting together once a year. When the Facedown bands get together, it’s always a solid hang and a good camaraderie.

Nate: Because Facedown has always been so grassroots and small and because of Facedown Fest – which is almost every year, getting together – bringing all the bands together to hang out and celebrate and play music, that’s kept that label like very much a family.

Jesse: It’s Jason in Virginia and Dave and Shannon (Quiggle, husband and wife that own and run the record label). They’re the sweetest people ever. Like, literally, the sweetest people, and they’re all super rad. The term “Facedown family” emanates from the people who are on the label. They’re sweethearts who care about people way more than music and they’re super passionate about music, so there’s no way for it to not be ridiculously relational.

The band recently started doing a podcast called Between the Notes. Tell me more about that.
Nate: That kind of gets into the Patreon thing. We have the general podcast, which is for everybody. The idea behind it is that we do interviews with other artists and musicians. We try to focus on stuff that’s not just music because most musicians do other cool things.

You don’t just play music, Nate?
NW: For me, I don’t have anything between the notes. I only do music, because I’m a music producer. I don’t have anything else. I watch TV, play video games (laughs). We launched the podcast and the Patreon all-together; there’s an episode that comes out every other week – that’s the general podcast. Then, on the flipside with the Patreon, there’s a podcast that’s going song-by-song through Yet as part of the ten-year anniversary of that record. That’s, basically, one of the things that the Patreon is about. If you’re into the band, there are all these deep-dives and conversations.

You mentioned new music in the works. When do you plan on releasing your next EP or album?
Nate: We are working on it; there’s a lot happening for the band. We launched a Patreon a couple of months ago, right at the beginning of COVID, which makes a lot of sense for us because we do have a really dedicated fan base. We’ve been putting out content that way. One of the incentives is that fans will get acoustic music. In the meantime, we are working on a full-length record. Right now, the hope is that we will be recording by the end of the year. I’m saying late Summer 2021 is what we’re shooting for.

My Epic was posted on August 16, 2020 for HM Magazine and authored by Andrew Voigt.