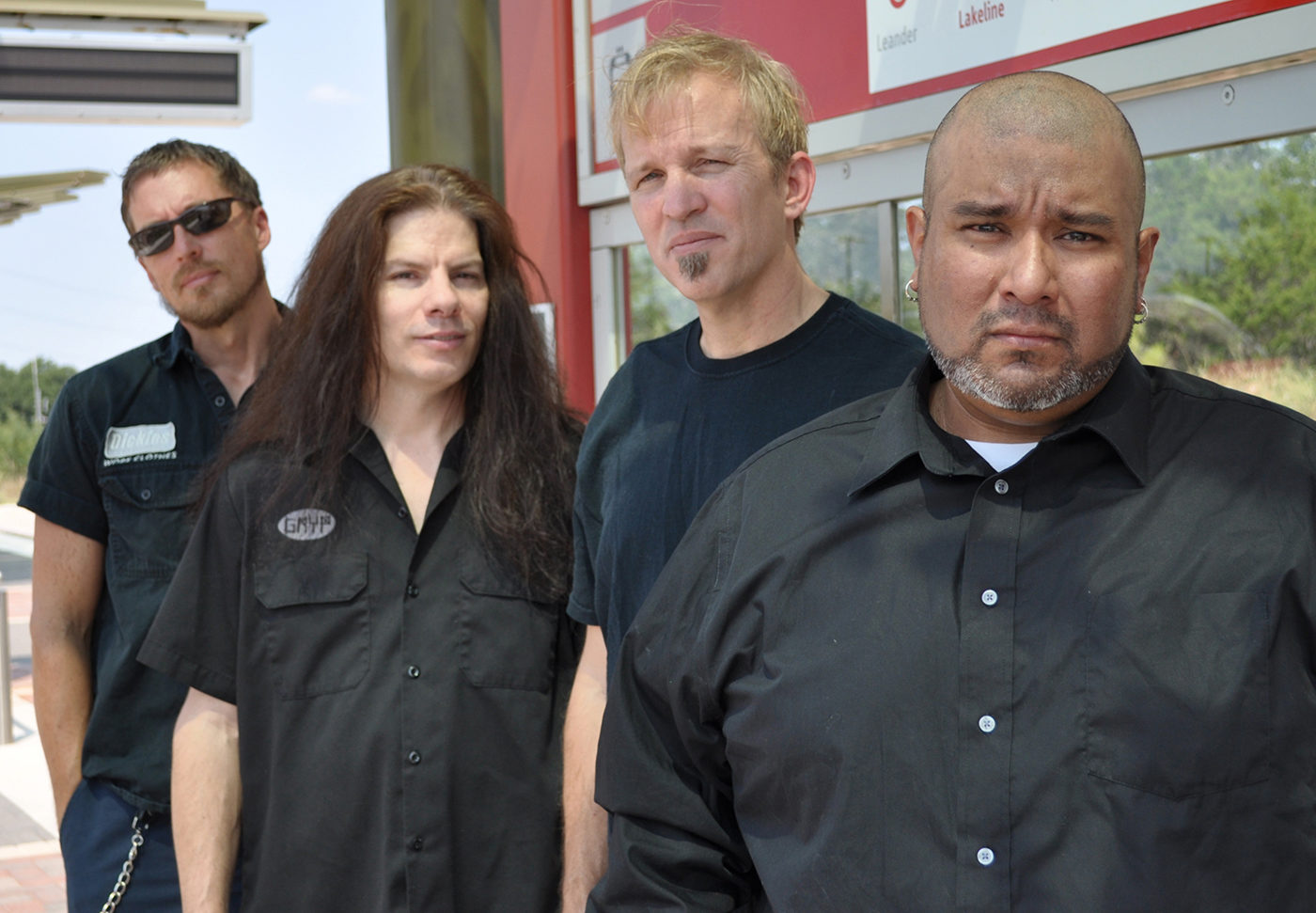 The tiny little masks make a comeback, releasing their most -- dare we say -- mature album to date

“If you’re having a hard time with God, you’re probably doing it right.”

When Lust Control began to take form as a band back in 1988, their material really pushed the envelope in the contemporary Christian music world, and yet, it was well received. The Austin, Texas, band brought something fresh and adventurous to the table, pushing subject matter like sexual sin, abstinence, pornography and masturbation. While these were topics that had been around since sound was pressed to vinyl, it was an oddity to witness a group of masked dudes onstage, throwing down a hard rock, punk-edged sound, while singing about things considered taboo in both the secular and Christian ecosystems.
Delivered with aggression and humor, Lust Control’s songs upset the Christian right while making fans of people who enjoyed their weird breed of chaos. (Remember: This was before Slipknot started wearing masks.) Although HM Magazine named them “The Worst Christian Band of the Decade” for the 1990s, Lust Control had won its audience honestly.

In 1994, after releasing a few albums, Lust Control called it quits. Over the years, vocalist Doug Van Pelt, aka “Gene,” guitarist Mitch Roberts (“Bradford”), bassist John Wilson (“Butch”) and drummer Phil Borrero (“Bob”) remained friends. In 2010, they reconvened and began rehearsing for the 2011 Cornerstone Festival, which ended up being a full success. Riding the buzz from the festival, writing and recording for a new, full-length album seemed to be the natural progression. So the four of them got together, wrote new material and the music was recorded last fall. (Rocky Gray from Living Sacrifice was hired to master and mix the tracks.) The release, Tiny Little Dots, is Lust Control’s most rocking, and (dare we say) their most mature effort to date.

“We’re pretty darn excited about it,” Borrero says. “This one has leanings towards the metal side of some of our early repertoire. But it’s not a migration; it’s a progression, I think, from things in the past. We still want to keep that punk feel, that punk vibe, and a certain rawness to it. We want to keep that alive and move it forward.”

Frontman and founding member Van Pelt adds, “Some of our past is ridiculous and controversial. We have the song ‘The Big M,’ which is about a subject that nobody’s ever brought up. It’s very rare, especially in Christian music. Some people, of course, have pushed us aside or we’ve been censored. This album, I think, is more mature. We’re not purposely trying to be a thorn in anybody’s side, per se, but we’re also speaking the truth boldly and without a lot of reservation.”
Van Pelt culled some of the lyrics for the album’s title track from a case of teenage infatuation he experienced with a Playboy cover girl as a teenager: “That was the first pornography I ever saw. It may not be the actual first magazine; I probably picked up some porno in trash cans before or after. I can’t remember when. But my mom actually bought this copy of Playboy magazine that had Patty McGuire on the cover because it had a Jimmy Carter interview. This was in the fall of ‘76, and it looked like he might be the next President, so she wanted to learn about him. So she actually bought a copy of Playboy, and when she was done reading it, that issue somehow became mine. So that was the reference, and I kind of namedropped her. I said Patty M. in the song.”

“Tiny little dots” refers to the 300 dots-per-inch on photographs. “I used it as an ideal to kind of live up to,” Van Pelt explains. “Photography, magazines and, of course, now with the Internet and its computer monitors – they’re all just tiny little dots, a mirage. It’s a fantasy. It’s not real. It’s pretend. And I always wanted to have a real girlfriend, and not something that was a picture on paper. It was kind of that concept I’ve had for years, since I was younger. So the song kind of plays on, ‘I have a girlfriend, blah blah blah …’ and the song kind of leads you on and reveals later that the girlfriend is a bunch of little dots. It’s a mirage. It’s the rip-off that pornography is.”

Lust Control flicked the dust off of a previously unrecorded song called “Finger” and put it on the new record. Van Pelt explains the importance of the track. “We had a cassette album/demo EP called Feminazi,” he said, “and that had, like, four songs on it, and those kind of showed this direction more – kind of serious, musically. It wasn’t all fun and games, like fun-punk-rock with a joke or punch line with a chorus. We wrote a song called ‘Finger’ back in ‘94 and we played it live at least a few times. When we got back together, that was one of the first songs we wanted to start playing. I brought up the idea of recording it, and we really wanted to give that song its proper justice, because it was a great song – we all thought – and it never got recorded. So that’s the impetus that really got this whole ‘recording an album’ going.”

“Faith Don’t Fail Me Now” conveys a poignant message: “I tried to put myself in someone else’s shoes when I wrote the song,” Van Pelt says. “It’s about a parent’s child who has a disease and, according to the doctors, is going to die before (the child) ever becomes an adult. That’s a tragedy that happens all over the place. I’m not going to name the disease; I’m not going to name anything else, but I imagined the heartache that a parent would have – knowing every moment they see is going to be cut short, dramatically, before they reach the age of 20. And so I’m just trying to put myself in those shoes. I wrote the song purposely with a couple flaws in it. One, it would have no resolution. It’s just kind of a lament, and I tried to capture the raw emotion of when you’re crying out to God. ‘Please. Please, please, please, I’m begging you. Don’t let this happen,’ where the parent is just full-tilt leaning into God. I wanted to capture that raw emotion and not have any resolution to it. Not have the typical Christian happy song that has a nice happy ending, where that child gets healed and everything’s happy. But just this moment of time where they’re crying out to God. … I’ve been through some suffering in the past year and a half, with the divorce and the end of my 20-year marriage covenant. So that was what I drew into when I laid down the tracks in the studio. We’ve only performed it once, and the audience seemed to really think it was personal and kind of believed the performance, too. It’s a real important song for me on the album, and I’m pretty pleased with it so far. Maybe God can use that song to help people. One other thing that has a flaw in it is the phrase for the title, ‘faith don’t fail me now.’ That’s flawed theology. We don’t really have faith in faith, but I was kind of playing on the words ‘feet don’t fail me now.’ I need to run away from this bear that’s chasing me. Feet don’t fail me now.”
Wilson added his perspective to the same song: “That component of lacking a resolution in the song, I think, is magical in a way because it conveys desperation without having to have a neat, tidy conclusion to it. It really conveys humanity and how fragile our humanity is and how we’re utterly reliant on God. Maybe that’s why the night we played it at a recent concert, I think it was two or three people went out of their way to tell me that was the one that got to them the most. I think it’s because it’s honest, and stylistically it’s not, you know, full-throttle metal or punk. But in an emotional way, it’s a barn-burner.”

“Make Money and Die,” the fast, souped-up, hard-driving rocker, is the first single off the album. Van Pelt got the song from a crony who helped produce the new album.

“My old friend, Paul Q-Pek, who started the band with me, we asked him to kind of be a producer for us on this album, just to have a second set of ears there, to give us some production help,” he said. “He did some pre-production with us and listened to our songs and made a couple suggestions. But this is a song he brought to the table. I asked him about producing; he brought about four or five songs to the table. And he said, ‘This one’s a hit.’ He wrote the music and he wrote the lyrics for it. He didn’t write any music and show us any chord charts.”

Tiny Little Dots is guitar-heavy and well-produced. The songwriting and honesty really shine throughout the track listing. “It wasn’t as contrived as past efforts,” Van Pelt admits, “where we had this serious ministry where we were addressing sexual sins from a biblical viewpoint. It wasn’t necessarily that we were trying to make all the songs fit into that ministry imprint of who we were. ‘Fire Ants’ was just kind of a goofball song. These are songs that came as a result of us getting together and being creative. All four of us have remained friends. Each of these four guys are solid guys that have something they can share with people that will bear fruit because God is at work in their lives. God has brought them those things, and God’s been their anchor. So, because all of us have that common faith, it’s going to come out in the art we make, whether we try to repress it or purposely express it or not. So this is kind of natural in a sense, at least it felt that way for me. It wasn’t so much where there was a big strategy. A lot of the songs didn’t have a pre-conceived concept or a notion when they were being written. It’s kind of a natural expression of who we are, and we all have been captivated by Jesus and (His) love that has changed our lives. Each of us has a story about how that’s happened in our life. It’s really awesome to be friends with these guys, and to make music with them is just a blast.”

“It’s just kind of a collaboration of tunes without much forethought as far as making a singular statement,” Roberts said. “’There Go I.’ You look around and judge people at how failed they are and how foolish and how stupid they are, but there I can go, too. I can do stupid and foolish things as well, even after being a believer for 30 years. So it goes from the more deep and meaningful thing, obviously, to much more levity.”

Wilson concluded, “I agree we didn’t necessarily have a particular point with the album going in. But I hope it comes through that a relationship with God is totally possible, yet very hard to accomplish outside of obedience. If you’re having a hard time with God, you’re probably doing it right.”

Lust Control was posted on November 6, 2013 for HM Magazine and authored by Charlie Steffens.