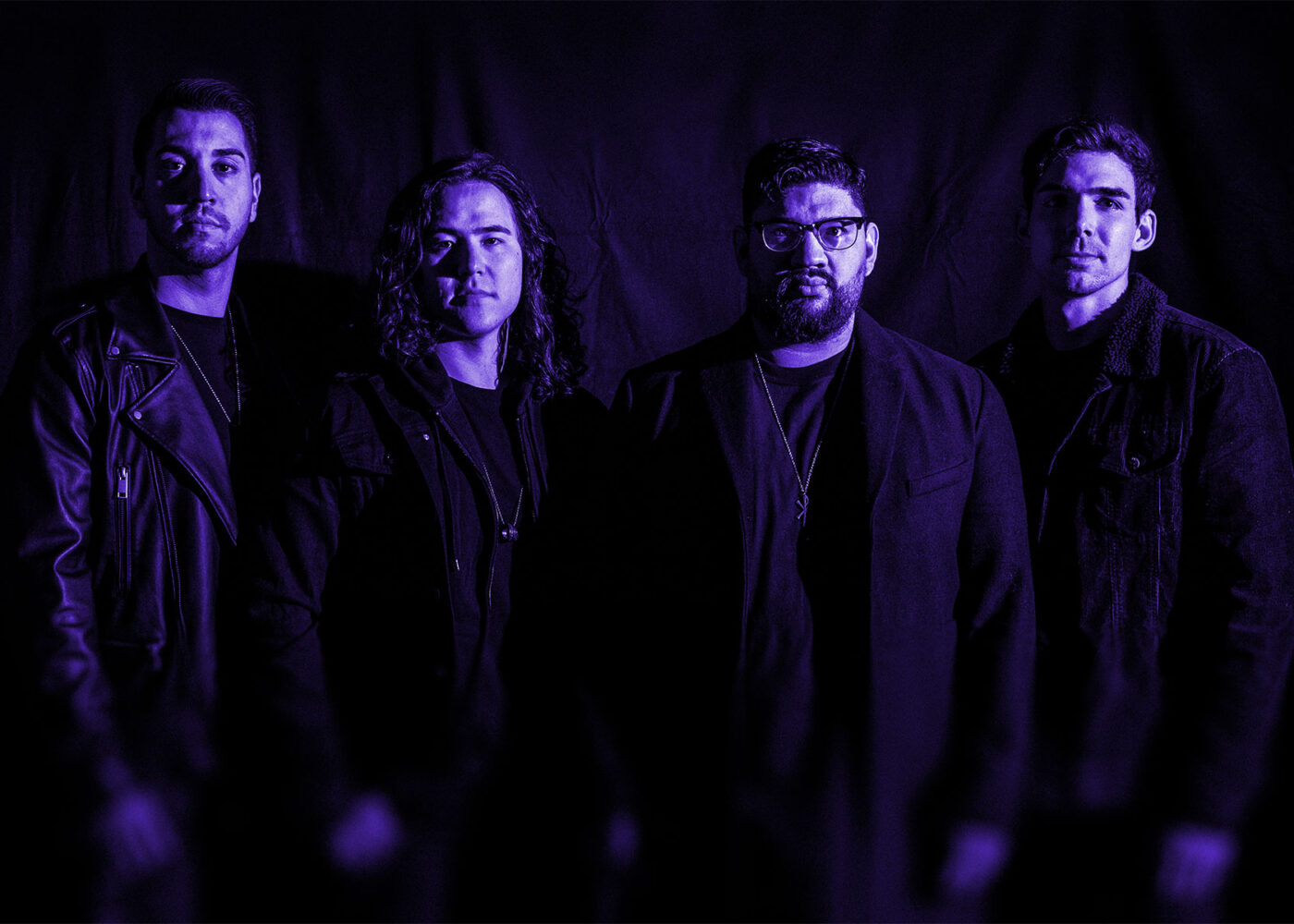 The Spirit of Light

Metal is a world where self-exploration thrives, and there are a number of bands that see it as a palette that paints with the eternal human spirit of curiosity, contemplation, and confidence. It welcomes both darkness and light. Welcome, Lightworker.

Metal is a profound environment to examine the absolutes of white, black, and the grey in-between. Maybe it’s just me, but I often find metal, in all of its forms, to be a room where it’s safe to ask – quite literally – any question; because of its open nature, the environment begats a world where investment in self-reflection sees returns. Though there is religious rebellion prevalent in the genre – especially in its genesis – there are a still number of bands that see it for one aspect of what it can be: a beautiful palette that paints with the eternal human spirit of curiosity, contemplation, and confidence. Welcome, both darkness and light. Welcome, Lightworker.

When I met with Joe Calderon, it was just three days after his band, Lightworker, had released Fury by Failure. It means he’s probably been sleeping too little and celebrating quite a lot, but it also means he’s been interacting with the fans of his band as much as possible. Calderon and his band are from San Francisco, quite possibly another one of the best environments for self-exploration, and, as he gauges the responses of the crowd, he embraces the reflection the genre of his band allows and the responses he’s received in the early days of the band’s first steps.

Fury by Failure is a roaring, headbanger of a record sure to please fans of metalcore in a raw, pure, powerful form. The guitars rage in beautiful fury, the vocals are reverberating like Underoath-meets-Soundgarden, and the album artwork is incredible. When I first listened to the music, it hit me like I had just tried to run through a brick wall. It’s not a timid entrance into the scene, but, as the scene features the full spectrum of noise and ideology, it’s a welcoming home for the band.

You guys just released your first full-length studio album called Fury by Failure. How do you feel it’s been received by fans since the release?
I’ve been so humbled; I’m beside myself in the best way. I keep getting messages from random folks who I’ve never met before telling me how much they enjoy it. It’s really a dream come true. It’s also very encouraging because, when you’re in the studio and writing stuff, there are some times where you make decisions – whether it be lyrics or the actual music itself – where you’re like, man, I don’t know if this is going to go over well. Having this response has just been incredible, and I feel so blessed. We’re so excited to play out once this whole COVID-19 thing is over. We’re also excited to write a new record where we definitely put a lot of fuel in the tank.

What inspired the album and which members of the band were involved in the writing process?
So, Grayson (Hurd, guitarist) and I are the primary songwriters. We both write the music. I write about 90% of the lyrics. In terms of lyrical content, it’s really about the observations of life through my lens and the things that I go through. I’d like to try from a more fictional point of view in the future. We’ll see. There are some guys who are great at it. Like, Schuyler from He Is Legend is so good at making up these short stories, and they’re very intricate and they’re cool. But, for me, it’s definitely based on real life and the things that have happened to me or others.

What are some of your artistic influences?
Speaking for me individually, I’m a little bit more of the oddball of the group. I do love a lot of the metal stuff. I’m really a big fan of Extol and a lot more European stuff, although I do love bands like Killswitch Engage. I’m really into post-rock; Caspian is one of my all-time favorite bands. Cinematic score stuff. I love a lot of soul and R&B, like James Brown and Al Green – not Chris Brown (laughs). I’m also into punk-tinged rock-and-roll like Gaslight Anthem and stuff like that. It’s a pretty eclectic taste. Our drummer is really into a lot of R&B stuff.

How did you guys decide on doing metal then?
See, that’s the thing: It’s just so much fun. And he still likes heavy music. I just showed him the new Bleed from Within record and he was like, “Dude, that rules!” The other guys, I would say they’re a little bit more into the (rest in peace) Warped Tour metal, like We Came as Romans, Wage War kind of stuff. It ends up being like this… I was gonna say mosh pit, (but) not mosh pit. Melting pot (laughs). See? I’m getting flashbacks, man. I need to get on stage.

I’m going to use the phrase “mosh pit” instead of “melting pot” moving forward. I have to ask this question: what does “Lightworker” mean?
It doesn’t mean what everyone thinks it means.

I don’t know what it means, so I’m all ears.
We know there’s this New Age thing behind it, but we’re not associated with that at all. For us, it was just as simple as… You know, my influences come from trying to have positivity within a dark place, like singers such as Jesse (Leach, vocalist) from Killswitch Engage, who definitely talk about the struggle life can be.

Everybody’s had their trials, but I have, like, this… I don’t know if it’s a gift or what you’d call it, but I have this ability to see the silver lining in every situation. That’s what’s pulled me out of a lot of bad situations, a lot of dark thoughts. That’s what we want the music to be: to be something that’s working in the darkness to make light. It’s as simple as that. 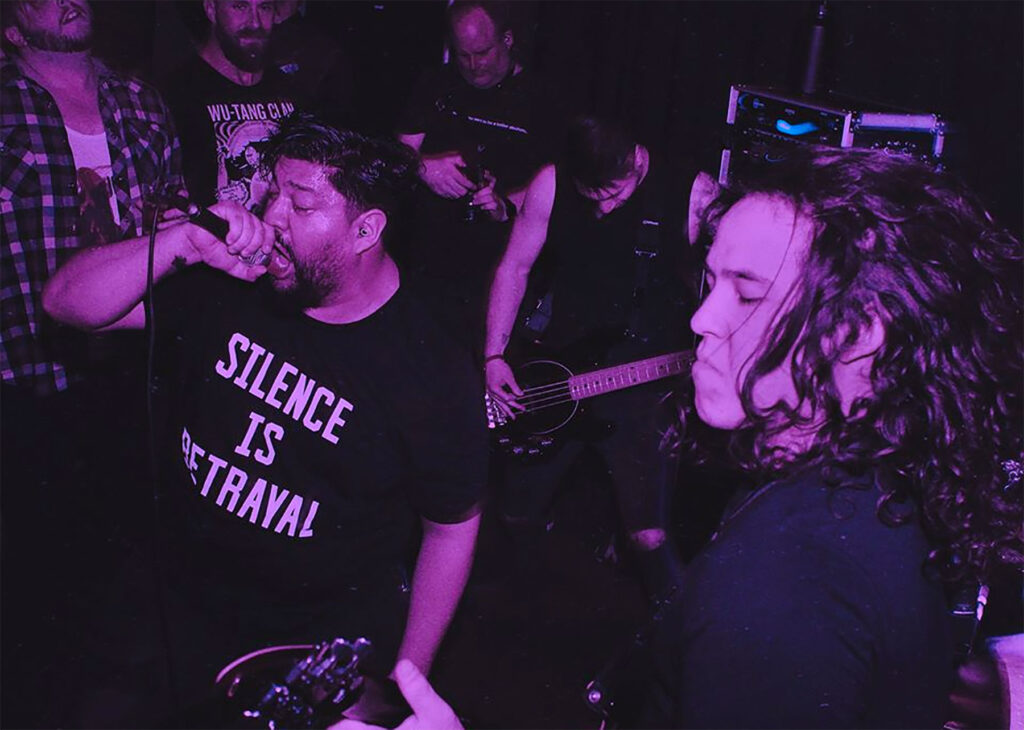 With your release of the new record during a pandemic, how do you think that affects you guys? You were probably originally thinking, “Hey, we’re going on tour after we release this thing!” Then quarantine arrived. How did that change how the band went about marketing the album and preparing for its release?
We were definitely working on some tours. We actually had a show that we played right before quarantine hit. It was a fantastic show; it was really intimate. The room was probably like 70 capacity (if that), but it was packed. A lot of friends came out. A lot of new faces came out. I remember having such a great time. All of us were standing outside of the venue talking about the future and were like, “Alright, this is what we’re gonna do, blah, blah, blah…” Then, about a week and a half later, boom.

Everything was derailed. For the first few weeks, we didn’t know what to expect. After that, we decided to become proactive and were just like, OK, we don’t know if we’re gonna hit the road or not. We decided to allocate different resources to bring the show to people, and that’s something we’re working on. It will take some time, but we’re thinking of different ideas and we’re not going to let it stop us. We’re going to try to adjust and keep moving forward.

Hopefully, next year, we’ll be able to go out on the road and do the traditional mosh pit! Go out there, climb on stuff, meet new people, and hang. There are a lot of people that, even before the record dropped, have just been super supportive and who I really want to meet and really want to hang out with and our band wants to hang out with.

Your label, Solid State Records, tends to have a draw towards bands with a spiritual undertone. How does spirituality play into Lightworker’s music?
I would say that it plays into the individual rather than the band. I, myself, am a Christian and the other guys aren’t, but they’ve also given me a lot of leeway and understanding to write what I feel and what I need to get out there. So, we’re definitely not a Christian band, but I just happen to be a dude who believes, so some of the lyrics come from that perspective. The main objective is to just hang out, have a good time, and write some great music.

Have you met some of your labelmates on Solid State?
Yes, we’re actually friends with some of them, even prior to this. We worked with Daniel (Gailey) who is part of Phinehas and Fit for a King. He was the guy who produced all of the instruments. Some of the Norma Jean guys and some of the Silent Planet guys I know from way back. It’s almost as if they’ve let us into the club now (laughs).

What is the best way that fans can support Lightworker?
Bands and artists are hurting during this time, some more than others, due to not being able to tour. For us, it would actually be following us on Spotify, Instagram, Apple Music. We do have some merch that coincides with the new record. We also have 500 copies on vinyl of the new record. What’s cool is that each of the vinyl comes with an extended liner note section where Grayson and I each wrote a short summary of each song and how they came to be, tackling fun facts, lyrics, etc. It’s exclusive only to vinyl. I would definitely say streaming the record and spreading the word to your friends and family – even your grandma if she likes heavy stuff. Also, feel free to comment on our social media. We say hi! We love interacting with people.

Lightworker was posted on July 8, 2020 for HM Magazine and authored by Andrew Voigt.