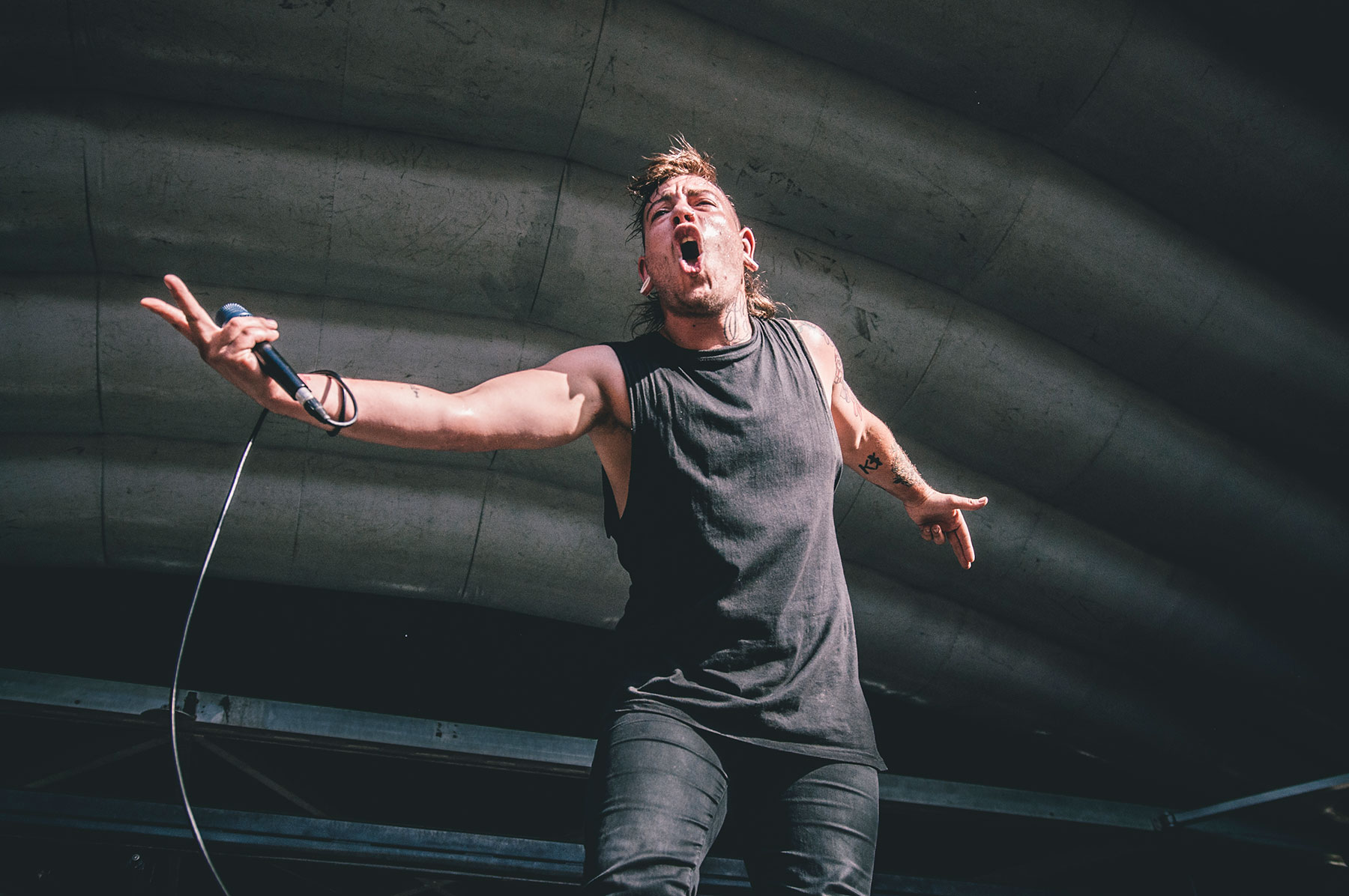 For All Those Sleeping

For the Love of the Journey

Caught in the middle of Warped Tour tsunami, the band’s guitarist David Volgman-Stevens talks about whats went into making this record, their true feelings about the industry they inhabit and how he doesn’t remember his birthday.

With the release of their third album, Incomplete Me, now under their belt, post-hardcore band For All Those Sleeping is winning over fans every day this summer. Their blend of melodic and mosh makes them their music accessible for any noob, while the maturity and depth will have their seasoned listeners coming back for more. Caught in the middle of Warped Tour tsunami, the band’s guitarist, David Volgman-Stevens, talks about whats went into making this record, their true feelings about the industry they inhabit and how he doesn’t remember his birthday.

What city are you in?
We are in Sacramento. Well, it’s right outside of Sacramento, but technically Sacramento, California.

Do you like it? I know (the tour) didn’t go to L.A.
Yeah, I love it. It never plays in L.A. It always plays right outside of it. We did all that. I love it up here a little more weather-wise. Well, actually, it’s a toss-up. It’s kind of hot here sometimes. Our managers are here. They’re from Sacramento, so we’re hanging with them. We got some good friends. The show should be great. We play a little later, so we’re just waiting to play.

Since you’re waiting to play, what’s the build-up like?
It all depends because every day is different. We have to head out to a signing we have in 10 minutes. We have press right after that. I was meeting some fans earlier. I like to try to go out early and talk to some of the kids that come out to see us. Trying to stay busy, and then we play. Every day is a little different, but it’s the same thing, so it just depends on the order pretty much.

Congrats for having a third album under your belt. That’s amazing. How does it feel?
Thank you. It’s feels great, a relief to get it out there. We’re excited now just to be playing the new material. Been waiting a while to be able to do it. It’s a great new chapter for us. We’re really proud of the record. It’s the best thing we’ve done. We’re excited to see where it takes us this year.

With the new record, how would a new listener describe the new album?
(Laughs) I hate these questions, because I’m bad at answering them.

I’m sorry!
No, it’s fine! I guess it’s just a representation of who we are right now in our lives. It’s very raw. We didn’t try to hide anything. I think the biggest difference is the music has matured a lot; we’ve grown as musicians. The subject matter has really matured.

I already had a question about (your) approach to this album, so I guess you’re different approach would be that you were writing for you.
Yeah, we were writing what we wanted and didn’t think about anyone else. Just wrote music and art that we cared about.

Did you guys do anything different technically? Did you work with a different producer?
Nope. It’s actually the same guy we did pre-production with and the same producer as our last record. We just took a completely different approach in the writing process, and we did different stuff in the studio to make it feel more real and more raw in general.

Which song off this album would you play for someone who has just recently gotten into the metal scene? What would be your “You have to listen to this song”?
Ooh, in the metal scene, huh? It’s always hard to tell, I guess, with these people who really dissect the genres. I’m not good at that. But I guess if we’re saying metal, I think “Crosses” is a good intro for it. It’s heavy and it’s raw, emotional, but it’s also very catchy.

Going back to Warped Tour, any crazy stories yet? Any crazy fans? You guys have been there for a while now, there’s got to be something.
It’s kind of crazy every day, but nothing too bizarre. I had my birthday in Vegas the other day, which got pretty crazy. We’re shooting the video right now, or we just kind of wrapped it up, but we were shooting video for one of the songs called “Poison Party.” I just saw some of that for the first time a couple nights ago. It showed that night at Vegas and I do not remember a lot of that. It’s not one of my finer moments. I’m not excited for Mom to see that one, but it’s pure fun and that’s probably as crazy as it got with that.

There’s not so much crazy fans as just really dedicated fans. We’ve been seeing amazing artwork. Lots of crazy tattoos from our lyrics and stuff in the new record. It’s been really, really gratifying. It’s been just an incredible experience so far.

I heard that Ethan used to deliver Avon products door to door. You guys have some sort of beauty routine going on, or no?
Oh, no. I think he only did that for like a day when we he was younger. … We are the least beautified band. We just get by. We try to look nice enough so that no one hates us or thinks we’re disgusting. But otherwise we don’t really try too hard.

(Laughs) You guys are so busy right now, what do you like to do with your time off?
We got a little break coming up after Warped and I’m excited for football season to start. Some of us are really into fantasy football, so I’m really pumped for that. Otherwise, it’s different for all of us. For me, I’m really looking forward to working out again. I don’t get to do it on Warped. I slack and I eat. There’s amazing food every day so I just pig out. As I said we’re pretty normal guys. There’s nothing too crazy about us.

Is there anything about being in this business that you will never get used to?
Yeah. I hate it. We hate the industry, so that’s the first thing. We write a lot about it on the record, which we’re really proud of, actually sticking up for ourselves. It’s petty, and it’s a popularity contest. There’s not enough people that really care about the music as much as they do the money or things like that. I’ll never get used to that and I’ll never like it, but it is what it is. When you grow up and your dream is to be in a band and tour and then you get there? We love it, we’re in it for the music, but if we didn’t care about the music, we wouldn’t be doing this still. We despise the industry.

How do you make it work, then? Doing something that you love so much, yet in an industry that you despise?
We just suck it up a lot. We remember that we get to write music and play music at the end of the day. That’s what it’s about for us. As long as we can do that, we’re alright for now. The thing is to do it for the music and not the business side of it. We just got to keep telling ourselves that.

Take me back to your first EP release in 2008. How do you feel today in comparison to how you felt with your first EP or album?
I’d like to think we’ve progressed a lot. Obviously, I’m really proud of our new record. The EP, that was us just coming together and writing music. We didn’t really know what we were doing.

I always look back on that as a cool time for us. We were just discovering ourselves. That was an experimental, fun time trying to figure out who we were. It’s changed a lot, but I’ll always be proud of that time. It’s cool to see things start to develop and grow. Definitely the beginning of the process. Not the best, but definitely good memories.

Is there any advice you would give to yourself back then?
There’s a lot of things I would do, probably. I would probably make us not rush into things.

Not rushing?
Rush. We signed our first contract and then we went right into touring and all this stuff. I would have taken my time, gotten ready.
Also, one thing: really enjoy the moment you’re in. I remember getting started. It’s never easy when you start touring, and you don’t have tons of money. Just enjoy those moments, because those are some of the best ones, too. Probably the best.

What’s it like being on tour with so many different bands?
This tour is not like any other tour. Touring in general is fun. You usually tour with a group of three -to-five bands. You get to know each other really well. On this tour, it’s kind of a crash course in so many different people. We built a lot of friends on this tour from, tours we’ve done before. We’re making a lot more, too.

It’s nuts. Every night, everyone is hanging out. There are barbecues every other night. It’s kind of like high school all over again. I don’t know if anyone’s ever had that. You move to a school. I know I had to do that and just meet tons of people.
It makes you step up your social game. I like people, don’t get me wrong, but I don’t go out of my way usually to try to make friends and stuff like that. It’s been really rad.

What if you had a normal job, normal life? What would you be doing if you weren’t on tour making music?
To be honest, first off, I would probably be doing music of some sort. I really love country music. I think I would maybe try to do that.

Oh, yeah?
Yeah. Oh, yeah. But otherwise, I just like writing. That’s my thing. As long as I get to write, I’m happy. I would probably be doing some sort of job in journalism or (writing) a screenplay. I really like that. I’m really fascinated by movies and writing films and screenplays. Something where I get to write and be creative, I guess. That would be my main thing.

For All Those Sleeping was posted on July 26, 2014 for HM Magazine and authored by David Stagg.