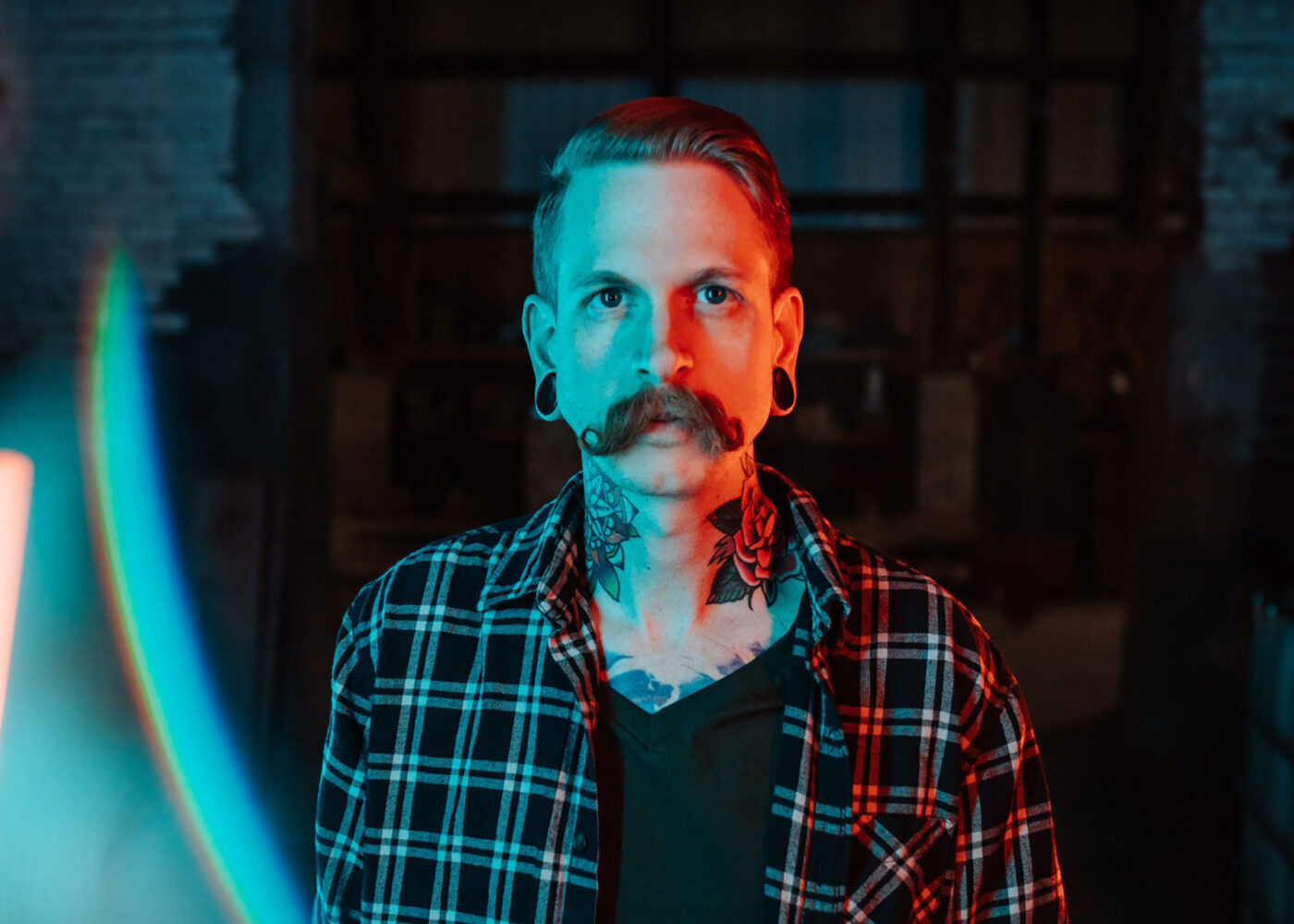 When I first heard about the band Earth Groans, my mind instantly went to the Scriptures where a similar reference is made in Romans 8:22: “…creation has been groaning as in the pains of childbirth.” Not only a cool name for a band does it make, but it’s eerily suitable for the world in which we live. The earth has been groaning in pain a lot in the year 2020, where the result of a worldwide pandemic, social unrest, and political drama have colored our screens and conversations. Our world – more importantly, the people in our world – is hurting greatly, torn apart daily by tragedy and heartache.

Jeremy Schaeffer, the vocalist of Earth Groans, is a bright light in the midst of a dark world. He is the kind heart in a world in need of kind hearts, a Kingdom-minded poet where voices of peace are sparse. He may scream from the rooftops, but, at heart, he’s a gentle spirit with hope emanating from his life’s work. (He is also a metal fashion icon, apparently. For fans of the band, there’s no way to think about Schaeffer without also thinking about his impeccable handlebar mustache. He has perfected its art, and it’s bordering on iconic status.) The band is relentless in their oxymoronic screaming-of-positivity, punchy, solid metalcore with an everlasting hope underneath. It’s an audio adrenaline rush. When Schaeffer and I connected, he was tuning in from his personal recording studio; the first moment he came on, there it was: the mustache. (I can’t help but assume he would have been in a barbershop quartet if he lived in the 1880s.) We dove into art as a means of mental health exercise, the love-hate relationship that comes with being an artist on Spotify, and how every song he’s ever written is a compass pointing towards one specific thing.

That’s wild! What state do you live in?
South Dakota. Most people think that we’re from North Dakota. It’s the Midwest, so pretty much it’s all the same.

On your Instagram account, you share a lot of your own custom artwork that looks a lot like tattoos. Do you do designs for tattoo artists or shops?
No, I’m just heavily involved in tattoo culture. I love tattoo culture all the way around. I’m very covered, myself. I think that’s what got me inspired to start painting this stuff. I would watch the tattoo artists, and I really loved the art that goes into it.

My parents were both painters. The drawing doesn’t necessarily come naturally to me but the painting does. It’s been a fun hobby for me and, this year, because of COVID, my business is super slow. Obviously, we’re not touring, so I’ve had a lot of extra time. For mental health and just to do something fun, I’ve been doing it quite a bit this year. I’ve actually been putting them up online to sell, which has been really nice because that’s helped me pay my bills since I’m not making nearly what I’d be making from my studio this year.

My faith is one of the most important things to me in my life. When it comes to writing and music, these are the gifts God has given me and that’s what I want to use to further the Kingdom and return those things back to God.

You own your own studio, so do you self-record everything for Earth Groans?
Yeah, thus far. That could change; maybe it won’t. I mean, we’re a pretty small band on the label, so we don’t get a ton for the budget. So yeah, thus far I’ve done everything. But that might change. I don’t know. We’ll just see how things progress.

Your standard release format has been as an EP. Is that intentional?
Yes, that was a thing we wanted to do from the start. We want to be an EP band. We want to be able to pretty much release every year, and that way we can keep putting out content. These days, it’s not so much about being a band and having albums, it’s about staying relevant and keeping the buzz flowing. It’s strategic, keeping up with the Spotify algorithms. Even attention spans are shorter.

These days, sometimes it’s hard for me to listen to a whole full-length in one sitting. All these different small things come into play, and we brought that idea to the record label and they really liked it. Essentially, we wanted to do four EPs and end our contract with a full-length; but with COVID messing everything up, I feel like we should release another EP next year when touring picks up again.

I’ve been making the best of this quarantine. I’ve been very busy writing. I have eight songs written right now, and then we’ll pick the best five out of that. Honestly, nobody really knows. We’re feeling things out, so we’ll see what things are like in January. 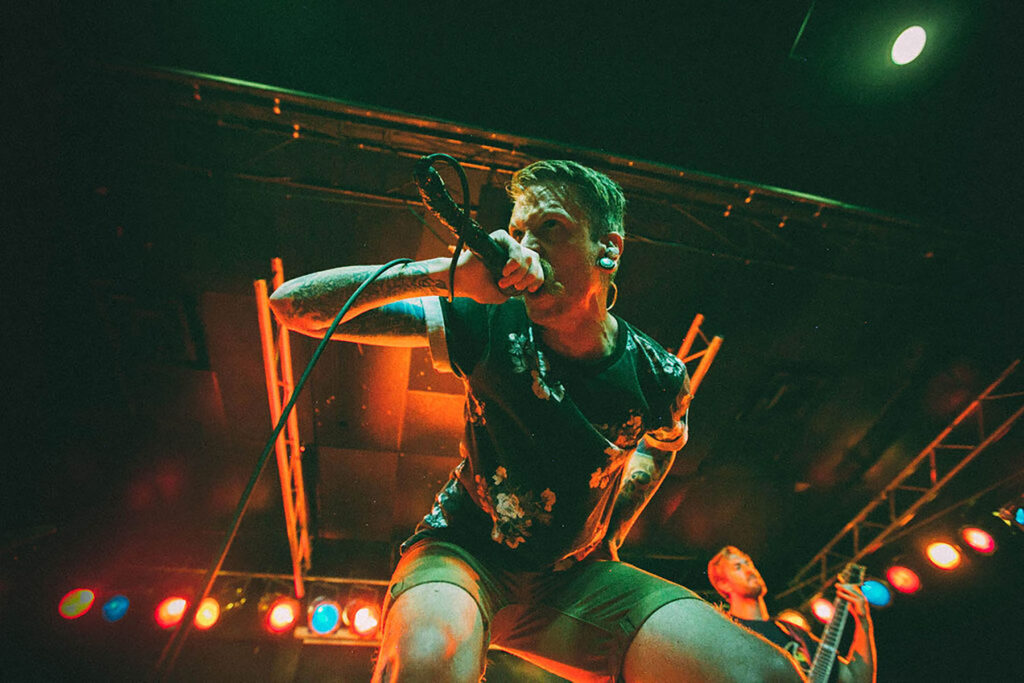 Your most recent EP, Waste, was released in October of this year. How do you feel the record has been received by your fans?
Honestly, pretty good. It’s hard because we’re not touring so we only see what people say on the internet. We haven’t seen a whole lot of hate, but there are always some guys who are like, “Nothing new! Heard this ten years ago!” The only way we can judge how it’s doing is by looking at Spotify numbers, which I hate to do. It feels pretty crappy to release two EPs without playing a single show on either one of them (laughs). I think that’s where we’ll see how people are really responding to the music.

As a songwriter, what bands and artists have influenced you in your music?
There are a lot. As I grow and change, different bands inspire me in different ways. But, going back to the roots, I grew up in the early 2000s metalcore scene, so like The Chariot and Norma Jean. Pretty much anything from Solid State (or) Facedown were most of my favorite bands. Just about any band signed to either label. But to be a little more specific, Norma Jean, The Chariot, and Underoath.

Underoath was probably the most inspirational band out of all of them. Even though every single record sounds completely different from one another, I think it is really cool they can do that many genres and do it really well. I’ve never heard a song from Underoath and been like, yeah, we need to skip this one. As Cities Burn is the same way. Every single one of their records sounds totally different from each other.

Your faith is very important to you. In what way does it play into your life and the band?
That is a very large part of everything I do. My faith is one of the most important things to me in my life. When it comes to writing and music, these are the gifts God has given me and that’s what I want to use to further the Kingdom and return those things back to God. He’s really given me a heart for the hardcore/metalcore industry and the fanbase because I grew up in that (fanbase).

I see that a lot of it is made up of the rejects and outcasts; a lot of them have been rejected by the Church. I can’t tell you how many people have told me that, because of their tattoos, how they dress, and even the music they listen to, they’ve been rejected and they have a bad taste in their mouth. That is where I feel called to go and be the light of Christ and hopefully show people what Christ is like and not necessarily what the “bad apples” are like. When I’m writing music, pretty much every single one of my songs is written in a way that I want to point people towards God, whether it be some positive moral message or an all-out praise song.

2020 has been a difficult year. What has God taught you during this time?
I’ve pretty much lost the majority of my work. It seems like my whole calling has almost been ripped out from beneath me. My job, money, all that stuff has been taken away, in a sense. God has shown up and made money come in from different places. I need to trust in God and He’s going to take care of me and this industry.

I would say that relying on God and letting Him show up… I mean, I have no control over this year. I’m always a planner. When it comes to the band, everything is strategic. I’m always booking out, like, six months to figure out our next tours. I have no plan, so I feel like I’ve lost all sense of control. And that’s kind of good, because when you become a control freak, sometimes you become your own god. This is an opportunity to let God be God. In America, it’s really hard to be dependent on God. We’re told from a young age that we can be our own gods. We can have all the money, all the food. We can have a phone.

A lot of bands and artists in the industry have been negatively affected by COVID and being unable to tour. For fans of your music, what is the best way we can support you guys?
We don’t make any money off of Spotify; we never will. It’s not even a cent per stream, and that pretty much all goes to our label anyway. Spotify is good for numbers, but when it comes to actually paying our bills, merch is literally the only place we make money. When we’re touring, the door money, that goes straight to the gas tank. That’s the only place where nobody else has their hands in our pockets: definitely merchandise.

Earth Groans was posted on December 14, 2020 for HM Magazine and authored by Andrew Voigt.