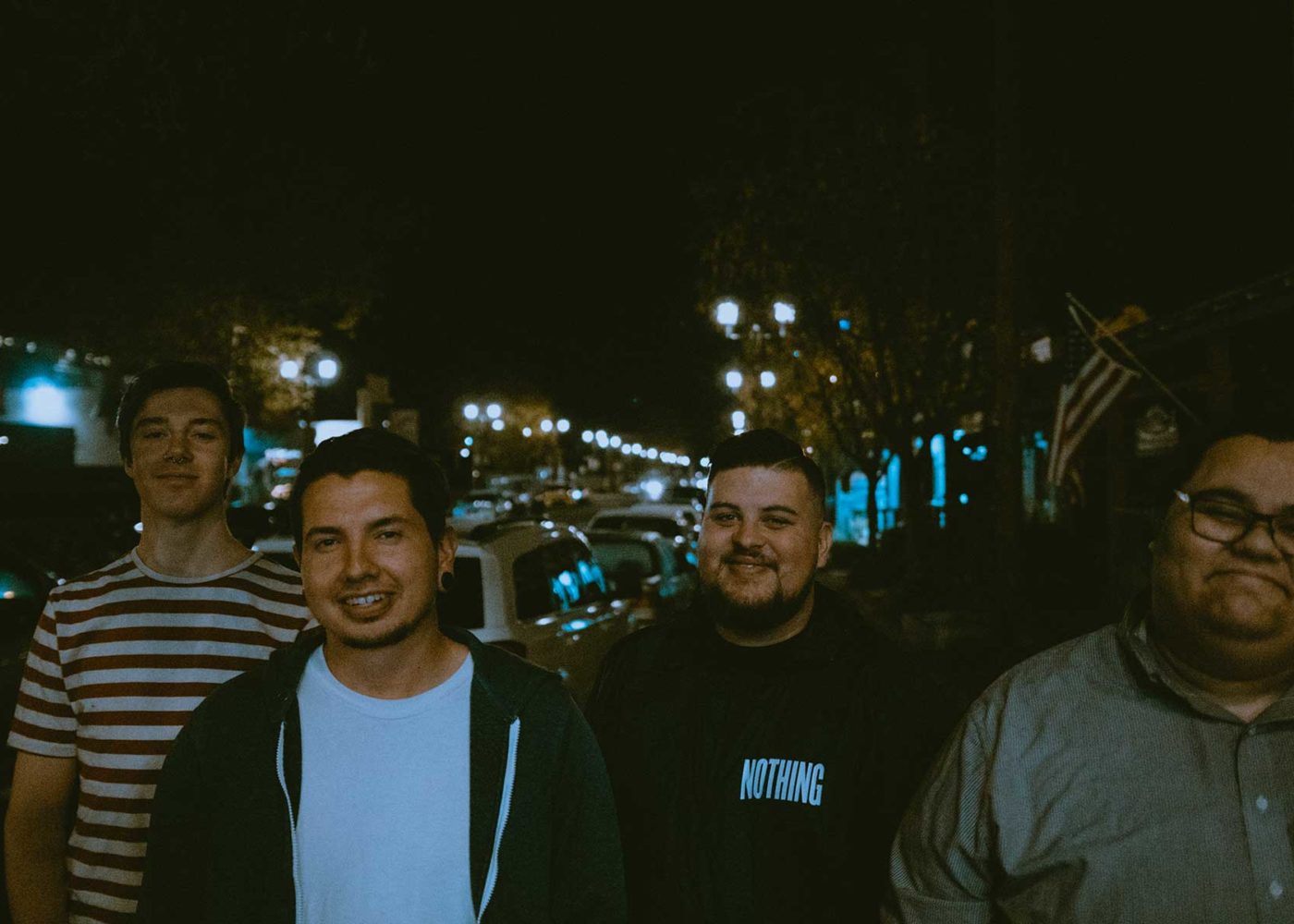 For CVLTVRE writing duo Joe Yarbrough and Ozzie Lizarraga, self-infliction was oppressive. When they found God and moved into a new phase of their lives, they sought out to help others through their music, starting with step one: let go.

“But, really, it’s more of a storytelling type of music.”

Joe Yarbrough and Ozzie Lizarraga are long-time friends that once met at a Bible Study bonfire; they now lead a worship ministry together at Awakening Church in Marietta, CA. There, they have a responsibility serving vulnerable populations struggling with a host of afflictions, from addiction to familial struggles to mental illness. They extend their personal life into their work as CVLTVRE, using everything life has taught them to inspire others and to find hope in the midst of pain through music.

The post-hardcore band, currently signed to Standby Records, is the vessel for this message, and God is the inspiration for the music they create. The soon to be released debut EP, All Life Is//Act One: An act of Letting Go, is a five-chapter book of heart-wrenching stories set to ambient guitar riffs and occasional breakdowns that are painted with aggression.

Besides owning a sound that’s easy to enjoy but hard to label, CVLTVRE seems to have a policy of full disclosure. The last track on the EP, for example, dons a grunge style, complete with words that could have come from Kurt Cobain: a transparent statement about suicide that’s curious and concerning. An admission of these thoughts isn’t a threat or an endorsement, but a voice in the dark to let someone know they aren’t alone in their fight, however dark the personal fights may be. As it turns out, these personal shadows are only a page in the origin story for CVLTVRE and their first-ever EP release.

HM: I spent yesterday listening to the EP. I really enjoyed it, but I don’t think, really, you can put it in one box as far as genre or even sub-genre. What would be your hopes for how your fans classify your music?
Joe Yarbrough: We kind of coin it “passion-filled post-hardcore.” Myself and my guitar player, Ozzie, were really influenced by bands like Thrice and Brand New that really don’t have a genre. We want people to see that we were raised on some post-hardcore influences, and that shines through the aggression sometimes. But, really, it’s more of a storytelling type of music.

Are these personal stories of your own or of people you know?
They’re a mix, actually. Myself and Ozzie, we’ve got a really serious relationship with God. I work with youth students, especially ones from broken families and from parents that don’t go to church; a lot of inner city kind of work. He works with people struggling with addictions. One of the things we’ve noticed from counseling – and we saw this pattern in our own lives because we weren’t raised Christian – is what the steps that led up to us finding God were. That’s what our EP series is about; it’s a four-part EP of what we think the steps of coming to know God are. And this one is: First, you have to let go.

The first song, “Blame,” is about how, before we give our lives to God, we have to search within ourselves. As the scripture says, before we find the speck in our neighbor’s eye, we have to take care of the plank in our own. “Blame” is really just that. Lyrically: blaming everyone and everything. You blame the weather if it rubs you the wrong way. In the song later (it’s really subtle) you can hear me yelling, “When I’m searching through this pain I find that I’m to blame.”

“Birthday Song” is about something me and Ozzie struggle with. Your birthday is the one day you should be celebrated, that you’re alive and you’re created. Sometimes, the people in your life that should be there aren’t there; both our fathers were not in our lives growing up. It really affects you as a kid, and it makes you want to give up. Me, personally, I struggle a lot with a chemical deficiency, and it’s caused me a lot of suicide attempts in my life. There’s that faintness in the bridge, “I know I’m getting kind of low but God you love me so I won’t let go.”

“Progression,” is actually a story about my friends. I used to work at a church called Cornerstone in Wildomar, and, unfortunately, our senior pastor’s oldest son, Ryan – his son, Ross, I’m good friends with – was murdered around Christmas time. That song I wrote about Ross and how he dealt with it, how the time gets away from you the longer you dwell in these things and don’t have an identity in Jesus.

“Drown,” in the same sense, is that sometimes there’s that understanding that life is just life and you can’t let things slip away.

That was actually the song I wanted to talk to you about, especially.
“Drown” is the most personal to both me and Oz. With my deficiencies, I’ve always tried to justify suicide – even as a believer – thinking maybe I can barter with God. I know that’s so wrong, but, in the moment of emotion, it makes the most sense.

The verses are about me trying to justify my actions that are definitely not holy and not right and selfish: justifying drinking bleach because it’ll make me clean, cut off air because I’ve already had too much life to live, because I don’t have much value in this world. The chorus is the reality of what’s happening in my life. Ozzie wrote those words in the chorus: “I’ve got time to kill I’ve got time to breathe, but I can’t stop me from running away from me.” When he wrote that, it really meant a lot to me.

My grandma is a big part of my life and raised me. When I moved back from Sacramento from a ministry position and everything was doing OK and we started working on music again, my grandma told me she’d gotten terminal cancer and she was going to pass away. It wrecked me. It was the first time in a long time I thought about taking my life, because, I thought, What’s left to live for? Even as a person in ministry, it was like, “Can I justify it?” when I heard those words (from her). I could have all the time in the world to spend with her and all the time to shoot the breeze with her, but I can’t stop her from leaving, especially because she was so OK with leaving and knew where she was going. Because she’s the only person in my family that’s really a Christian, it was hard to have someone so OK with that and you not.

Really, the bridge is the hardest, because it really is about the hardest moment in my life. While we were in the studio, I heard my grandma was taking a turn for the worst. It’s really just a barter with God: “How many times do you command that I prove my lack of innocence, how much I deserve to die? You’re letting people who don’t deserve it die, can’t you see that I’m mortified by what’s inside?”

It’s an angry prayer, and I know it’s something that a lot of people don’t share, especially in the Christian community. But it’s something that was straight out of a journaling I had with God, saying, I’m so angry about this situation and these things going on and you’re just gonna sit by and do nothing? Once I came to terms with it, actually, it was an awesome thing; she beat cancer and she’s still alive today.

Wow. That’s amazing, what an awesome testimony!
Yeah, it was a huge, huge thing. Ozzie wrote that chorus about this relationship he had dealt with and knowing a time would come to pass when something would have to give. It was like this universal theme for us to realize that before you finally give up something, you realize you could have all the time in the world to think about what you’re going to say, but some things are out of your control and the only way that you’ll ever be free is in God. Once you can give it to God and find peace in that, that’s when you can start living truly free.

The fact that you’re both willing to be that candid in your music is very brave. It’s hard to be that honest.
There’s something about being in this band – with Ozzie and people I’m so close with and do life with – and sharing those stories. They know my stories because they lived with me through them or we’ve grown so close over the years that we feel comfortable sharing them.

You’re right; it’s definitely a terrifying thing, but one of my favorite things to do is – before shows (especially when there’s a lot of people that are new hearing our music) – me and Ozzie take the time to pray together. We just pray, “God, you brought us here, and we don’t know why, but we’re gonna do what we do because you’ve given us this.” Music is a gift, not just to the people we give it to, but to us. It helps us be more OK with telling our testimony, which we never were as comfortable with before. It’s awesome that we have a church that supports the type of music that we do, the stories that we tell, and who we reach.

What do you want to be your legacy in this band?
I think I speak for both Oz and I that we hope, in starting this band, that it opens the conversation to people who are really broken and hopeless that there is hope and there’s freedom. Even for those who don’t believe in a God, that when they hear this music, they hear hope and they hear enough inspiration to carry on. That’s a huge thing for us.

When Oz and I were growing up, we listened to Thrice non-stop, not knowing that they were a Christian band. It wasn’t until we became Christians that we realized how much more those songs helped us, like God was always there. We hope to leave a legacy to someone like that, even if it’s two other guys that start a way bigger band than ours, you know? We just hope that people hear these songs, they can relate to them and feel not alone, and that they could someday find freedom and peace in it.

CVLTVRE was posted on February 8, 2018 for HM Magazine and authored by Danielle Martin.