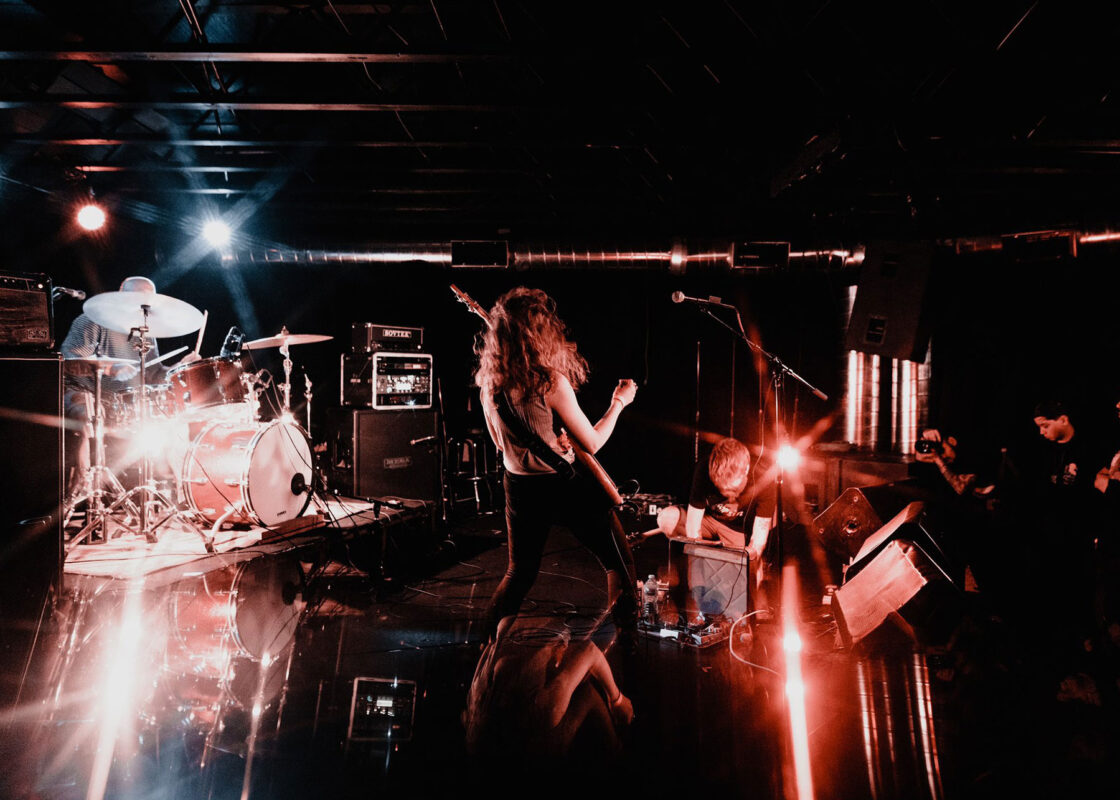 Comrades, the stylistic outlier of metalcore: A trio of which two-thirds is a husband and wife duo, inspired by metal and emo-core like Beloved, a touch of magic and intimacy cultivated through house shows and venues alike. Vocalist Laura McElroy, guitarist Joe McElroy, and drummer and vocalist John Gaskill have reinvented what post-hardcore looks like, adding a bit of contemplative indie rock to the mix; their label, Facedown Records, is known for signing left-of-center bands outside the vein of metalcore or post-hardcore, and the band’s driving force and innovative approach to melody, ambiance, and unclean vocals fit the bill. Their second and most recent album, For We Are Not Yet, We Are Only Becoming, is a beautiful picture painted for listeners who are after a deep and spiritually enriched experience. Just listen to “Smokescreen Season” for one of the best examples of this enigmatic masterpiece: With the ambiance of early 1990s records like The Cranberries, the fascination of emo, and the allure of aggression, you’ll start to understand where the future of Comrades lies. It’s a string worth pulling, worth unraveling the sweater to explore how the band ticks. We recently sat down with the McElroys to talk more about the spiritual reality within life, how soon they’ll be able to release new music, and how koalas are their new normal.

The first thing I have to ask about is what it’s like being married to your bandmate. You’re not the first married couple to share a stage, but it very much unique in an industry where lineups tend to have regular lineup changes. How many years have you been married?
Laura: Nine years

What’s it like playing in a band with your spouse?
Laura: Most of the time it’s great.

Joe: I think the easiest answer I can give is: Sharing something you’re as passionate about as the music that you’ve created with your spouse is like a really incredible experience, an incredible blessing. The downside is tour life creates an environment where you have to be able to be a bandmate and a co-worker. You have to almost turn off the marriage sometimes. That’s a whole new set of challenges. It’s definitely worth it; it’s a different lifestyle.

Your most recent album, For We Are Not yet, We Are Only Becoming, was released roughly a year ago. Were you able to get in a full tour before the pandemic shut concerts down?
Joe: We got to do a few tours on that album, but we had two tours that were canceled from COVID.

Joe: We did get to still do a fair bit of touring right after the album came out. The last show we played before COVID was Facedown Fest, which was awesome. 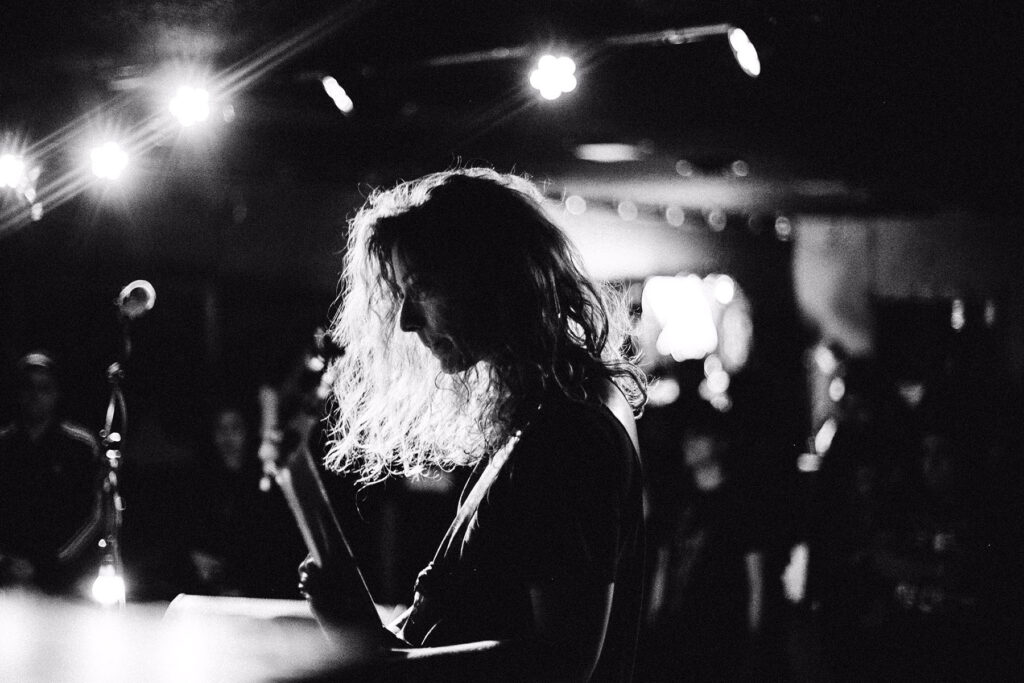 Speaking of Facedown Records, I was recently speaking with another band on the label and they were talking about the family environment Facedown fosters. How has the label been for Comrades?
Laura: When we sent Lone / Grey to Jason (Dunn, A&R at the label), he was like, “I’d love for you to be a part of our label. You should come to Facedown Fest.” And then they were like, “You should play Facedown Fest. You’re not on the label yet, but you can play.”

I remember being like, “I don’t know if I want to be on Facedown. I don’t know if we fit.” Then we met them and I was like, “Where are the papers? Where do I sign?” They’re the best people ever. They’re the greatest. They treat you with the same level of respect.

Speaking of your first album, Lone / Grey, that album was released in 2016 and For We Are Not Yet, We Are Only Becoming was released last year. Do you have new music in the form of an EP or singles on the horizon?
Joe: With COVID, I think a lot of bands have been able to do writing and get stuff out. The thing for us is, with John being long-distance, we have to weigh how important it is to get something done soon versus the risks involved with the travel.

We sent some stuff back and forth. I think that once we feel that travel can happen, we’ll probably have some stuff laid down pretty quick. I’ve always really loved shorter releases. Up until recently, for record labels, full-lengths made the most sense. Just from a marketing standpoint, it’s easier to pour maximum resources into one specific release. Now that streaming has kind of taken over and the world has changed, I think that gives a lot more freedom to the way music is released. 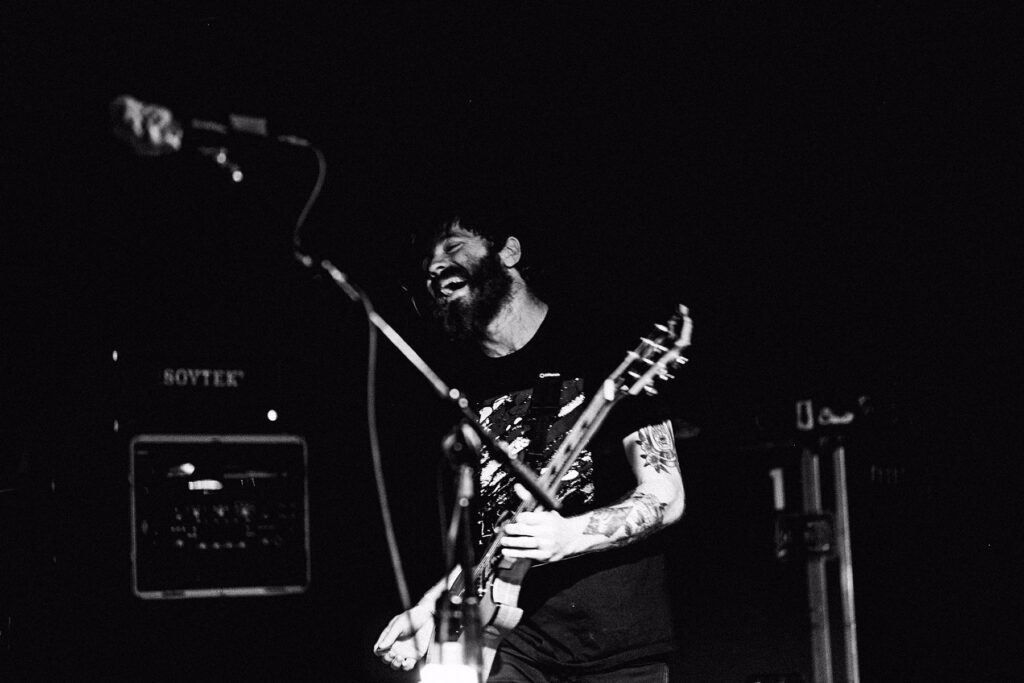 How do you describe the music of Comrades?
Laura: I feel like we’re on the post-rock side of post-hardcore. I mean, John’s yelling. That’s kind of the vein that it reminds me of.

Joe: I think what makes it difficult sometimes is that a lot of my writing style comes less from what happened with hardcore and metalcore and more of what happened with the 20-years-ago version of screamo. Growing up in D.C. and Richmond, that was a big influence. I really like the fact that it’s kind of hard to put your finger on it. Not knowing exactly how to market us was what we ran into a lot.

What influences brought about the style?
Laura: Beloved.

Joe: That part of post-hardcore that was happening with bands like Beloved and Thrice – that era was pretty foundational to a lot of us. The idea that you can play music that is still complex and interesting but it’s not metal or specifically heavy in those ways, I think is something we all kind of vibed around.

Laura: We also used to listen to a lot of melodic hardcore. Whenever we’re writing, I feel like we still have that in the back of our heads. Like, how actual melodic hardcore is this?

What have you done during quarantine?
Laura: You know all those challenges that people were doing? We did the Koala Challenge. You basically have to climb around a person and then over and under a person without touching the floor. We did that.

Joe: Yeah, that was wild.

Laura: Since we haven’t been on tour, I have a garden now. We also joined the climbing gym. While it was closed, I tried to climb the van.

That’s great (laughs).
Joe: This isn’t silly, but now that we’ve been home so much, we’ve been camping a ton.

Laura: Because outside is safer. Everybody else feels really abnormal, but for us, nothing is normal. So, it’s been kind of nice to not have to drive everywhere.

Joe: We’re used to three weeks of your life on tour, then you’re home for three weeks, then repeat. It’s hard to have a routine and have some of the stability that most modern adults have. It’s something that, for us, feels somewhat foreign. It’s actually pretty cool to try to be normal adults for a while. 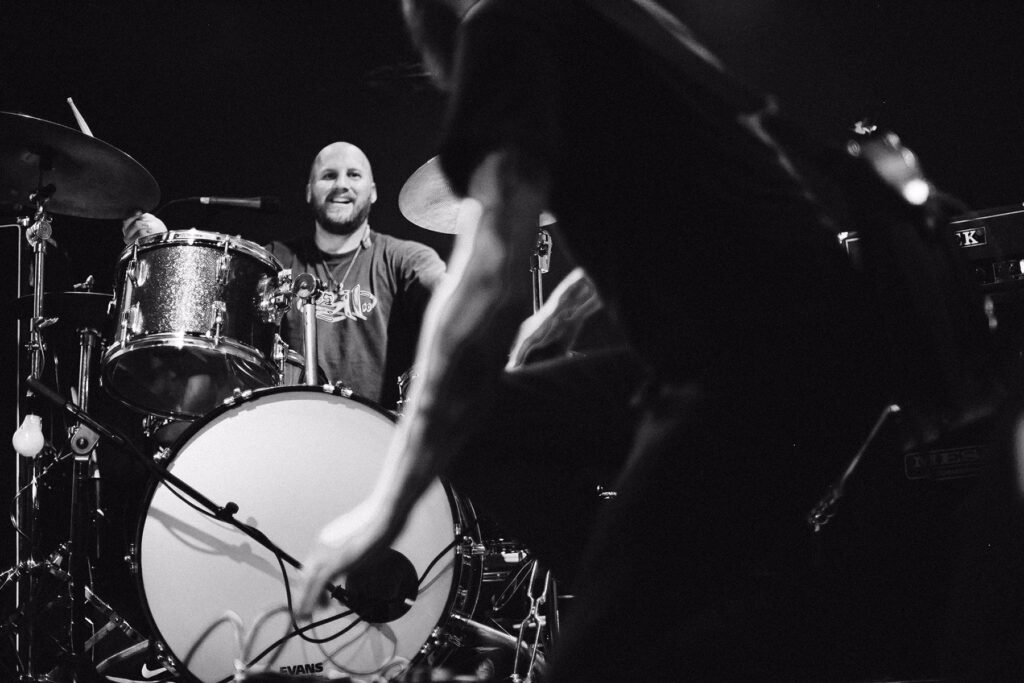 The past five months have been very difficult for bands who have lost revenue from canceled tours and live shows. For fans of Comrades, how can people best support you during this time?
Joe: Buying merch is definitely the right answer here. A lot of labels have given bands the freedom to do their own merch sales, and that’s what Facedown did with us. If you buy something from the label, we see a little bit of that. But if you buy something directly from us, we get the whole profit from that.

Laura: We literally had gotten merch for the tour we were supposed to go on, then it never happened (laughs). You still have to pay for your merch. Our fans are super generous, and we had people asking like, “What can I do?” People doing giveaways with our merch; that was really cool. We still have merch up on our website. It would be cool to come out of COVID with no merch.

Joe: Streaming is awesome and it’s something we have to embrace and move forward with, but you’re looking at hundreds of thousands of streams before there’s any sort of real money coming in from that. Probably the best place is buying merch from the band or buying music off one of those tangible sources.

How does faith and spirituality play into your lives and your music?
Joe: All three of us are Christians. We all come from somewhat different backgrounds and stories and journeys through that. I was not raised in church and came from a much more agnostic/scientific place. Before the virus, we had a local church that we’ve been going to in our neighborhood. I’m not even 100% on-board with them theologically, but they do a lot for this community and they were in trouble with the city because they were feeding homeless people too much.

A lot of my initial understanding of theology was my reading. They told me, “Read the Old Testament and just try to understand the beginning of the Old Testament.” I looked at that from my own life experience and that interpretation. Ever since then, I’ve had trouble with how that seems different sometimes from the Western church. I’ve spent some time trying to learn more about Orthodoxy and some of the more Eastern parts of the Christian faith.

Laura: I think that, for me with my story, everything that has ever happened in my life that has meaning seems to have spiritual meaning. I can see how, whenever I feel like things are hopeless or things are dark, it’s because I’ve lost sight of that.

I feel like when I write or create something, everything has this redemptive arc about it. I think being a creative person you realize you’re made in the image of God, therefore creating is part of being made in the image of a Creator. I think when you see that in yourself and other people, it allows you to be more like Jesus. Like, we are the same in a lot of ways and different in a lot of ways, as well – but, fundamentally, you have the same spirit that has formed you and made you for your purpose.

Comrades was posted on September 4, 2020 for HM Magazine and authored by Andrew Voigt.