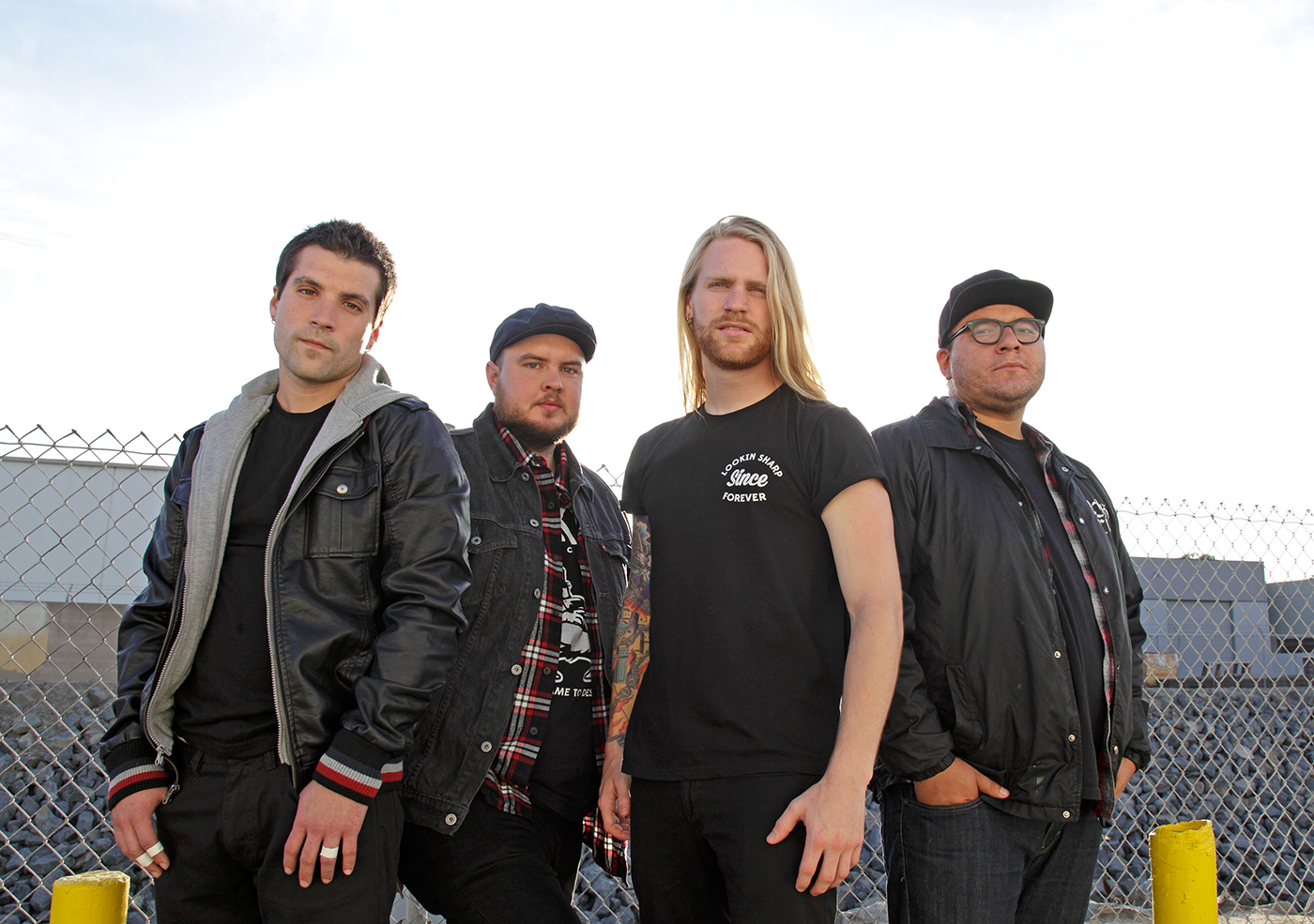 With a new lead singer, Close Your Eyes might bend, but they'll never break

Close Your Eyes took the last year off to regroup and find its new voice with ex-Blessed By A Broken Heart vocalist Sam Ryder Robinson. With its third full-length album, Line In The Sand, coming out later this month, I was able to chat with Robinson and guitarist and founding member Brett Callaway. Despite some nuances coordinating an across-the-pond interview, we talked shop during some down time before a show in a bomb shelter converted into a venue in Austria.

Losing a singer can make or break a band, but Close Your Eyes has never been a band to break under the pressure. Callaway explained to me that, even though previous singer Shane Raymond had left the band, they were still in a position to move forward as a band.

“I wrote everything,” Callaway said, “so it is not like the songwriters left the band. Sam has a bigger vocal range than Shane has, so with that, we are now about to do things we could not do before, sonically.”

Having to come back from a few member changes can make a band feel like they are starting all over again. For Close Your Eyes, it ended up being a speed bump.

“We do feel there was a glitch there for about a year,” Callaway said. “Now that everything is in place, we feel stronger than we have ever been as a band, as far as musicianship and songwriting. This record we are about to put out is the best record we have ever done.”

As a person looking from the outside in, I was wondering what the future would hold for the band with the lineup changes.

“The shows over here have been nuts, so far,” Callaway said. “It has been stage dive city, and kids are going crazy, singing along to every song.”

It’s a good indication the band’s mini-tour with Gideon in late October will do well. It’ll be their first tour back in the U.S., but more importantly, their first tour after the release of Line in the Sand.

The band is in Austria spreading their good word, and for some of them, it’s not only their first tour over there, but also their first time period. I was curious to know if they had tried anything they couldn’t have tried in the U.S.
“I am a very adventurous eater,” Callaway said. “So I just find out what the local food is. I have really enjoyed it so far. I tried blood sausage; that was interesting. I also had wiener schnitzel in Austria and Germany. It was a little more delicate and tender than what it is like in the States. It is done right here, seeing this is where it was originated.”

Being a band and seeing new sites can always be fun.

“Europe is really rich in culture,” Callaway said. “We have gotten to see the cathedrals. They are the best sights we have seen so far on this tour. We went to Newcastle. We saw Parliament and City Hall. We went to the fjords in Norway; that was really cool.

“Some of the guys in other bands have shown us some cool things as well,” added Robinson.

The locations of music venues in Europe are often quite interesting compared to American venues, too.

“We have been playing a lot of venues that are literally underground,” Callaway said. And he means literally, as in subterranean. “We have played a few outdoor shows. There are no set venues here. It’s wherever they can throw the show. That’s where they have them here.”

For their third overall effort, the band went back to Maple Studios in Santa Ana, Calif., the same place where its sophomore record, Empty Hands and Heavy Hearts, was born. For most of the guys in Close Your Eyes, this time around, it was just another day at the office.

“(Recording) is definitely stressful, seeing you are there for 12-13 hours a day,” Callaway said. “Though I do enjoy the process, I do not like how long it takes sometimes.”

As the new guy, Robinson knew that both recording and touring would present new challenges. He, of course, did not want to mess up the synergy the band had developed over the years together. “For me it was a stressful environment,” Robinson added. “Being the new guy on tour is very different from being the new guy in the studio, so it was different working with guys who have worked together in the studio two times prior to this.”

Going into the studio to record an album is different for each band, to say the least. Some bands have everything ready to go, having their songs practiced and perfected for months before even stepping into the studio. Others use the sectioned-off time almost as therapy, a catharsis to write, using the time to explore the emotion and direction they want to convey with their work. For Close Your Eyes, they pulled a little from Column A, a little from Column B: They had written so much music they had to trim the fat, so they left the lyric writing for the studio and also used the studio time as a kitchen to mix, experiment and create their offering. “When we went into the studio, (our music) was evolving the whole time,” Callaway said. “We went in with 32 songs or parts of songs, and we cut them down to 17 songs. Only a few songs sound the same from when we wrote them to the final recording. All of the others were changed or combined to make one song while we were in the studio.”

Robinson was in uncharted territory. As he was learning the ropes with a new band, he was also learning a new style of music. For him, it was a positive experience.

“As long as I like what the band is doing and the music is good, then I am all for it,” Robinson said.

That doesn’t always mean “easy.” During my time with Robinson, he admitted it was difficult to always get the words to flow.

“The lyrics were tough for a while,” Robinson said. “It took me a moment to get into it. There were a few songs that already had vocals for them. Brett and I wrote a few songs together at his house before going into the studio. I wrote the rest of the vocals while we were on a break at home.”

And let’s not forget they started with a ton of songs that needed lyrics to begin with. “Lyrics were the toughest thing to get done on this record,” Callaway added. “Doing lyrics for that many songs can get tiresome, though we did make it a group effort, writing lyrics while we were in the studio. We are still addressing hope and love. Sam really touched on the youthful spirit, along with using your imagination and creativity.” Robinson immediately followed him up: “I also address freedom, and the definition of freedom. I also talk about technology, and how it is taking over the spirit.”

With the band being overseas, we had to use some of that technology to conduct the interview, and with that comment, I had to dig deeper to find out how our phones were murdering our spirits.

“It irritates me,” he said. “For example, seeing we don’t have cell phone service. We are all going mental when we (don’t have) WiFi, searching for WiFi like vultures. I have a phone and a backpack with clothes in it.  Though I wish I didn’t have a phone,” he said.

The phone call we made was free of charge because we talked through the Internet, but there was a time when something like that would have cost an arm and a leg. “Interviews were more personal then, because it meant more,” Robinson said. “I think that the words were more treasured because you had a phone bill after.”

Ironically, right after Sam said that, our call got disconnected.

Through it all, Close Your Eyes has banded together, stronger than ever. No cell phone, technology, lineup change or new singer has messed with the band’s vibe. It’s a good place to be when recording an album.

“We were in a good mental, emotional and spiritual state in studio,” Callaway said. “Everything seemed to flow well, even with any disagreements we had. It was much more pleasant this time around than the last time we were recording.”

And the results show it. Line in the Sand is a great piece of work, and whether Robinson likes it or not, you can like it on Facebook and share it with your friends. Just make sure to say hello to him in person when he comes to your town.

Close Your Eyes was posted on October 7, 2013 for HM Magazine and authored by Rob Houston.