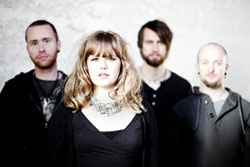 The Swedish female fronted melodic metal band END OF SEPTEMBER will have a digital single out for the track “Isolated” on April 11th. “Isolated” is the opening track from their self titled debut album that will be released on May 11th in Europe and on May 22nd in North America, through Ulterium Records.

A music video for “Isolated” was recorded in Gothenburg with 11Frames Productions earlier this year, and it will be released online during the coming weeks.

END OF SEPTEMBER is definitely one of the most promising bands from Scandinavia at the moment. This young band shows with their debut album that they know how to create fantastic, memorable songs, and perform them to perfection. They have also been able to successfully create a mix between melodic metal and more modern metal that not many bands have.

With the well-crafted and intelligent song-writing of Erik Tordsson and the smooth and emotional vocals of Elin Redin, End of September is a force to be reckoned with during the coming years. The band is hungry to hit the stages around the world, and are destined to make it.

The self-titled debut album from End of September will be released on May 11st in Europe and May 22nd in North America through Ulterium Records.

Check out an album teaser over at YouTube: http://youtu.be/xgOvMJehTzs