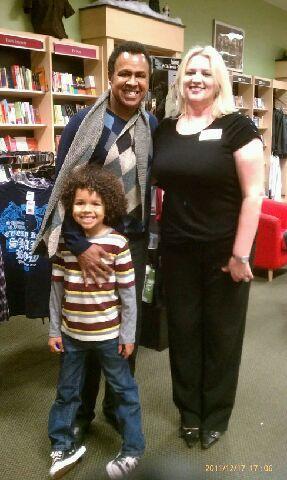 Eddie Hedges recently met with Berean Christian Store officials in Cincinnati, OH on December 9, when he was home to participate in the Grace Chapel Christmas program and to perform and do an interview for a local television show, Cincinnality.
The meeting with Berean led to a partnership that will help to promote his latest effort, Celebrate Christmas, as Berean offers its customer base the CD in their stores.
“When you hear Eddie Hedges sing, you hear his heart! We are so blessed that God has led us to this partnership of spreading His Word through Eddie’s music!” said Denise Chaney, Marketing Manager, Berean Christian Stores. “We look forward to 2012 and watching the places God takes Eddie and the lives that are forever changed through his ministry!”
Celebrate Christmas and performances by Hedges were supported by two in-store appearances in California at Berean’s Riverside and Redlands stores on Saturday, December 17.
“I am excited about what God is doing through the partnership with Berean and I look forward to ministering to even more people,” said Eddie Hedges.
Celebrate Christmas contains Hedges’ renditions of popular Christmas classics, including “Silent Night,” “O Holy Night,” “Go Tell It On The Mountain,” “Little Drummer Boy,” and “The First Noel,” among others.
In addition to Celebrate Christmas, Eddie Hedges also recently released his third solo album, Faith Like a Child. Faith Like a Child is a follow up to Hedges previous solo efforts, Sonday (2006) and Something to Believe In (2004).
“The title for ‘Faith Like a Child’ came from what it says in the Bible about having faith like a child. As we get older, we get caught up in the stress of the world and we need to get back to that. Children don’t stress like that. We can’t control everything. Sometimes, we need to learn to get off the throne, put God back on it and trust that He is in control.”
Ultimately, Hedges said the theme of the album focuses on standing in faith and putting our trust in God.
“I want people to understand what faith like a child really means. Kids don’t worry about things like money, power or job security. They don’t stress and they just trust that everything is going to be okay. As adults, we need to be more like that,” he continued.
Originally from Cincinnati, Ohio. Hedges began singing and playing drums in church at age 13. It was there that he gave his life to Christ.
Throughout his longstanding career, he has toured with many notable acts, including Bel Biv Devoe, Sheila E., Johnny Gill and others. In the mid-1990’s Hedges became a founding member and drummer of the multi-platinum band Blessid Union of Souls. After close to a decade of touring the world, the group released four albums, which were driven by a string of hit singles, including “I Believe,” “I Wanna Be There,” “Light in Your Eyes,” “Let Me Be The One” and “Hey Leonardo,” Hedges left Blessid Union of Souls in 2003.
For more information about Eddie Hedges, visit www.eddiehedges.com and www.berean.com. For additional press materials, or to schedule an interview, contact publicist Ginny McCabe at (513) 604-6720, or at McCabemedia1@aol.com.