Daisy Rock adds Rachel and Rebekah to its roster 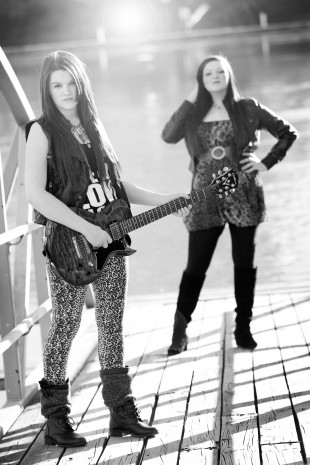 Daisy Rock Girl Guitars, the original girl guitar company, welcomes to its artist roster Rachel and Rebekah, a sister duo that explodes with a rock and pop sound for the masses.

It was back in kindergarten when Rachel and Rebekah first sang in front of an audience at their school plays. They soon sought out other places to sing and share their talent, including festivals, schools, theme parks, and sporting events. They also formed part in Christ Chapel’s music ministry in Madison, CT, with their youth pastor and Nashville Christian recording artist, Ryan Baker

In 2007 Rachel and Rebekah moved to Nashville with their family to further their musical journey. The girls started taking vocal lessons from the famed Music Row’s Buzzy Orange Studio, whose students include Faith Hill, Amy Grant and Carrie Underwood. In 2010, they had an opportunity to be extras in a Christian TV Show called Ishine Knect where they met producer Kevan Cyka, who later produced their debut album Lovin’ Me Blind, released in 2011. Dan Needham – music engineer, drummer, and session player for the artists like Michael W. Smith, CeCe Winans, and Chris Tomlin – collaborated with Kevan Cyka and brilliantly created the girls sound which is considered the “Katy Perry” and “Ke$ha” of Christian teen music.

“These sisters have an amazing talent for that pop-is-so-fun to run around and dance to music – they just make your feet do the happy dance!  We are so proud to have them be part of the Daisy Rock Girl Guitar family! Go Team PINK!” says Tish Ciravolo, President and Founder of Daisy Rock Girl Guitars.

Rachel and Rebekah are geared up for a major summer tour!!!!  Check out their website for tour dates and visit rachelandrebekah.com.  And follow them on twitter.

Daisy Rock Girl Guitars offers a complete line of quality girl guitars designed to look and sound great, and to fit the female form.  For more info, or to find a dealer near you, visit daisyrock.com.

ABOUT DAISY ROCK GIRL GUITARS
Daisy Rock Girl Guitars is the original girl guitar company dedicated to successfully supplying and marketing professional quality guitars for females of all ages. All Daisy Rock guitars are designed specifically for the female form and feature lightweight bodies, “Slim & Narrow” neck profiles to better fit smaller hands, and are available in inspiring finishes. Daisy Rock Girl Guitars’ ongoing mission is to do whatever it takes to help girls play guitar and enjoy music.

Daisy Rock Girl Guitars is led by its Founder and President, Tish Ciravolo. Ciravolo is a highly acclaimed expert on female empowerment and females in music. Tish’s expertise has been immortalized by her induction into the Museum of Making Music, the world’s premier museum showcasing the history of the music products industry, and she is widely regarded as a visionary in the industry. Ciravolo’s deep insight into the subject of girl guitars and female empowerment has made her a sought after and frequent contributor on national and international television, newspapers, magazines, websites, and radio programs including People, Time, Newsweek, CNN, ABC, NBC, FOX, VH1, the Premier Radio Network, BBC Radio, and the Associated Press. Daisy Rock Girl Guitars is in over 25 countries worldwide, and is co-owned and distributed by Alfred Music Publishing.