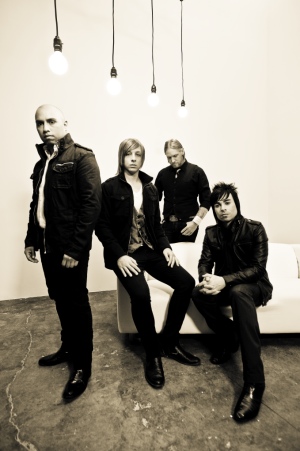 Gabe Martinez, founder and lead singer of the critically-acclaimed Christian pop/rock band Circleslide, is featured in the opening story on today’s episode of the Christian Broadcasting Network’s (CBN) 700 Club Interactive, which airs daily on the ABC Family Channel.

In a segment titled “The Prodigal Son,” Martinez and his father, Ramon Martinez, share how Gabe ran away from home on Christmas Eve when he was 17. In the months that followed, Gabe, who had left to join a band, became involved in a lifestyle that included drinking and sleeping in friends’ cars. His family, his father said, never stopped praying for their son. The Martinez family’s story had a happy ending. After several months, Gabe quit the band and returned home, where he rediscovered his faith.

“Once I allowed (God) to be everything in my life,” Gabe says, “He gave me back music and I was able to use it for His glory and for His kingdom.”

Like the father in the Bible’s prodigal son story, Gabe’s dad welcomed his son home.

“I see how it was God orchestrating these things,” he says. “and we really are grateful for the work of the Lord.”

About Circleslide:
Since the band’s debut project, which landed them on Christianity Today’s list of “Best New Artists,” among other accolades, Circleslide has toured unceasingly, refining their modern rock ruminations, while keeping their ministry agenda firmly in focus. In addition to shows with newsboys, tobyMac, MercyMe, Casting Crowns, Salvador, Jaci Velasquez and downhere, the guitar-driven band has headlined everywhere from clubs to churches and colleges, with plenty of youth camps and outreach events in between — all of which build off the group’s Youth With A Mission beginnings.
The band was developing Echoes of the Light in May 2010 when Nashville was hit with a devastating flood which destroyed Martinez’s house, as well as all of the band’s gear, instruments, PA and trailer. Circleslide’s ordeal, and the season of spiritual reassurance which followed, directly inspired the band’s recent songwriting. “We have a renewed realization that God has called us to this ministry, says Martinez. “Nothing’s going to hold us back from spreading His word.”

About 700 Club Interactive:
700 Club Interactive is a 30-minute program produced by the Christian Broadcasting Network (CBN), a global, nonprofit ministry preparing the nations of the world for the second coming of Jesus Christ through media, prayer partnering, and humanitarian aid. The show is designed for viewer interaction with hosts Gordon Robertson and Terry Meeuwsen. Its chat community, Skype, live phone calls, and social networking ensure live ministry and a community of prayer for viewers.

CBN broadcasts in 136 countries and 42 languages. For more information about 700 Club Interactive or CBN, go to cbn.com.